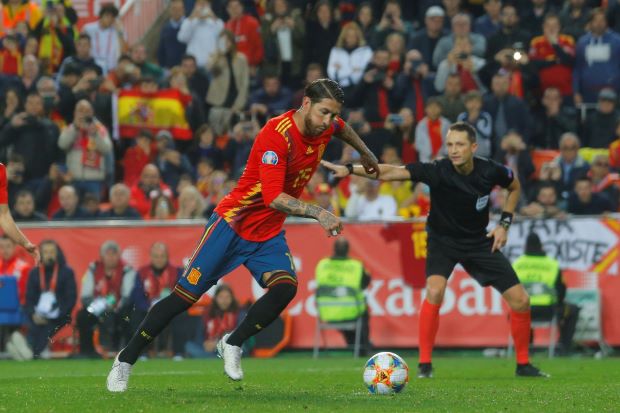 VALENCIA, March 24: Spain captain Sergio Ramos scored another “Panenka” penalty to give his side a 2-1 home win over Norway on Saturday in their opening Euro 2020 qualifier but it was a far from convincing display from Luis Enrique’s side.

Spain made a slick start and took the lead at Valencia’s Mestalla stadium when Rodrigo Moreno volleyed in Jordi Alba’s cross from close range in the 16th minute and continued to dominate proceedings without carving out many clear chances.

Norway, who had done little in attack, levelled in the 65th minute with a perfectly-taken penalty from striker Joshua King, who blasted the ball beyond David de Gea after Inigo Martinez had hauled Bjorn Johnsen to the floor.

Spain earned a spot-kick of their own six minutes later when Alvaro Morata was tripped by Norway goalkeeper Rune Jarstein, who Ramos easily deceived by chipping the ball down the middle of the goal to score a “Panenka” for the fifth time this season and eighth in his career.

“We have begun a new journey and what better way to start than with a win over a team that made things very difficult for us despite the fact we had the ball the whole time,” Ramos told reporters.

“We knew it was going to be difficult but we still played well and perhaps should have had a bigger advantage at halftime. Still, we reacted well to their equaliser and the win will give us more confidence.”

Spain’s players had talked of the importance of making a flying start to the qualifying campaign after their confidence had been knocked by a dismal World Cup and a disappointing finish in the UEFA Nations League.

Luis Enrique had named an experimental squad for this game and the trip to Malta next Tuesday but there was a familiar feel to his starting line-up with the exception of veteran Jesus Navas, who made a first start for the national team since 2014.

Spain made a promising start in front of a near-capacity crowd and got their breakthrough when Barca left back Alba played a one-two with Marco Asensio to cut down the flank and play a simple cross to Rodrigo who could hardly miss.

The home side dominated possession but lacked a cutting edge in attack as Morata missed a series of chances, drawing a couple of saves from Jarstein and failing to hit the target with a free header.

Morata compensated for those misses by helping Spain restore their lead after King had levelled against the run of play, darting on to a through ball and colliding with the desperate Jarstein, who was then fooled by the nerveless Ramos.

Asensio should have sealed the victory when played through but his attempted chip sent the ball over the bar.

Norway pressed Spain back into their area in added time but never looked like finding another equaliser.

Spain joined Malta and Sweden on three points in Group F after those sides also earned 2-1 wins in their opening fixtures.

Luis Enrique said his side should have scored more goals but was happy with the performance.

“We have to appreciate all the positive things we did today, I think we deserved to win 5-1 or 6-1, but in football goals is the only thing that matters,” he said.

“I’m happy with everything, the attitude, the way we played after training hard all week and for creating chances against a team who defended in their own half. It was a shame we conceded the penalty but we found a solution, and we realised that if you want to win you have to suffer.”

Scoring becomes key as Spain and Poland meet at Euro 2020

SEVILLE, Spain, June 19: Spain and Poland will have a common challenge when they meet Saturday at the European Championship. Read More...