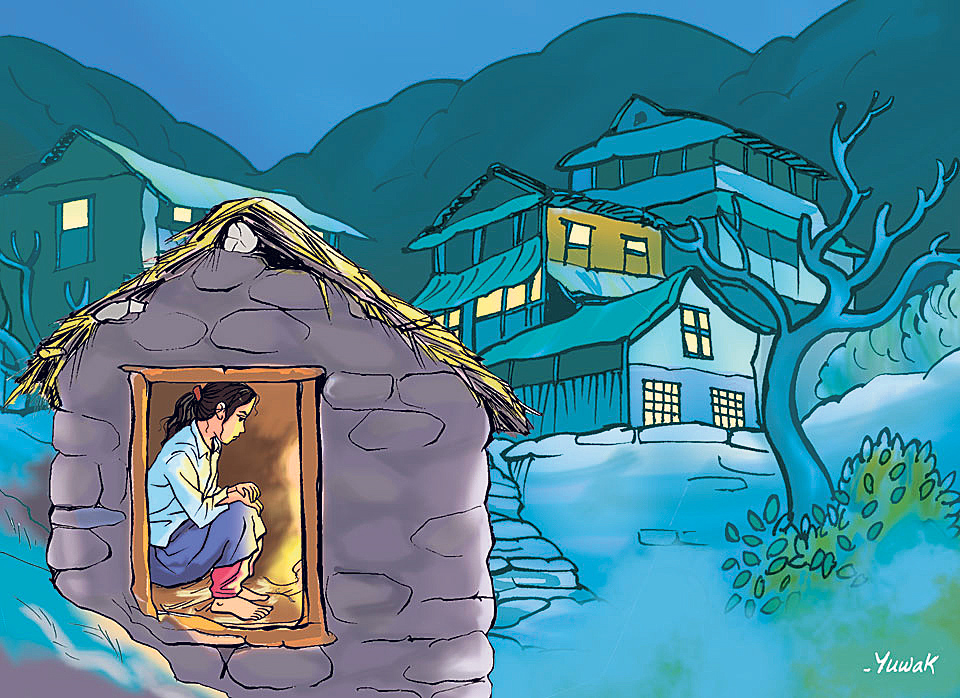 One was ardently expecting that the criminalization of the centuries-old chhaupadi custom by parliament would be welcomed by encouraging voices and unequivocal endorsement of a landmark legislative move. Unfortunately, there was far too much skepticism about the eventual efficacy of the move to accord adolescent girls and women dignity and honor and put an end to superstition and brazen orthodoxy.

The doubtful voices were, no doubt, disappointing and dispiriting, but they were not entirely misplaced either. After all, it took our parliament inordinately long to enact a bill making chhaupadi a criminal act. (Also, the law will become effective from August 2018). The Supreme Court had pronounced the despicable custom unlawful a decade ago. So much for our politicos’ concern to root out social ills in Nepal! But better late than never.

While the development is indeed a major step towards women’s empowerment and emancipation in our highly patriarchal society, it has several ramifications that have been hitherto largely ignored.
I wish to highlight the initiation of a scientific temper which the chhaupadi ban may herald. The potential is there. By scientific temper I am not pointing to empirical and precise principles of physics, chemistry, etc. I am talking about a way of life where rationalism and reason fight deeply entrenched dogmas and superstitions. No doubt, discoveries of science enable us to shatter the orthodox beliefs and archaic arguments perpetrated and perpetuated by powerful quarters like shamans, priests, self-styled god men, and the like. Science, by its very nature, makes us more evidence-based. The mind rules the heart.

Blind faith
Even in an under-developed country like ours, we are surrounded by the wonders of science and technology. We have embraced automobiles, both public and personal, we fly in jets and helicopters, we use mobile telephony to remain connected, we willingly opt for latest medical techniques and therapy and we are all too eager to migrate to developed and advanced countries which are known for their systems based on reason and its actual practice in life.

Yet when it comes to ourselves, we allow faith healers and charlatans to dictate our way of life, particularly in the rural and remote areas. The biggest victims are the most vulnerable section of our society—girls and women. In the process, a large section of truly religious and spiritual leaders also come under a cloud.

Recent reports simply reinforce the reality that dogma has dug its way into the vitals of our society. Unfortunately, women themselves are the biggest believers in this bundle of lies. Unwittingly and unknowingly indoctrinated in beliefs like chhaupadi by selfish brokers of faith, women are the ones to impose and enforce this hideous tradition on successive generations of their gender. Little do they realize that practices like chhaupadi find no mention in Hindu scriptures!

One could not help but notice how the foreign media chose to project chhaupadi as an integral part of Hinduism, yes Hinduism. How an evil man-made practice started personifying Hinduism is both baffling and painful. Scorn is being heaped on the world’s most ancient faith which gave the unique concept of vasudhaiv kutumbkam (‘the entire world is our family’) and never discriminated between believers and non-believers. In its pristine form, Hinduism offers equal and equitable space even for agnostics and atheists. And it does not have “saving souls” through conversions as its mission.
But self-seekers turned brokers and self-appointed custodians injected pernicious practices in the society. Let us admit today that we too acquiesced in their mischief and malevolence by acting as dumb sheep for as long as one can remember.

One could not help but notice how the foreign media projected chhaupadi as an integral part of Hinduism.

In a way, we became accomplices of the manipulative usurpers and inflicted wounds on our society. The guardians of faith scarred the common folk’s psyche to the extent that it became a part and parcel of the gullible people’s life. All this may not sound politically correct in these intolerant times but the truth needs to be trumpeted from the rooftops.

It is imperative that the civil society and the state do so at this juncture because mischief mongers, who are losing their hold on girls and women, are going around threatening divine wrath and curse if chhaupadi is shown the door.

Room for improvement
While the success of the ban on this demeaning and shameful tradition demands major social transformation, the state cannot abdicate its responsibility. Having slept over the Supreme Court’s decision for a decade, the state’s credentials in this issue are nothing to crow about. But there is scope for redemption.

Firstly, the three-month punishment with or without a petty fine of Rs 3000 is hardly a deterrent. It needs to be made more stringent. Far more important is strict enforcement because deep-rooted social norms and vested interests may make that difficult. Recent surveys have shown that a very large section of the affected population in the country’s western and middle regions is still not aware of the ban. The government’s publicity setup needs to get its act together. The independent media, obviously, has a big role to play in this major social reform movement.

Coming down to the very basics, the government, NGOs and corporate sector need to incentivize women self-help groups to make and sell affordable and eco-friendly menstrual hygiene solutions: sanitary napkins. One may find it hard to believe but field surveys have shown that most under-privileged women in the sub-continent find themselves compelled to use unsterilized rags, sand, ash, husk and even leaves and mud during menstrual periods. They end up contracting infections. But few are willing to discuss this stigmatized subject.

It is heartening that many women groups and cooperatives have risen to the occasion and have started making affordable sanitary napkins which have even earned brand recognition in their respective areas. In the process, employment opportunities have also been created for women. Such start-ups and groups deserve help and guidance from all quarters, with the state taking the lead. After all, we are talking about the health needs of half of our population.

It is criminally stupid to treat menstruating women as untouchables. But for menstruation, we would not have been born. There would have been no human race.
Indeed a most scary thought!

The author is a poet and writer and also Chairman of BLC and Basant Chaudhary Foundation. Views are personal

Photo journalists and their equipment to be insured

KATHMANDU, Aug 24: Here's good news for photo journalists in the country. Now their health and camera will be covered... Read More...

Imported chemical fertilizers being supplied to districts
27 seconds ago