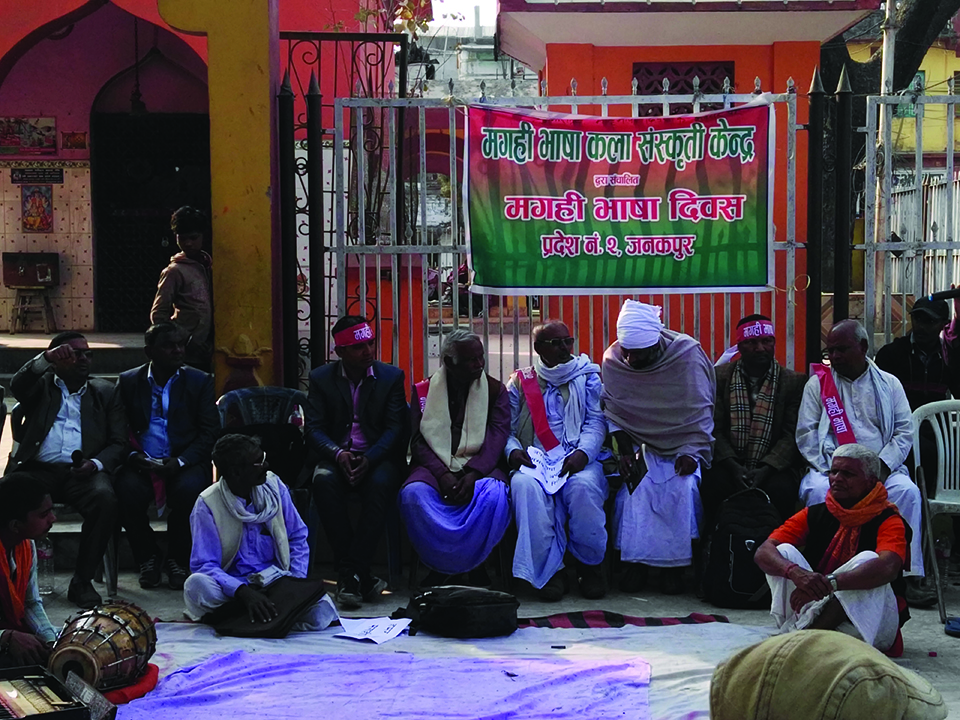 Madhesh has lost another round to the PEON, but struggle for dignity, equality, autonomy and identity is invariably a long one

JANAKPUR. On the International Mother Language Day, this politically conscious town is unusually quiet. But for a symbolic assembly of Magahi proponents, nobody seems to have realized the significance of the day. More likely, denial of the self is in vogue these days in entire Tarai-Madhes.

The desire of the town to retain its distinctiveness has remained strong. Mauni Baba, a Hindu ascetic of the early twentieth century, was the first protester to acquire the royal recognition of a Vaishnab identity for the settlement. During the first decade after the Shah Restoration (1950-60), Vedanand Jha and Raghunath Thakur did rise from the eastern parts, but it was Ram Narayan Mishra from within the Nepali Congress fold that managed to have the most profound effect upon Madheshi empowerment.

In the first decade of Shah Despotism (1960-70), Durganand Jha hurled a homemade explosive at the motorcade of King Mahendra and drew the attention of the world towards the-then sleepy town. Retroactive laws were passed to confer death penalty upon the conscientious youngster. Schoolboys of Yadukuha—now appropriately named Shahidnagar—kept the tradition of martyrdom alive in the next decade (1970-80) when they were shot dead by the police for resisting state atrocities.

In the early-1980s, the so-called Harka Gurung Report refused to recognize that the demographic aggression upon the ancestral land of Madhesis was from up north rather than from down south. In the hands of demagogic ethnonationalists of rabid rightists and extreme leftists alike, its contents were interpreted to harass Madhesis everywhere.
In the eyes of the PEON, Madhesis have always been treated as guilty until proven innocent with the burden of proof upon the accused. The Gurung Report exacerbated the situation. Geopolitics of South Asia after the Soviet invasion of Afghanistan was indeed a crucial factor behind the way politics unfolded in Nepal in the 1980s, but that alone doesn’t explain the ruthlessness with which the regime responded to even peaceful and often constructive protests.

The republican revolutionary Ramraja Prasad Singh was from Saptari and so was Gandhian messenger of harmony Gajendra Narayan Singh. Both recruited some of their most devoted followers from the area in and around Janakpur. The Sadbhavana apostle held his first public meeting in Jaleshwar with Ramchandra Mishra of Pipra and Krishna Dev Lal of Suga among only a few others by his side.

It’s not clear whether philanthropic physician Laxmi Narayan Jha was actively associated with the pioneer of republican revolution, but he did indeed share with his patients the information that a ‘monkey army’ was being trained by the modern day Ram to unseat the ruling Ravan. Soon after, he became the first notable case of ‘forcibly disappeared’ in Nepal. His whereabouts remain unknown to this day.

The security forces mowed down peaceful protesters in Shahidnagar in the movement of 1990 too and the first and biggest rally against the royal-military regime at the culmination of creeping coup of Chairman Gyanendra took place at the local Rangbhoomi grounds. In all the three Madhes movements, the town remained an ideological and political capital even as mobilization was more intense in various places such as Biratnagar, Lahan, Gaur, Birgunj, Kathmandu, Bhairahawa, Nepalgunj, Tikapur and Dhangadhi.

Naturally, when the Madhes Movement faltered with the signing of 16-Point Conspiracy and failed with the promulgation of the controversial constitution, ideological champions of Madhesi identity in its capital city lost face. They try hard to hide their moral defeat in the apologia of having prioritized development over devolution, but the ‘moth-eaten’ Madhes is a testimony to the inconsistencies of their position.

Little wonder, Upendra Yadav, once an undisputed leader of ‘One Madhes, One Pradesh’ slogan and supposedly a victor with both the provincial chief and the chief executive of the Central Madhes State from his party, averts his gaze while talking to inquisitive sympathizers. He has disowned the Madhes qualifier and renamed his outfit Sanghiya Samajbadi, which seems to emphasize administrative rather than political federalism due to its association with the political economy of socialism rather than the cultural politics of identity, dignity and autonomy. Mahanth Thakur heads Rastriya Janata Party Nepal (RJP-N) and is a ‘nationalist’ by implication.

Ideology has never been the decisive factor of South Asian politics. The Quaid created Pakistan on the basis of religion. Language got an independent state for the Bangabandhu. Religion and language together unite the dominant Sinhala majority in Sri Lanka. Primacy of Sanatan Dharma, with attendant dogmas of Brahminism and casteism, has remained the central feature of Nepali politics. The combination of linguistic states in a federal and secular polity is an Indian experiment. Unfortunately, resurgence of casteism has negated the influence of modernity. Due to the strength of the caste hierarchy, secularism has failed to take root in Hindu society despite the assumed tolerance and supposed resilience of the ancient faith.

Among the seven states of Federal Nepal, Central Madhes appears most progressive on surface. The head of the state comes from a caste that constitutes less than half-percent of the national population. Despite his reassuring name for Hindu zealots, the Chief Minister is a practicing Muslim. The Speaker of the legislature boasts of a so-called Backward caste background. Stalwarts of an assertive Other Backward Castes (OBCs) group dominate everyday politics.

The Madhesi identity was a product of political campaigns and popular uprisings. With the resurgence of electoral politics, caste calculations have once again come to the fore. After all, people vote their caste rather than cast their votes in South Asia. Absence of ideology makes that proclivity even stronger.

Development is a catchy word, but it lacks the unifying power of a Madhesbad. Bigwigs of the ruling party repeat stale slogans of 1980s when turncoats of NC used to justify their actions by alluding to the promises of progress that their association with Panchayat could bring about. For the ambitious individuals of the so-called Forward Castes (Kayasthas, Brahmins, Bhumihars and Rajputs) that lack electoral numbers to matter, the Dajyu Syndrome of displaying “ritualized, accommodating, and sycophantic style of behavior” towards the PEON is once again in fashion.

Even influential Madhesis of PEON parties such as the NC and UML have come to accept that there is no escaping the politics of respectability which holds that “the marginalized people must successfully demonstrate their collective social values comport with those of mainstream norms and mores to receive a modicum of equality.” In that sense, it’s 1970s all over again with the government of the State being little more than Anchal Panchayat of yore. The melancholia of Madhesi activists in the town is understandable.

Perhaps it was out of sheer desperation that the self-rule champion CK Raut kicked up a storm over the language of truncated Madhes. Raut probably realizes that electoral politics spells doom for his independence movement. In the manner of an agitated cat clawing at the pillar in sheer frustration, he recently hit out at the Maithili language and Maithil identity. In both cases, he stands on self-defeating grounds.

For any language to have reached the level of Vidyapati’s verses, it takes at least a century of practice and evolution. That makes what Vidyapati characterized as Desil Bayana—the language of the soil—almost a millennium old. While Raut’s allegation that Maithili literature has been the preserve of Kayasthas and Brahmins is largely true, it’s also a fact that the language has easily accepted all variations and survived the double onslaught of state-sponsored Nepali and market-driven Hindi. With or without government support, it will continue to thrive.

In order to keep the dream of unified Madhes alive, however, there is no escaping the three language formula. An entire generation of Madhesis is more comfortable in Nepali than in their own mother tongues. Whether one likes it or not, it will remain the dominant language. Hindi unites Madhes and connects Madhesis with Pahadis in addition to being the favored medium of the marketplace. And by virtue of being the second most spoken language in the country, Maithili will retain its primacy in Central Madhes with full freedom for Magahi, Bajjika, Tharu, Urdu or Bhojpuri speakers to adopt their languages at the local government levels.

There is no need to be tongue-tied in accepting defeat for now. Madhesh has lost another round to the PEON, but struggle for dignity, equality, autonomy and identity is invariably a long one. The rusted leadership will have to make way for activists of a better mettle.

DHANUSHA, Nov 19: The railway equipments and accessories are gradually gathering dust and rusting as the railway was called closure... Read More...

USD 800 stolen from student's luggage at TIA
31 minutes ago