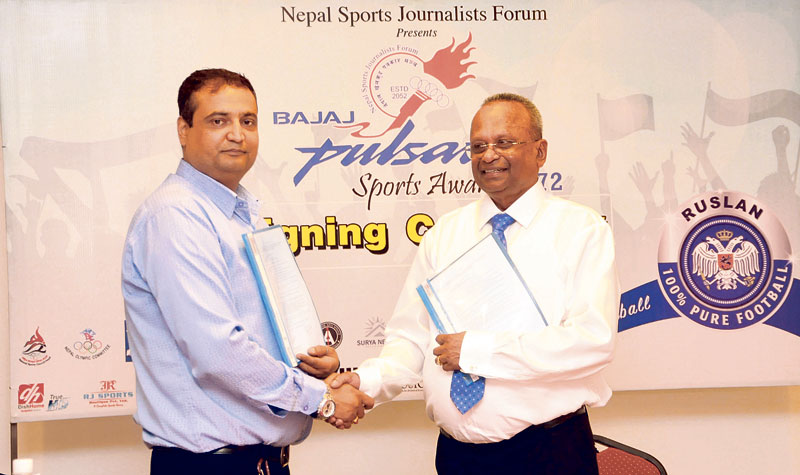 KATHMANDU, July 18: As part of its corporate social responsibility, Ruslan 100 Percent Pure Football has paired with Pulsar Sports Award as co-sponsor for the annual event to be held in the capital on Thursday.

Nepal Sports Journalist Forum (NSJF), the organizer of the Sports Award, and Jawalakhel Group of Industries (JGI), the promoter of Ruslan Football, signed the MoU to this effect on Sunday in the capital. NSJF President Mahesh Acharya and JGI Founder Chairman Bijay Kumar Shah signed the understanding on behalf of their respective institutions. As per the deal, JGI will provide Rs 400,000 annually for three years to conduct the award function.

“Sportspersons are ideal people to support,” JGI Chairman Shah said, adding, “A vast number of youths are involved in sports and as a Nepali company we think it is part of our corporate social responsibility to support sports awards. I am hopeful that we can continue this partnership well into the future.”

Recalling the initial periods of the sports award, NSJF President Acharya said, “We started the award in 2060 (BS) with a budget of Rs 25,000, which was collected from members themselves. We rewarded players in two categories then. But now our budget has reached more than Rs 3 million. Support from corporate houses have been helpful in honoring players. The partnership with Ruslan Football will motivate us to make the award even better.”

According to Sushil Shrestha, chief branding officer of Ruslan, they have been sponsoring football, cricket and basketball--the popular games in the country--after conducting a research few years back. “Our investment in sports sector is purely motivated by our sense of social responsibility than business promotion,” he said.

The annual award function to be held on Thursday will honor sportsperson in eight different categories. NSJF has already announced five nominees for each of the five categories--player of the year male and female, youth player and coach of the year and peoples' choice award.

Similarly, there won't be nominations for remaining three categories--life time achievement, special award and para athlete award. The winners of male, female and people's choice award will be awarded a Pulsar motorbike and the winners of the remaining categories will be handed a purse of Rs 50,000 each.