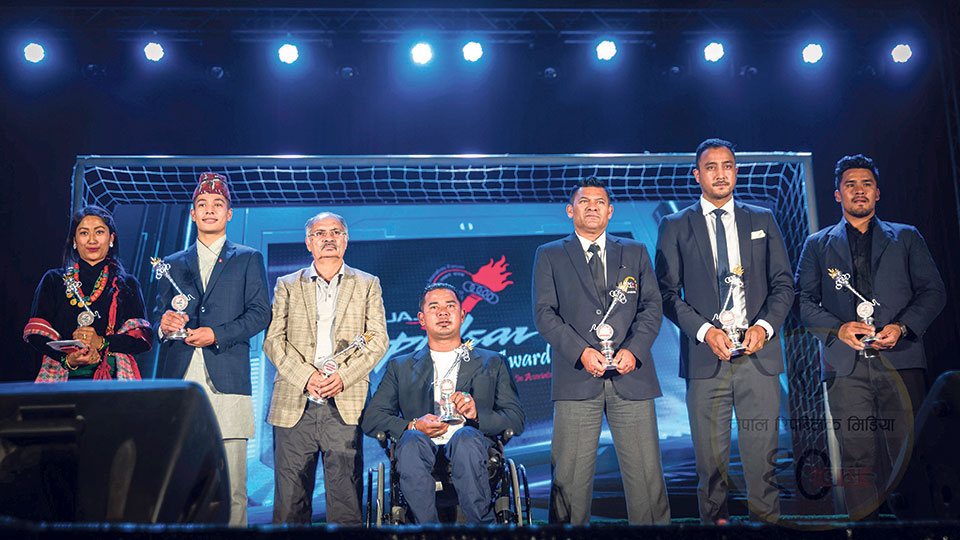 Gauchan was grateful to her mother who supported her in the hard times and let her travel foreign countries to take part in different tournaments. “I want to thank my mom at first because she always supported me in every circumstance and let me travel to foreign countries. I am thankful to my opponents also who challenged me to push harder for more along with all my friends, family and well-wishers,’’ Gauchan added.

Khadka appeared pleasantly surprised to win the award ahead of his young teammate Lamichhane. “This award comes as a surprise to me because I thought Sandeep would win it as he has been wonderful this year with his performances,’’ Khadka further added, “I am thankful to NSJF for organizing this event for creating such platform to honor sports and sportsperson. I hope cricket can reach bigger heights.’’

The 15th edition of the NSJF Pulsar Award organized to honor the sports personalities on the basis of their performance and contributions at national and international arena for Nepal in the year of 2074 BS (2017/18 AD), saw national cricket team head coach Jagat Tamatta and teenage cricketer Lamichhane win the Coach of the Year and the Young Player of the Year awards respectively.

After receiving the award, Tamatta expressed that the award did not come just from his hard work, but from the overall dedication of the whole cricket team. “I have been nominated five times in this category and have won twice. This award came from the hard work of the whole cricket team, not just mine and I am thankful for that,’’ Tamatta further added, “To win the award in front of my daughter is a great feeling and I am delighted to get this award.’’

Meanwhile, Lamichhane is currently involved with his Indian Premier League (IPL) team Delhi Daredevils . The U-19 head coach Binod Das, who was one of the nominees for the Coach of the Year award, accepted the award on his behalf.

Likewise, table tennis player Santoo Shrestha won the People’s Choice Award which was declared on the basis of the SMS votes and Facebook likes.

Table tennis player Shrestha said he was feeling like a dream as he received the award. “It’s a great feeling to win the award and it feels like a dream. I want to thank my friends and family for continuously supporting me and without their support, I would not have been here,’’ Shrestha added.

Meanwhile, former footballer and the trainer at the All Nepal Football Association (ANFA) Academy Ashok KC was recognized with the Lifetime Achievement Award, while wheelchair basketball and cricket player Himal Aryal was awarded with the Para-Athlete Award. Cricketer Karan KC was honored with the Special Award for his stellar performance of 42 runs off 31 balls including four sixes and three boundaries against Canada in the ICC World Cricket League Division Two back in February.