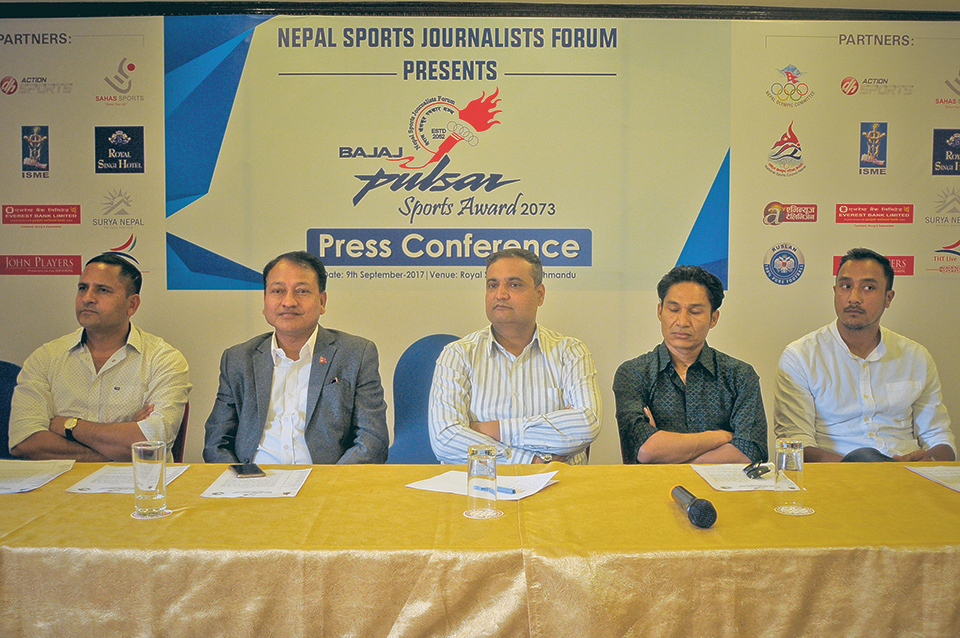 KATHMANDU, Sept 10: Nepal Sports Journalists Forum (NSJF) has completed all the preparations for the 14th NSJF Pulsar Sports Award to be announced on Monday in Kathmandu.

NSJF is honoring the sports personalities in eight categories on the basis of their performance and contributions at national and international arena for Nepal in the year of 2073 BS amidst a special ceremony to be held in Nepal Academy Hall.

Speaking in a press conference various sports personalities applauded for giving continuity to the event saying that such awards would motivate individuals involved in the sports sector.

“This award is not biggest in Nepali sports but has historic importance as it has been inspiring our players for many years,” said Keshav Kumar Bista, member secretary of National Sports Council (NSC).

He also said that instead of organizing different awards, government has to increase its support to make it Pulsar Sports Award bigger. “We have not been able to support this award in the better way, hopefully we can increase the fund for this in future,” added Bista.

Criticizing the government for failing in giving due recognition to players for their contributions, national cricket team skipper Paras Khadka hailed NSJF for filling the void despite various challenges for the Forum in managing the event. “Since the players aren’t getting proper recognition from the government, this award holds great importance for players and other sports personalities,” said Khadka.

President of Nepal National and International Player Association (NNIPA) Dipak Shrestha believed that players waited this award eagerly. “Given the significance of this award, all players wait this special event eagerly. For us it is a great festival,” said former Karate player Shrestha.

Take ownership
NSJF President Mahesh Acharya requested the government to take the ownership of the award saying that the NSJF may find itself in problem even in giving continuity to the award in the same spirit in future given the increasing expenses and limited resources available with the organization.

“We need a huge sum of money to organize this award every year and it also could be hard to get sponsors for every edition,” said Acharya. “So we request the government to take the ownership of this important event and provide total fund for the award totally so as to guarantee its future.”

Asian Sports Press Union (AIPS-Asia)’s Treasurer Niranjan Rajbanshi who is also the former President of NSJF, said that the financial aspects has made the task of organizing the event quite challenging each year. “So far, we have somehow been able to host this event due to support of various organizations from different sectors but the future of the event is becoming uncertain due to expenses consistently increasing every year.”

KATHMANDU, May 11: Dish Media Network Ltd has joined hands with Pulsar Sports Awards to be the association partner. An agreement... Read More...