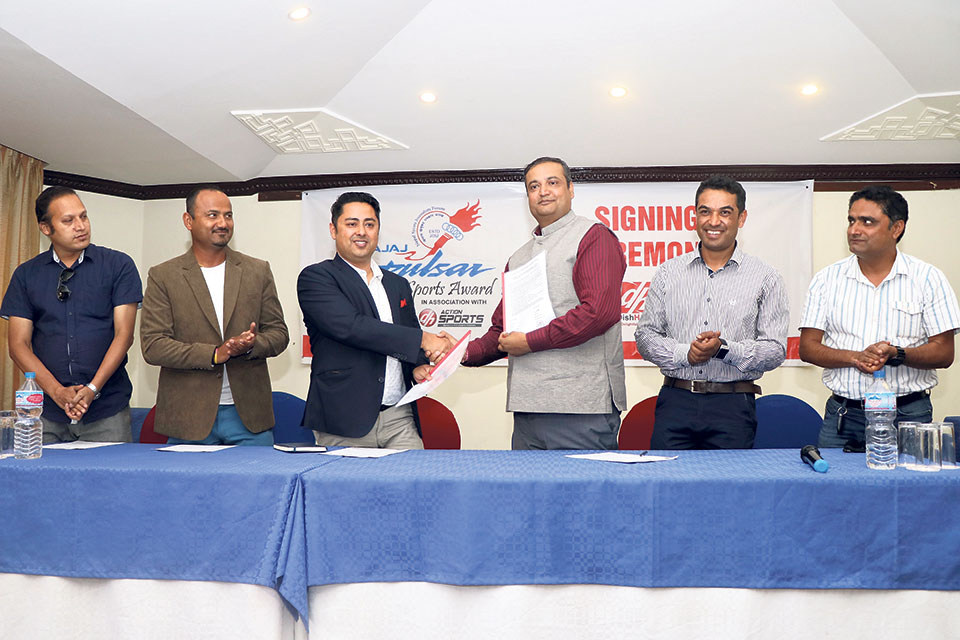 KATHMANDU, May 11: Dish Media Network Ltd has joined hands with Pulsar Sports Awards to be the association partner. An agreement to this effect was made amid a ceremony in Kathmandu on Thursday.

The annual award show hosted by Nepal Sports Journalist Forum (NSJF) is scheduled to be held on May 17. The sports award will now be known as NSJF Pulsar Sports Award 2018 in association with Dish Home Action Sports. The main sponsor of the award is Hansraj Hulaschand and Co Pvt Ltd.

Dish Media’s Chief Executive Officer Sudip Acharya and NSJF’s President Mahesh Acharya signed the contract paper, according to which, Dish Media will provide the sponsorship amount of Rs 700,000 including the cash amount of Rs 470,000 and set-up boxes as well as recharge cards equivalent to Rs 230,000.

Dish Media’s Acharya was happy to be part of the prestigious award show that acknowledges and felicitates both sports and sportsperson on yearly basis.

“Sports bring together the whole country. We are happy to be part of this prestigious show,” he said.

Forum President Acharya appreciated the help received from private firms and thanked for the support. He also expressed hope that the movement will continue in the coming days as well.
“This award actually belongs to the entire sports fraternity. We are mere organizers of the show. All the involved firms are the true organizers of this award,” said Acharya.

The forum is organizing the NSJF Pulsar Sports Award at the Tribhuvan Army Officers’ Club on May 18.

As per the agreement, Hansraj Hulaschand will provide the NSJF with one million rupees in cash and four Bajaj Pulsar motorbikes.

12 people, including four foreigners, trapped in Tumling of Namkha
6 minutes ago