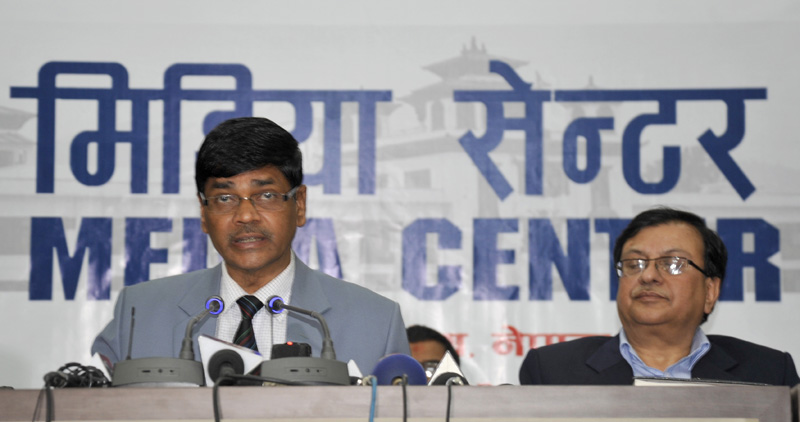 There is little difference among news channels in story selection and display. They differ only in explanation of their decisions
This article could have been about my recent trek in the Khumbu region. I had never before attained such an altitude. It meant something special to me.

But topicality is a key part of writing a column, or doing any other news work. How would I possibly illuminate a media issue in a piece of travelogue, unless I exerted myself to find a media hook?

The more I reflected on this, I more I could see the burden of media routines weigh on me; that why we report or write in journalism is not always because we make a voluntary choice to do so. It has to do with more than just personal intent. The decision is also often determined by certain story structures or processes.

That is the reason that reporters often dismiss criticism of bias, inaccuracies or incompleteness on grounds of limitations in sourcing, deadlines or the continuous nature of news cycles. They lament that critics often ignore the inherent processes of how journalism is done, thus the gap between theory and practice.

To media critics and general consumers, media routines are less obvious, and hence their focus on principles or ideological leaning of journalists. Routines are inherently complex and in our context, we hardly discuss them.

A combination of these factors, but chiefly format and event peg, led me, for now, to abandon my wish to write something in the context of my trek.

Routines are to blame for many issues over media content. Shoemaker and Stephen Reese write that routines have an important impact on the production of symbolic content.

They affect the social reality portrayed by the media. Since journalists have minimal contact with the audience, the latter’s wants and tastes are determined by their subjective judgment. Journalists, by conforming to the news values, make consistent story selections. Objectivity enables them to defend themselves more than serve the public fairly and truthfully. It also leads them to omit information, or to other abuses of the media. Story structures help attracts readership but they can also distort stories. And occupational and organizational considerations far outweigh any constraints imposed by audience needs and interests.

There is little difference among news channels in story selection and display; they differ only in explanations of their decisions, and it justifies the routine organizational constraints on the gatekeepers themselves. Gatekeeping helps media organizations cope with physical constraints like limited space and deadline. Routines help to define what is news and what is not, and their influence on content is sometimes bizarre: beat routine, for instance, requires of a reporter to report something even if nothing is happening. A columnist is no exception. And the routine of inter-media reliance has made news so similar across media.

Source-dictated constraints are identified as the most powerful routine influences on the content. While press conferences, briefings and press releases have reduced the ability of reporters to get scoops and inside stories, powerful news sources lead journalists to adapt to their own bureaucratic structures. The routine practice of quoting a select group of experts has secured homogeneity, uniformity and consistency of ideas and forms in the content of the mainstream media.

If we narrow down, story selection by online outlets and broadcast media in Nepal, for example, is overwhelmingly related to the so-called big media routines rather than the news values of editors. No wonder that most such content is verbatim copied and recycled from mainstream newspapers. Though the subjectivity of journalists may at times get a free play in the selection process, they often base their selection on the stories in mainstream newspapers.

Sociologist Michael Schudson digs beyond the typically defined deadline routines and shows that dimensions of time have a far greater influence on content than usually thought of. Journalists use present tense to emphasize scoop, past tense to offer context and background, and future (and often subjunctive or semiotic) tense to highlight trends and analyses. Media’s emphasis on immediacy and timeliness of news has made journalists subject to manipulation by public officials. He argues that journalists will continue to be thus manipulated so long as they keep playing the game of immediacy (largely determined by those officials).

Media content is subject to rhythm of time (with a sense of ending and/or binary possibilities) and to cultural calendar (weekend supplements, anniversary or special festival editions). Prominent examples in Nepal include exhibitions and trade fair pull-outs, or annual Higher Secondary educational specials or rankings, as is the case now.

Routines also limit the concept of timeliness. The rare and unconscious use of subjunctive, which provides room for journalists’ prediction or supposition, lets the reporter’s opinion enter a story. The use of semiotic tense to cover diplomatic issues also reveals that media are instruments of the government. Unfortunately, journalists have not been able to take advantage of the rich possibilities in different tenses. Their over-emphasis on the instant and the immediate does not allow broader context and perspectives in a story. In other words, deadline race has helped produce malnourished news stories and led to a decline in the quality of journalism.

Besides, organizational and technological factors also encroach on news content. Media organizations exert control over their members in the production of content through their internal policies, which are largely unwritten but understood by the news workers over time. Understanding those rules is part of the news routine.

Although technological advances have broken down geographical barriers giving way to stories from formerly underreported places, overreliance on technology (recycling from the same source) is killing content diversity. Technological routines are ever changing and news has become continuous, with unceasing deadlines. Journalists are having to adjust to the instantaneous nature of satellite transmission, or to the visual, virtual and make-believe effects of new media. They are also having to learn to make the shift from articles to charticles or graphicles.

Media routines help journalists with professional tools to fight deadlines and newsroom pressures but they also handcuff them in what/how they write or force them to miss/omit writing.

I will have to bend the rules of media routines in some way next time to write that piece on my Khumbu trek. Will I be able to see topicality or time-constraint in new light? Perhaps I can highlight issues of connectivity or technology vis-à-vis nature!

Problems galore in export of medicinal herbs to India

NEPALGUNJ, July 29: Exporters of medicinal herbs in Nepalgunj are facing problem because of 'impractical' rules imposed by the government agencies... Read More...

KATHMANDU, Oct 16: Modeling does not incorporate only posing for camera or ramp walk anymore, but it has emerged as a... Read More...

Vote count postponed in Butwal : Who broke the ballot box seal and why?
26 minutes ago