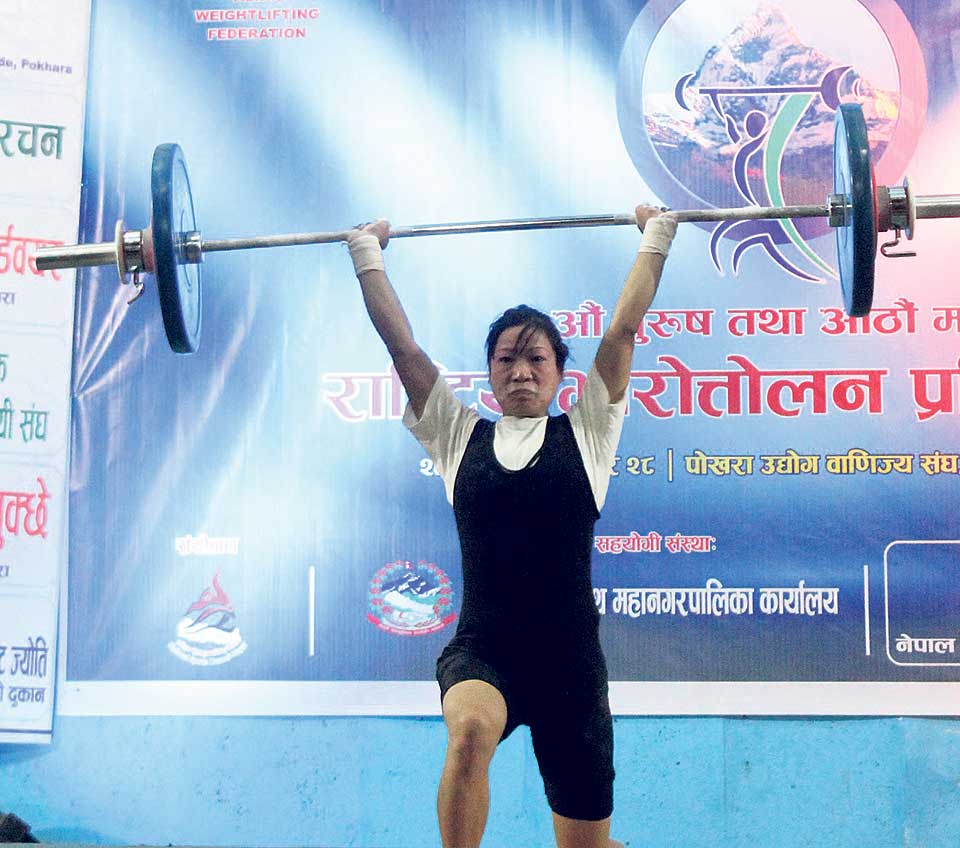 Sanju Chaudhary improved her own record in 53 kg category to win the gold. She notched 63 kg in snatch, 2 kg more than her record set at the Asian Club and Asia Cup at Korea in 2017. She also improved her record by a kg in clean and jerk lifting 82 kg. She broke her previous record made at Sunil Lal Joshi Memorial Cup 2017. Her combined tally of 145 kg also made new record breaking her previous record made in Korea earning a gold medal. NPC’s Devi Kumari Chaudhary finished second with combined weight of 137 kg (clean and jerk: 75, snatch: 62) whereas Saptari’s Kajal Yadav became third with 95 kg (clean and jerk: 50, snatch: 45).

Similarly, in 58 kg category for women, TAC’s Kamala Shrestha won gold by lifting the combined weight of 151 kg. She made a new national record in clean and jerk with 86 kg breaking her previous record of 85 made in Asian Youth and Junior Championship at Lalitpur. She lifted 65 kg in snatch.

A total 75 players including 51 men and 24 women participated in the event.

Semifinal lineup for Kabaddi completed
The semifinal lineup of both men’s and women’s teams in the 22nd Men’s and 17th Women’s National Kabaddi Tournament has been completed on Wednesday.

Likewise, in the women’s category, TAC will vie against Nepal Police Club (NPC) and Far-western Region will play against Central Region in the matches which will be held in Bardiya.

The semifinal and final matches will be played on Thursday.