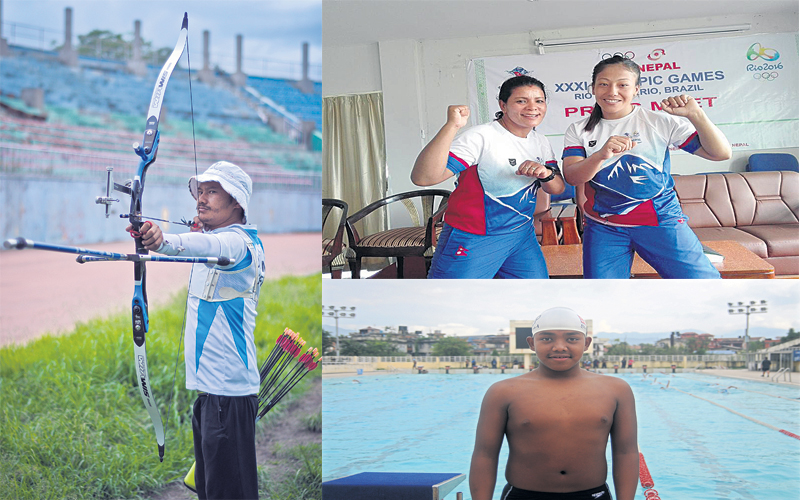 KATHMANDU, Aug 3: Athletes Hari Prasad Rimal and Saraswati Bhattarai, representing Nepal in the Rio Olympics beginning from Friday, have expressed satisfaction with their training and have set sight on breaking national records at the global sports meet.

Similar to all other athletes representing Nepal in the Olympics, Hari will be targeting to beat the 12-year old national record of fellow Army man Rajendra Bhandari. The latter holds the record of 14 minutes and 4 seconds set during the 2004 Athens Olympics.

“My main objective is to better the current national record. I want to give my best and set new record,” said the 27-year old who hails from Dhading.

Hari booked his ticket for the Rio Olympics by virtue of winning bronze in the in 12th South Asian Games (SAG) held in February in India. In course of becoming the lone athlete of the country to win athletics medal in SAG, Hari completed 5000 meters in 14 minutes and 32 seconds.

Expressing his happiness over the preparation, he said, “Preparation has gone well, we have been training 5 to 6 hours per day focusing Olympics from mid-May.” Hari, however, said that he would have loved to go abroad for training. “Foreign training would have boosted our confidence level.

That would have helped us gain more experience before leaving for Rio.”

Rajkumari Pandey holds the national record of 4 minutes and 34 seconds in women's 1500 race.

As none of the women athletes claimed medals in the 12th SAG, Nepal Athletics Association (NAA) conducted a selection tournament where Saraswati topped the qualifier to earn the ticket for Rio Olympics.

She was delighted with the training under coach Ojha and shared, “I am satisfied with how the preparation has gone so far. We have trained hard. And I have felt that I have improved from this training.”

Four Nepali athletes, including Saraswati, had trained in Bangkok for 45 days before taking part in Thailand Open Athletics Championship in August 2015. In the same tournament, she claimed a bronze medal in 1500 meters race.

Saraswati shared that the training is Bangkok had instilled a lot of confidence on her. “We had so less time to go abroad for training as our selection was conducted lately,” she said, “We did not have long time to undergo specific preparation for Rio,” Saraswati said after her entry to Rio was confirmed on May 8. “We wouldn't have problem to acclimatize had we been training abroad.”

Similarly, coach Pushpa Raj Ojha agreed with his players over the preparation. “I am pleased with the preparation. Players have worked hard and they are focused on our primary target of breaking national records.”

According to Ojha, the players were given special raincoat to resist the disturbance brought by rains during the training.

Worldwide screening of '14 Peaks, Nothing Is Impossible' based on Nirmal Purja's biography
24 minutes ago