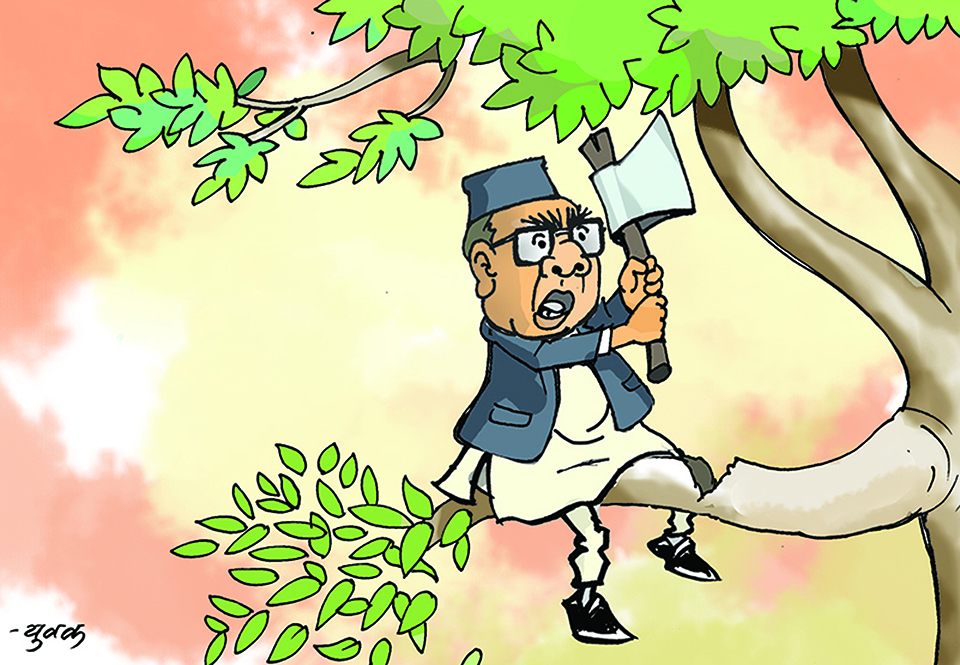 Had Nepali Congress honored its ideological principles, the party would not have plunged so low as it now finds itself in

Nepali Congress unity begins to crumble whenever it sits in power and leaders indulge in narrow personal interests, as demonstrated time and again since the early days of democracy back in 1951. In the aftermath of the 2017 local, provincial and general elections, Nepali Congress braces for an organizational crisis which, if not addressed with speed and diligence, could permanently reduce it to a fringe party.

CPN-UML’s Madhav Kumar Nepal lost the 2008 elections,but was made Constituent Assembly member through the back door and went on to become the prime minister. It paired him with another defeated politician Sujata Koirala of NC, who, at her father Girija Prasad Koirala’s insistence, was catapulted to deputy premier looking after foreign affairs in 2009. Daughter Koirala became the second Nepali woman to be elevated to deputy premiership, the first being her more deserving cousin Shailaja Acharya. NC’s supposedly dynamic youth leaders kept quiet all along.

The very charges Sher Bahadur Deuba and his group labeled against Girija Prasad Koirala in the 1990s are now rebounding at him. The election debacle enabled his peers to go full blast at him. Encouraged, the second-rank leaders have also joined the chorus.

NC’s defeat in 2017 was not its first. It was relegated to the main opposition in 1994 and 2008. But the 2017 defeat proved to be the worst ever, with a warning that the slide could continue becoming steeper. Were the dismal performance to get repeated in the next elections, the process of NC’s marginalization would be sealed while some other forces will start emerging to fill the vacuum, inviting the formation of new power equations.

Underestimating opponents in public could be an expedient tactic but actually believing in the same would be politically fatal. It only gives NC a false sense of strength. Had NC honored its ideological principles, it would not have plunged so low as it now finds itself in. Some groups within NC are toying the idea of realignment with “like-minded” parties, including various manifestations of Rastriya Prajatantra Party. A well-thought out alliance early on could give a psychological uplift and morale boost to the party rank and file.

NC could create a credible image to the voting public and the discerning eyes of the elite by being seen as the main opposition that has a working relationship and loose coordination with other opposition groups that cannot be dismissed.  It should give up hopes of bouncing back to power by default, that is, banking on the unified Nepal Communist Party (NCP) to fall under the weight of its own rhetoric and lack of confidence, as seen in its first five months in office, in delivering the tall pledges it had made to the voting public.

With the unification of CPN-UML and Maoist Center, NCP inherits a combined past—from the Jhapa movement when landlords were beaten black and blue, and some of their necks slit, down to the Maoists’ decade-long insurgency that killed and maimed tens of thousands of people. NC acquiesced in the Maoist insurgency being swept under the carpet in 2005-6, and immersed itself in Maoist agenda. In the process, its initiative got lost and so did the principles of its vaunted leader BP Koirala dating from 1976.

Six communist leaders have become prime ministers eight times. Doublespeak betrayed their character when accepting with “critical support” the 1990 Constitution, and staking a claim to form government in 2002 when NC leader Sher Bahadur Deuba was dismissed for seeking to defer the general elections for which he had dissolved parliament. King Gyanendra called for petitions from candidates to fill the vacant post. Double standards are also demonstrated in retaining the communist tag and yet claiming to vouch for multiparty polity while eagerly carrying the capitalist agenda of the US-dominated and Western-steered World Bank.

NC abandoned BP Koirala’s two pillars of democracy—multiparty polity and constitutional monarchy. As the main opposition for the next five years—a record—the course NC pursues will be watched closely.

When Ganesh Man Singh in 1991 claimed that NC would win hands down even if it were to field a stick [staff] as a candidate, his wife and son both lost in a race against the propaganda tide unleashed by Madan Bhandari and his communist tribe.

The arrogance of two-thirds majority has alienated Nepal Communist Party (NCP) from large sections of the elite and media. This has unflattering parallel in history. A glance at newspapers of the day shows the level of arrogance exhibited by the elected NC government in 1959-60. NCP no longer possesses the character of a communist organization. NC’s harping on the theme that communists are inherently authoritarian does not convince voters. Nepalis have made this clear time and again giving an impressive percentage of votes for a creditable parliamentary presence of the communists. Moreover, NC in the past shared power and regularly joined communist-led governments. Hence its arguments would lose much of their teeth when reviling Prime Minister KP Oli and his comrades.

Intolerance has implications. When salted with ignorance and peppered with arrogance, it risks becoming incurably debilitating. To regain its lost ground and emerge as an effective force to reckon with, NC must end faction-fighting. Of no use is denying the existence of faction-feud or insisting, as did youth leader Gagan Thapa, “Which party does not have factions? All have. It is but natural.” In any case, no one’s infallible, including Thapa, who is projected by his admirers as a future prime ministerial material.

New alignments and a clear-cut stand to withstand the test of times should enable NC to retrieve its previous position well within the next four and a half years. Its significant past and public perception of its potential to yet resurrect should put the organization in good stead.

NC must find common points of agreement with other parties, and not rule out inviting some of them for a merger. An honest review of its policies is the first step. Following it up with necessary corrective measures and new and imaginative initiatives should steer the oldest existing party toward at least a neck-and-neck race with NCP in the next big battle of the ballot. This means sinking personal interests among own party members, dubious dealings when distributing organizational posts and electoral tickets, and appreciating the positive features of other “loktantrik” forces.

Nepali Congress should refrain from defining itself—rather than practicing—as the template of democracy. First, no organization in the world can legitimately claim itself as such; second, its rubbing of shoulders with virtually every political stripe and color effectively denies it the exceptional honor. Reappraisal of its past two decades should guide it to credible ideological footing.

NC’s rise in the 1950s, decline in the late 1990s and ideological drifting toward an utterly disastrous course in the new millennium deny it the reputation of an organization committed to principled politics and corruption-free culture. Inheritors of past glory do not automatically possess the political primacy to power in the present times. Change in leadership and infusion of younger blood appreciated by the public make for effective results.

KATHMANDU, Sept 5: Nine more individuals succumbed to the novel coronavirus diseases (COVID-19) in the last 24 hours, according to... Read More...

KATHMANDU, May 22: As many as 21 COVID-19 patients including the first case reported in Nepalgunj, Banke, have been discharged... Read More...