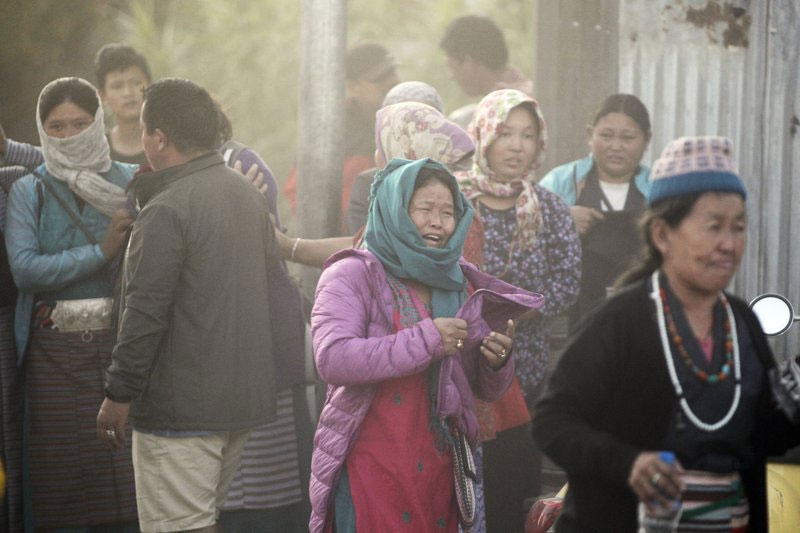 KATHMANDU, Nepal, Oct 15:  It took rescuers two days to recover the battered bodies of nine climbers, including one of the world’s best, who died in Nepal’s worst mountaineering disaster in recent years, authorities said Monday.

Local police chief Bir Bahadur Budamagar said a group of villagers reached the climbers’ camp site on Saturday on Gurja Himal, a less-popular but pristine mountain in the shadow of Dhaulagiri, the world’s seventh-highest peak and a day’s walk from the nearest village.

The climbers included Kim Chang-ho, the first South Korean to summit all 14 Himalayan peaks over 8,000 meters without using supplemental oxygen, who was leading the expedition with four other South Koreans and four Nepalese guides.

Technically difficult and remote, the mountain hasn’t been scaled in eight years. The damage to the climbers’ bodies, including broken limbs and smashed skulls, indicated a violent wind carrying chunks of ice swept them away from their camp site, Budamagar said. The bodies were found spread in a 1.5 kilometer (1 mile) radius.

“The battered pieces and tents and other equipment were scattered even further away,” Budamagar said.

Only 30 climbers have ever reached the peak of the 7,193-meter (23,590-foot) Gurja Himal, government tourism director Surendra Thapa said, and Kim was not among them.

Nepal offers hundreds of mountains to climb, and mountaineers generally choose those where the routes and conditions are well known.

Many climbers are discouraged from the mountain at least in part because of a legal requirement to have at least three trained Nepalese guides along to receive a permit, Thapa said.

More adventurous climbers would be drawn to a mountain like Gurja, said Jiban Ghimire, who organizes expeditions for the Kathmandu-based company Shangrila Nepal Trek.

“These people like to go to mountains which are not crowded and there are no commercially organized expeditions of big groups. On the bad side, they are also far from getting help when in trouble,” Ghimire said.

The bodies of Kim and four other South Koreans who were killed will arrive in South Korea on Wednesday, according to an official from South Korea’s Corean Alpine Club.

Rescuers retrieved the climbers’ bodies on Sunday after the weather cleared. The body of one of the guides was taken to his village, while the eight others were flown to Kathmandu.

“It was the worst mountaineering disaster in Nepal in recent years and an unimaginable one,” said Rameshwor Niraula of Nepal’s Mountaineering Department, which issues climbing permits and monitors expeditions.

Niraula said officials were still gathering details of what exactly happened, but from what rescuers described, the climbers were blown over by the blast of the blizzard-like wind conditions.

Word of the destruction got out Saturday morning, and helicopters were sent. They were not able to land due to the continuing bad weather but spotted the bodies.

Spring and autumn are the optimal climbing seasons in Nepal between the harsh winter and summer monsoon.

One Korean member of the climbing team had become ill and was in a village far below the base camp during the storm.

The Corean Alpine Club official, who didn’t want to be identified because she wasn’t authorized to speak to reporters, identified the other South Korean victims as Yu Yeong-jik, Im Il-jin, Jeong Jun-mo and Lee Jae-hoon.

Yu was reportedly in charge of equipment for the team. Im was a filmmaker who specialized in documentaries of mountain climbers. South Korea’s Yonhap news agency said senior CAC member Jeong wasn’t part of Kim’s team but was visiting them when the accident happened.

It was the deadliest climbing disaster in Nepal since 2015, when 19 people were killed at Mount Everest base camp by an avalanche triggered by an earthquake that devastated the country. The previous year, an avalanche above Everest’s base camp killed 16 Nepalese Sherpa guides.

The Himalayan range includes all 14 of the world’s peaks that rise above 8,000 meters, and only a few dozen climbers have made verified, successful ascents of them all. Kim achieved his feat in 2013.

KATHMANDU, June 28: The Ministry of Health and Population (MoHP) reported recovery of 179 patients of Covid-19 in last 24... Read More...

Bodies of 9 climbers retrieved from Gurja

MYAGDI, Oct 15: The dead bodies of nine climbers including five South Koreans and four Nepalis who went missing after a... Read More...