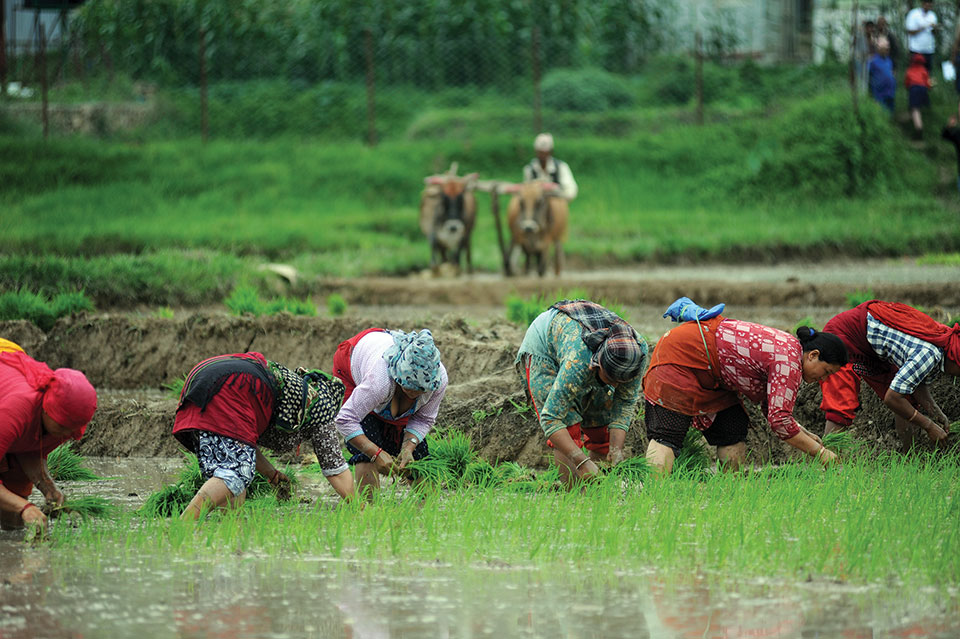 Development is best gauged in term of success and smiles of farmers, who cultivate rough and rocky terrains while navigating treacherous trails day in and day out

Summer is the harbinger of monsoon rains with an abundance of splash of water and mud in the fields. The plough and spade artists carve a beautiful landscape mixing love, sweat and faith in the terraced rice fields. They work from dawn to dusk to embellish the earth around them. Still, their greatness largely goes unnoticed and unappreciated.

They love the glowworms and loathe a clear sky (including the moon and stars) at night fearing an ominous paddy crop failure due to short fall of rains. The chemistry between spade-artists breaking up lumps in soil to form ridges or barrier for the water and plowmen and oxen is asymmetrical and fun to watch in the muddy terraces of productivity and fertility. Yoked oxen obediently move/dance to the tune of whistle and occasional verbal insinuations of plowmen.

The young and beautiful ‘ropar’ (paddy planters) swiftly planting the baby paddy in the prepared field look like artists busy painting their masterpieces. The ones sporting the most smudges are perhaps the best artists as perfection demands complete consummation which only the gifted ones can practice. Total immersion is an extraordinary trait found only among few accomplished artists.

Crickets stridulate by bushes adjoining the fields. Mynahs meekly sprint and black drongos glide performing aerial sallies to catch their prey. Bees and bumble bees surround and suck on sweet cornstalks still standing in the fields. The fog rushes through the cornfield (as if it is pursued by the clouds)blanketing the surroundings momentarily and offering rare opportunities to recalcitrant lovers to express their love to each other without being pried into and being the fodder of  rural rumor mills.

People either harvest corn or collect silos of string/ green beans or clear cornstalks to prepare field for paddy planting in the summer. It’s time when everybody carries loads home. The same applies to winter when loads of rice, hay, soybeans, and lentils of various kinds head home. Isn’t it interesting to see fields so demanding during the spring/ fall turn so generous during winter/ summer?

The only rest possible during the paddy planting period is the hiatus of brunch, which would mostly be a plateful of rice with limited pumpkin or dried mustard leaf soup when I used to be a member of field cultivating squad in the family. Grilled and/or boiled fresh corn would offer a welcome break from the monotony of rice every now and then. And yes, rice bread (selroti) used to be the special guests on every Asar 15, the day of ‘ropain’ (baby paddy planting) festival.

The brunch varies across regions and communities that could include flattened rice with yogurt, popped corn and soybean with buttermilk, and sweet rice/rice and vegetable/lentil soup based on availability, prevalent practices and workers’ preferences. Sadly, most of those fields remain uncultivated these days thanks to the great revolution of our comrades who once reigned supreme in the villages and mofussil by creating terror and causing massive outmigration to the cities and towns. They have now cemented their grips in power by successfully stoking emotions of pseudo-nationalism among suburban and urban voters.

I used to collect my share of brunch and climb up the closest rock or boulder in search of the driest place to enjoy view and food together. No sooner had I spilt any particles of rice involuntarily, than the ants competed to collect them. In absence of rocks I would prefer the higher grounds when additional caution was required to prevent the athletic grasshoppers from jumping into my food as they are unpredictable and nasty with their fore/hind legs, abdomen, and claws, which may carry thousands of harmful germs.

Difficult job
Ropain is a lengthy process that stretches longer than a month in most hilly regions unlike in Tarai and inner Tarai, where one family a day planting tradition is prevalent because of access to modern agricultural tools and relatively scientific land distribution. Most of the farmers in the hills own plots of land that are awfully dispersed away from each other for one-day planting event to be practicable

Food aside, warmth in the watery and muddy field is scarce. On a rainy day, freshly defecated oxen dung is the best source of warm object available for the workers wrapped in ‘ghum’ (covering made of interlaced bamboo strips and leaves carried as protection from rain). Comfort comes from the most unlikely objects which we often ignore and overlook .Oh yes, those dung keep coming in abundance as the oxen are fed generously during the paddy planting period.

Keeping the oxen full, sturdy and active at all the time is prerequisite to a timely completion of the planting work. Otherwise, one could end up being ‘maijare’ (last finisher) which is a derogatory term equivalent to sloth. In that case, all the villagers come to help finish things up but end up messing things up in ways that unwittingly reduce chances of good yields. Hence, being ‘maijare’ is the last thing people want.

However, ‘maijaro’ (completion) denotes much needed relief and restitution. The completion of a lengthy paddy planting process is marked with preparation of delicacies including a treat of bamboo shoot dish among other varieties. From shoots to fully grown ones, bamboos play a significant role in the lives of rural farmers as the source of raingear (ghum), baskets, animal leashes, shade cover and what not.

Farmers rely on bamboo for various daily supplies but they get bamboozled by the political leaders. Anybody disagreeing with this statement must wait until Asar 15 (day of ropain festival) when the agriculture minister and leaders of various stripes descend into farmers’ fields to play with mud (and farmers sentiments, of course) while their security details and cronies live stream the event on social media and the national news media cover it during their prime time newscasts. They are devoid of any values although they may have some news value.

Betraying farmers
They promise to introduce some novel schemes to support farmers. They repeat and tout Nepal as an agrarian country and highlight plans and priorities to increase productivity. They make tall claims and promises, which ultimately ring hollow measured against policy formulation and their implementation. This proves yet another annual ritual in a country where rituals take precedence over results.

It seems lost on us that development doesn’t mean the erection of multi-storey buildings with lavish furnishings of leaders and their cronies on the outskirts of metropolises and cities. Development is best gauged in term of success and smiles of farmers, who cultivate rough and rocky terrains while navigating treacherous trails day in and day out.

The federal government of the United States provided $840 million in 2018 and has already announced an additional relief package of $16 billion to farmers who have been affected by the ongoing US-China trade war. Unfortunately, Nepal’s successive governments have failed to curb vicious circle/network of land mafia and agricultural middlemen and enable farmers to have equal say in determining prices of their agricultural produces. Dang on them!

MUGU, Aug 31: Farmers of Mugu are worried for their produce is about to rot as they have not been able... Read More...