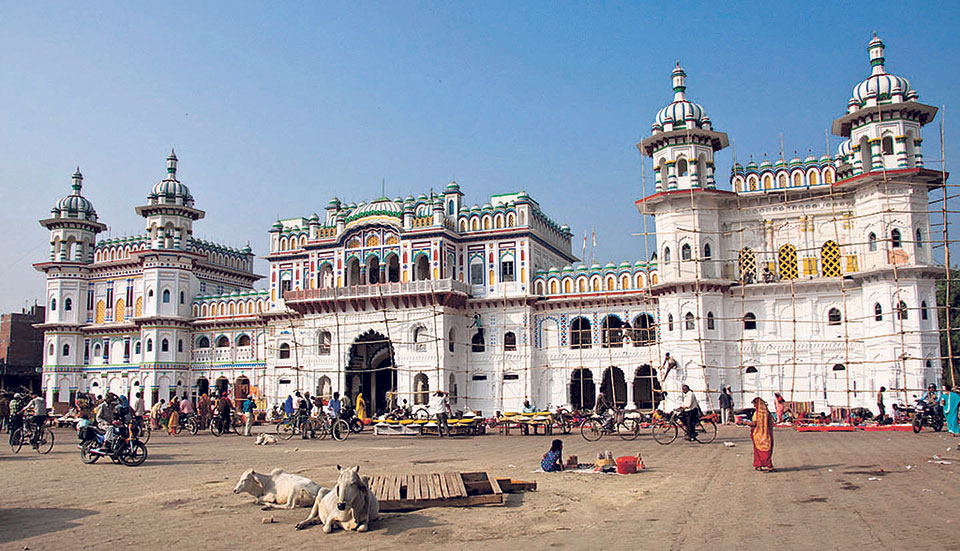 Sports were part and parcel of our tradition. Sita’s marriage with Ram was arranged only when the latter could break Pinak Dhanush

History of sport is as old as the history of humanity. Each society conducts one or other sports activities. In view of its importance, sport is sometimes treated as the barometer to judge quality of life of people. This is one of the reasons why so much of priority is accorded to sports development at the global level.

Yet, not every society gives equal priority to sport. In our history, sport used to be part and parcel of our traditional culture. During the Ramayana period dating back some 10,000 years, Sita’s marriage with Ram was arranged only when the latter could break the Pinak Dhanush (bow) amidst a ceremony in which all important personalities of that period from different corners of the world had gathered. None present in the gathering except Ram could lift the Dhanush and break it to win the hands of Sita, a symbol of ‘trophy’ in sports activities. This event is an example of importance given to Dhanush sport.

As per the Ramayana story, a part of Dhanush broken by Ram fell at a place called ‘Dhanusha,’ lying some 19 kilometers north from Janakpur. Dhanusha district gets its name from this place.
King Janak had promised that he would allow his daughter, Sita, to marry with only such a person who could break the Pinak Dhanush that was too heavy to be lifted. It is said that the king had made such a promise following the incident in which Sita in her childhood had effortlessly lifted the Dhanush while cleaning certain part of the palace in which she lived.

Dhanush is a part of the traditional Hindu way of life. Both during the Ramayana and Mahabharat period, most of the divine personalities always carried with them Dhanush and arrow, which symbolized act of protecting the divinity and punishing the evils.

Building stadium
Against this backdrop, the recent initiative taken by Dinesh Purve, a political activist and engineer now turned into a social worker, to construct Ram-Janaki Multipurpose International Stadium (RJMIS) of world-class standard, in Janakpur, the capital of Mithila in the ancient time and now again capital of Province 2 under the federal system is an epoch-making event.

Born in a very ordinary family at Thera village near Janakpur, Purvey’s dream of making international standard sports centre is now coming true. It was at his untiring effort that his NGO, Shree Ram-Janaki Sports Development Organization (SRJSDO), was able to convince government of Nepal to approve the proposal for the construction of such gigantic structure of RJMIS. Following this development, the National Sports Council (NSC) has taken the responsibility to execute construction work of this project.

In regard to construction of RJMIS, the NSC has already acquired 17 bighas of land of Lakshman Temple from Guthi Sansthan on lease for 30-long years. As per the agreement between the NSC and the Guthi Sansthan, the former will pay to the latter an annual sum of NRs. 900,000.
To be constructed at the cost of NRs. 6 billion within three years, the RJMIS will be the largest stadium in Nepal. Even in India, there are only a few such stadiums. The RJMIS will have three wings—cricket stadium, hockey stadium and football stadium.

Whereas each of the cricket stadium and football stadium will have 65,000 seats, the hockey field will have 25,000 seats.  Besides, there will also be multi-sports indoor covered air-dome with 5,500 seats to promote such sports as wrestling, Kabaddi, etc. Also, there will be provision for athletics track and swimming pool. After the completion of all structures, RJMIS will take shape of Dhanush.

The glorious cultural tradition of Janakpur is likely to be revived once this stadium is constructed. Significantly, the local economy of Janakpur and Province 2 in particular and the economy of Nepal, in general, might also get a major boost from this project. Frequent national and international level sports to be organized at this place will not only facilitate the growth of hotels, transport services and other related industries, but also help the growth of tourism industry in the region. Significantly, it will also provide ample of opportunities to the youth and other interested groups to engage themselves in sports activities and thereby improve their health.

Enriching Nepal-India ties
RJMIS can also work to enrich ages-old cultural ties between Nepal and India. The twin city agreement made between Nepal and India for the development of Janakpur and Ayodhya will get a new lease of life if it could include this project in its fold. It was at the initiative of Indian Prime Minister Narendra Modi that the twin city agreement had been signed in November 2014 when he visited Nepal for the second time.

Unfortunately, the agreement that was so important to enhance Nepal-India relations, could not take off and made to collapse after three years of its period. However, this agreement is likely to be renewed soon considering its potentiality to strengthen the traditional ties between Nepal and India.
At a time the twin city agreement was signed between Nepal and Indian government, there were no major projects for development of Janakpur. But following this development, the ADB-supported project has come into operation. Under this project, road expansion work, apart from the sewerage construction is going on in Janakpur. Additionally, the DPR for the protection, preservation and beautification of 22 important ponds inside the parikrama sadak in Janakpur is also being made. This project could cost an amount ranging from 1.5 to 2.0 billion. Former Minister Mahendra Yadav has taken major initiative to implement this dream project.

Now the RJMIS project could prove a milestone in development of Janakpur. If all goes well as per the plan, the construction work for RJMIS will begin from the next fiscal year after finalization of its Detailed Project Report (DPR). Since the NSC has been made responsible for the construction of RJMIS, all possible support needs to be given to this body to mobilize necessary resources for investment. Also, the government in Province 2 should take extra initiative to ensure that the project is completed within the given timeframe.

Nepali Congress needs to reach out to common people. Policies and programs need to be modified as per the needs... Read More...

Need of the hour is to make our nationalism people-centric and broad-based so that all of us can take its... Read More...