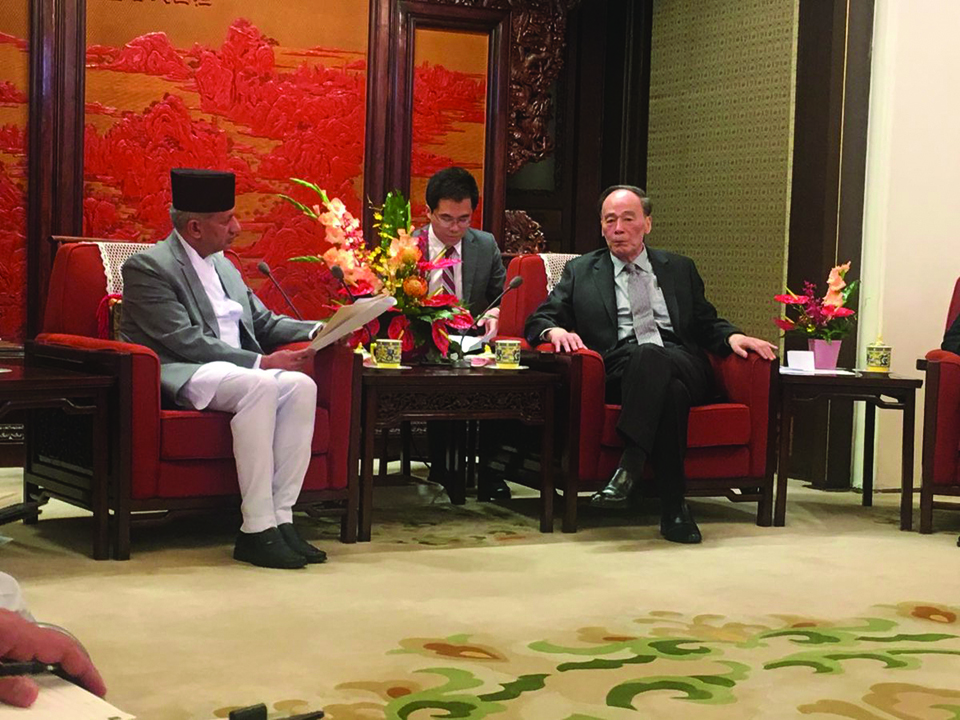 On April 20, after meeting with his Chinese counterpart Wang Yi in Beijing, Nepal’s Minister for Foreign Affairs Pradeep Kumar Gyawali came to Chengdu, southwestern China, to address a program at Sichuan University (SCU). As a graduate student of international relations from SCU, I also had the chance to listen to the speech given Prime Minister K P Oli there in 2016.

A very distinct feeling is that the two leaders shared the same principles and visions. The foreign minister goes even more specific to define China-Nepal relations as a generator of regional prosperity and stability. Taking into account the development of important factors in the past two years, we can confidently look forward to higher expectations for the further development of China-Nepal relations.

A week before Gyawali left for China PM Oli had just concluded a three-day visit to India and returned to Nepal. He had received a warm reception in India and he claimed the visit was ‘historic and largely successful’.

It is notable that Oli did not attend Boao Forum which was held from April 8 to 11 in Hainan, China. The PM himself and former PM Prachanda had both attended the forum of the past two years. Perhaps this should not be over-interpreted but it can be said that neighborhood policy of Left Alliance government Oli is taking a clearer shape: Maintain traditional friendship and special relation with India, and carefully keep an appropriate distance to avoid over-dependence on it by raising the level of relation with China at the same time.

The goal is to establish a balanced and non-aligned foreign policy by which Nepal’s sovereignty and independence can be ensured. It is widely believed that Nepal’s foreign minister has laid a solid foundation for higher level exchanges of visits between the two countries in the near future.

The 13th Chinese People’s Congress held in March this year reelected Xi Jinping as China’s president. This ensures the continuation of the implementation of his concepts of governance, especially his thoughts on BRI. In Nepal, Oli government which assumed power with overwhelming majority in February is widely considered to become a stable one. With political stability Nepal will definitely pursue longer-term domestic and foreign policies.

As Chinese vice-president Wang Qishan pointed out in his meeting with Gyawali Nepal has successfully completed its political transition process and shifted the focus to economic development. In China, socialism with Chinese characteristics has crossed the threshold into a new era. Nepal has ushered in a new development period. In this situation, further development of bilateral relations could open more avenues for the two countries.

Pradeep Gyawali is no stranger to China and Communist Party of China (CPC). Back in April 2016, as the secretary of the Central Committee of CPN (UML), he had led a senior delegation of his party to SCU, in which a national public administration training base is placed, for a seven-day advanced governing experience exchange.

During the time, the delegation members had the opportunity to access knowledge such as Deng Xiaoping’s theory, localization of Marxism, reform and opening up of contemporary China, and traditional Chinese culture. Gyawali himself and his delegates also paid a visit to Deng Xiaoping’s hometown to express their respect.

Gyawali visited SCU again as a foreign minister and recalled his last visit as an opportunity “to learn new knowledge” and thus “greatly benefit” from it. On his first day, he attended the releasing ceremony of Chinese version of PM Oli’s selected speeches translated by South Asian experts from SCU.

As ruling communist parties, CPN-UML and CPC can share with each other many experiences in governing the respective countries.

Apart from ‘party-to-party’ connection, CPN-UML also sees other potentials to broaden the bilateral cooperation with CPC. China is a victim country of frequent natural disasters. It has accumulated precious experiences and skills in disaster response and reconstruction. This year marks the 10th anniversary of the 2008 Great WenChuan earthquake which caused tens of thousands of deaths and casualties. The reconstruction and economic development of the earthquake-stricken area have achieved significant accomplishments.

Many Nepali leaders, including Oli and Gyawali, who are involved in Nepal’s post-disaster reconstruction process, have come to Sichuan to observe the work and expressed their willingness to cooperate in this field. In fact, SCU itself has an institute for disaster management and reconstruction, one of the first and most advanced in the world. It specializes in training disaster prevention and disaster reduction, post-disaster reconstructing and emergency management talents. If research and practical collaboration in these fields can be carried out effectively, it will benefit people of both countries.

Chengdu, as a significant economic and cultural center in western China and the capital city of Sichuan, is a sister city of Kathmandu. It is a major frontier of BRI and also plays an extremely important role in China-Nepal exchanges. Colleges and universities here are hosting a large number of Nepali students.

Two years ago, when PM Oli visited China, he also chose this city as the last stop of his trip. Moreover, the Nepali side had proposed to establish consulate general in Chengdu. With further stabilization of the political situation and the deepening of the process of decentralization, Nepal’s economic and social growth will surely accelerate.  Such growth can be realized if both sides work with one heart and one mind.

Both Gyawali and his Chinese counterpart Wang Yi agreed on the necessity of maintaining high-level exchanges and building of a network of interconnection and interoperability under BRI framework for a community of shared future. The major objectives of BRI are five: Policy, infrastructure, trade, financial connectivity and ‘people-to-people’ connectivity.

In this background, it’s safe to say that development of China-Nepal relations will move into a more comprehensive direction. The long history of friendly exchanges between the peoples of the two countries is the basis of friendship of the countries and the guarantee for future enhancement. While strengthening hard links such as trade and infrastructure, it is equally important to strengthen soft connections like people-to-people ties. Therefore, cooperation in exchanging tourists, students, think tanks, medias, religious groups and cultural and artistic products should be steadily upgraded. This way we will be able to achieve an all-dimensional bilateral relation that goes beyond geopolitics and economy.

The author is doing PhD on China’s frontier politics and minority issues at Sichuan University, China