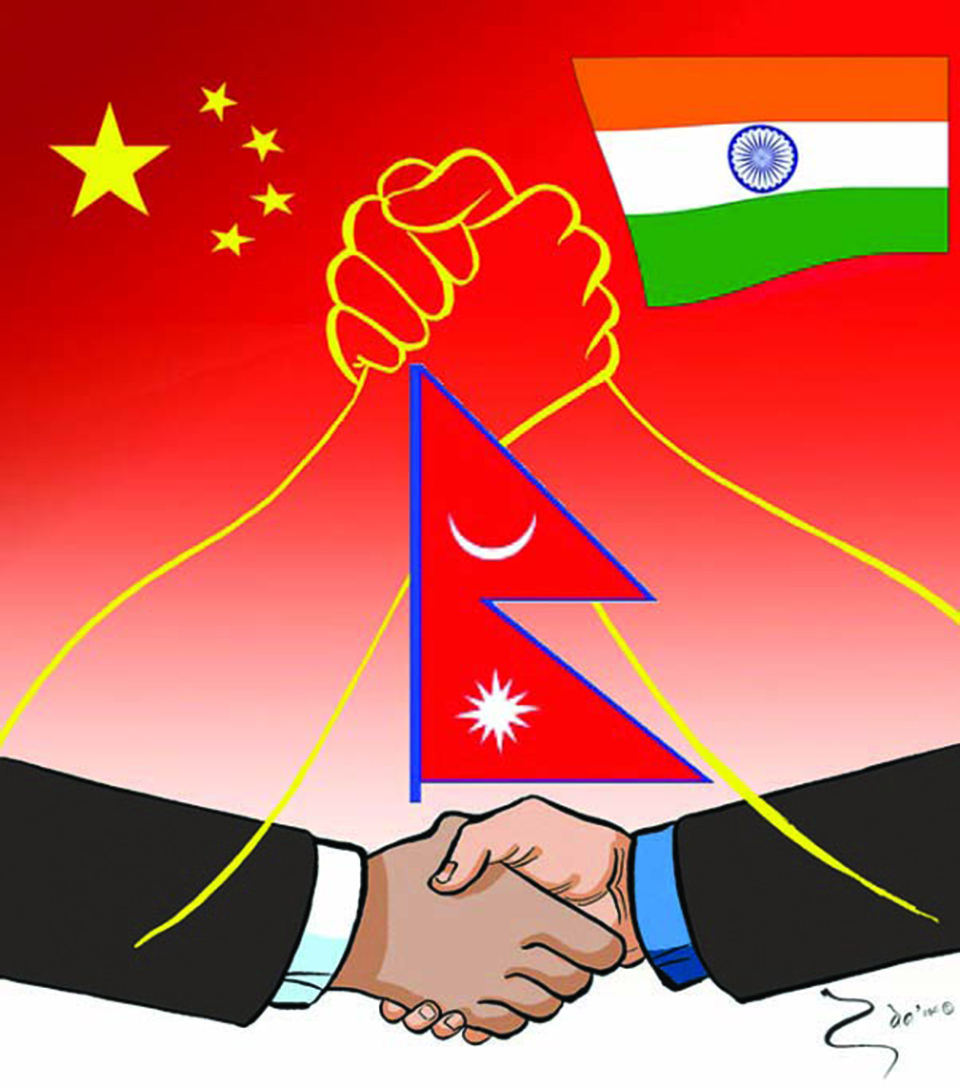 A basic model in celestial mechanics is called the three-body problem. It is a classical problem about the mutual attraction and trajectory of three celestial bodies. In simple terms, the interaction of any two of the three bodies under the effect of universal gravitation will cause a chain reaction of the third body. To a certain extent, this model can also be used to describe the relations between Nepal and China and India. When analyzing Nepal-India relation, it’s almost impossible to avoid China and vice versa.

Prime Minister K P Oli visited India in April. His Indian counterpart Narendra Modi reciprocated in May. In this background, as PM Oli is visiting China coming week there are speculations that this could hinder strengthening of Nepal-India relation. There are speculations regarding Nepal-China relations as well.

President Xi Jinping in 2014 proposed to build a new type of international relations based on win-win cooperation. China has always been taking a supporting and affirming attitude and “happy to see the healthy development of the relations between Nepal and India.” If history is any guide, China has never asked Nepal to take side even during the most intense period of Sino-Indian relations. On the contrary, China hopes that Nepal will benefit from the rapid development of the two major powers, China and India, and thus can steadily move toward stability and prosperity. The healthy development of the bilateral relations between the two countries will be a blessing for the well-being of peoples of both countries.

However, further development of the relations between any two countries should not be at the expense of relations with the third. It is absolutely unnecessary and impossible for China to create artificial rifts between Nepal and India since the civilization, history, religion, language, and ethnicities of these two countries are so closely linked. Such ties are the backbones of their bilateral relations, with which they can always find solutions to rejuvenate their friendship after every turmoil. The efforts of the Oli government in restoring relations with India and thus seeking further engagement of economic and cultural cooperation should not be taken as obstacle to the continued closeness of Nepal with China. As is the case, enhancement of China-Nepal relations is not the estrangement of relations between Nepal and India.

Lack of infrastructure has hindered Nepal’s prospect of economic development. The major areas of cooperation between China and Nepal under Belt and Road Initiative (BRI) framework are concentrated around transportation and energy facilities. These issues were also included in the relevant agreements reached with China during PM Oli’s last visit in 2016. It is believed that the feasibility of the construction of Keyrung-Kathmandu railway, energy investment including oil storage facilities, cross-border power grids, transit points and the establishment of free trade zone will be discussed during Oli’s visit to China coming week. As a matter of fact, these agendas will remain at the core of China-Nepal cooperation for quite a long time to come. The connectivity between Nepal and its two neighbors will enable Nepal to become a bridge between China and India, and even South Asia. The long-expected dream of being a transit country will become a reality.

Commentators are comparing the proposed China-Nepal railway with the agreements on railway linkage and inner water transportation reached with India during Oli’s visit to India in April. They argue that this reflects on escalation of competition and rivalry between China and India in Nepal. This argument ignores the fact that Nepal’s connectivity with China and India, instead of being competitive, is complementary to Nepal. The railway with China cannot replace the railway linkage with India, just like a strong right leg can never replace the left leg. Only when two legs are strong and in good health, a person can run fast.

Western region and eastern coastal areas of China are like its two legs. The developed eastern region cannot replace the relatively backward western region. The huge difference in regional development level is not conducive to the healthy development of the entire country. To accelerate the development of the western part by strengthening and broadening its opening to the outside world so as to balance the ever-growing developing gap is China’s main task in the new era. Nepal is located in the position that effectively links two countries whose populations add up to more than one third of the total population of the world. Neither India’s ‘Neighborhood First’ policy nor China’s Belt and Road Initiative can afford to bypass Nepal.

A perfect solution to the three-body problem is to achieve gravitational equilibrium when the three celestial bodies form an equilateral triangle. The trilateral cooperation solution also applies to the relations between India, Nepal and China. Although the three countries have different sizes and scales of development, their sovereign status in cooperation is equal. If trilateral cooperation is founded on this basis and successfully implemented, it will be a triple-win for three countries.

The relations between three countries should not be like a simple triangle theorem where the sum of two sides is bound to be greater than the third side. Let’s not forget that the triangular structure is the most stable engineering structure. Nepal has full potential to be a stage of cooperation instead of becoming a boxing arena of competition game.

Only the wearer knows if the shoes fits well, goes a Chinese saying. All analysts and policymakers should admit that Nepal, as an independent sovereign state, has the right to make any decisions that are in its national interests. It has the ability and wisdom to deal with its own affairs, although sometimes it may face expected and unexpected difficulties. Fortunately, with the development of Nepal’s internal political situation, there is a reason to hope that Nepal and Nepalis have become even more capable of and confident in dealing with all such difficulties.

ILAM, April 6: Even nine months after the formation of the local governments, lack of manpower has still been an unsolved... Read More...

BAITADI, April 2: With the rise in the mercury, the drinking water problem has resurfaced in Baitadi creating unwarranted difficulties... Read More...