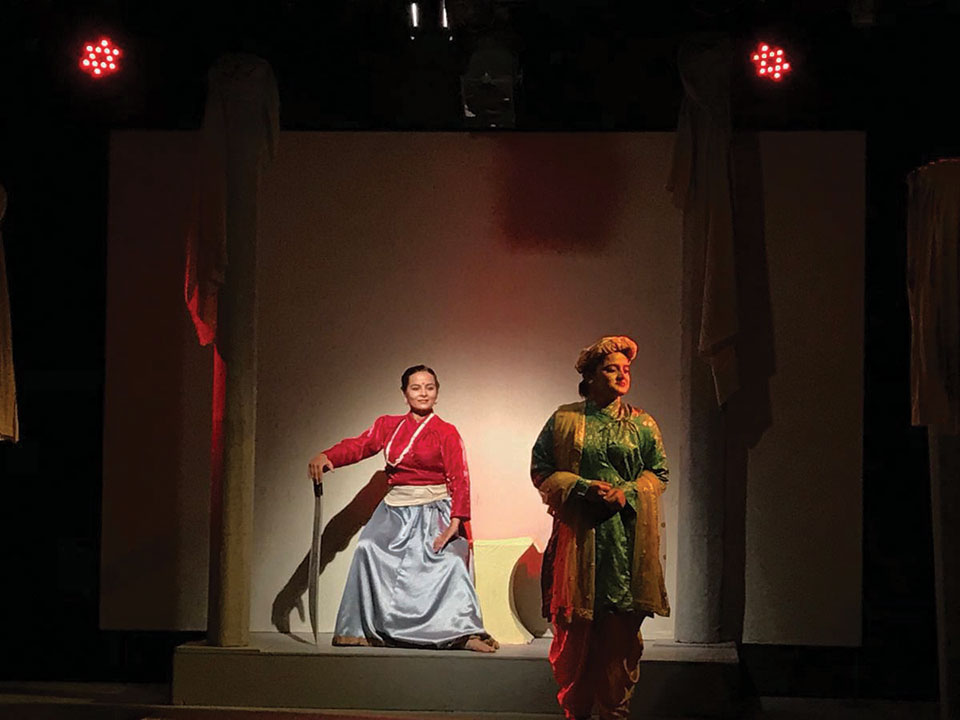 Transcending normative femininity is what makes Rajendra Laxmi notable, and we are encouraged to value her because she “acted like a man”

Rajendra Rajya Lakshmi Devi Shah was the first queen of the newly-created Kingdom of Nepal with its capital in Kathmandu. She was married to Pratap Singh Shah, one of Prithvi Narayan Shah’s sons, and is believed to have played a large role in continuing her father-in-law’s conquests to give shape to the Nepal that we know now.

A skilled warrior and a master strategist, Rajendra Laxmi’s role in the making of Gorkha Empire is unmistakably large, but her place in the cultural imagination vis-à-vis Prithvi Narayan Shah or even Pratap Singh Shah is small. Seeking to draw attention to her legacy and her life story, a play titled “Rajya Laxmi” was staged in Mandala Theatre, Anamnagar, from June 22- July 8 by Aesthetic Dance Studio.

According to Mandala Theatre’s website: “Through the staging of this dance-drama, Aesthetic Dance Studio aims at strengthening women’s role in Nepali society by highlighting the courageous life-journey of the Queen regency Rajendra Laxmi Devi Shah in a larger scale, which is often expressed in a very limited version by our history.” The reception of the play has been overwhelmingly positive, with various news outlets lauding it as the next great feminist theatrical achievement, but in the face of almost unanimous praise from so many quarters, the question that needs to be answered is which women, whose history and whose bravery are we willing to celebrate?

An early scene in the play shows a young Rajendra Laxmi disguising herself to play catch with “commoners.” Upon finding that they have been chasing around the princess herself, one of the girls exclaims “You are big and we are small, you shouldn’t play with us.” Rajendra Laxmi, a benign, principled royal, of course, replies “raja, praja, sabai ek” (rulers and subjects are all equal). As the princess grows older, we see her swordsmanship and combat skills become exceptional, and her parents grow increasingly worried about her abandonment of “proper womanhood.” Rajendra Laxmi eventually yields to her father’s appeals to be a good daughter and marries Pratap Singh, but even as she performs the duties of a mother and a wife we are reminded that her true calling in life is to “unite” Nepal and that she is destined to military greatness.

Elitist narrative
According to the play, Rajendra Laxmi is lots of things—a rebel, a dutiful daughter, a warrior, a doting mother, the quintessential “empowered woman.” But something that is disproportionately emphasized is her “heroism” in conquering and conquering even more, birthing, so to speak, the nation-state of Nepal in all its Gorkhali glory. The play self-consciously positions itself as a feminist retelling of Nepali history that places those who are forgotten, the women, at the centre of the story and the stage. The problem is that the play Rajendra Laxmi doesn’t retell history as much as add a pseudo-feminist sprinkling to an essentially masculinist, elitist narrative.

The audience is supposed to see Rajendra Laxmi as an extraordinary woman because of her military prowess. The message here is clear: a woman is worth celebrating when her aspirations are dominance and combat. Transcending normative femininity is what makes Rajendra Laxmi notable, and we are encouraged to value her because she “acted like a man.”

The problem with this vein of “feminist” storytelling is that it does not challenge patriarchal norms at all. If being a memorable historical figure requires a woman to wage war and be as proximate to traditional masculinity as possible, is this not an implicit endorsement of “manly” aggression, subjugation, and naked pursuit of power as essentially good, and “womanly” deviance from these values as inherently inferior?

The other glaring issue with Rajendra Laxmi is the fact that with its superficial progressivism, it tries to mask a commitment to the value that the “unification” of Nepal and all the barbarity that surrounded it was inevitable and a monumental achievement that we should be grateful to the Shahs, and to Rajendra Laxmi in particular. Ten years after the end of the monarchy, have we not reached a point where we can let go of this hegemonic narrative? The myth of royal valor and kindness blatantly (and cruelly) ignores the violence that was integral to the building of the Nepali nation-state, and promotes the understanding of autocratic rule as essentially righteous.

The problem is not with one play alone. Ideological commitments aside, Rajendra Laxmi is a labor of love that is altogether enjoyable to watch and consists of some stellar performances. However, the play is part of the trend in Kathmandu’s current cultural milieu where cosmetic refurbishing of things that ultimately support the status quo are showered with acclaim.

Subverting dominant narrative
Subverting dominant “his” stories need to do more than insert women into stories about power-hungry men, and female bravery needs to be recognized even and especially when it doesn’t involve the emulation of “bir” manliness. Rajendra Laxmi and her royal compatriots are not the feminist cultural icons we need today.

In a deeply divided society, it is perhaps counter-productive to refashion historically controversial figures into role models. Nationalists in India have tried to rebrand Rani Laxmibai, the Queen of Jhansi, as a symbol of resistance to the British Raj for her “manliness.’ In every tale of what historian Pratyoush Onta has aptly named “Bir History” of Nepal, travails of commoners of all genders is completely neglected. Making women characters endorse the same royalist narratives of patriarchy is not feminism. It’s merely sugar-coated conservatism.

The author recently completed a degree in anthropology and religion from Swarthmore College, Pennsylvania
lal.abha.96@gmail.com