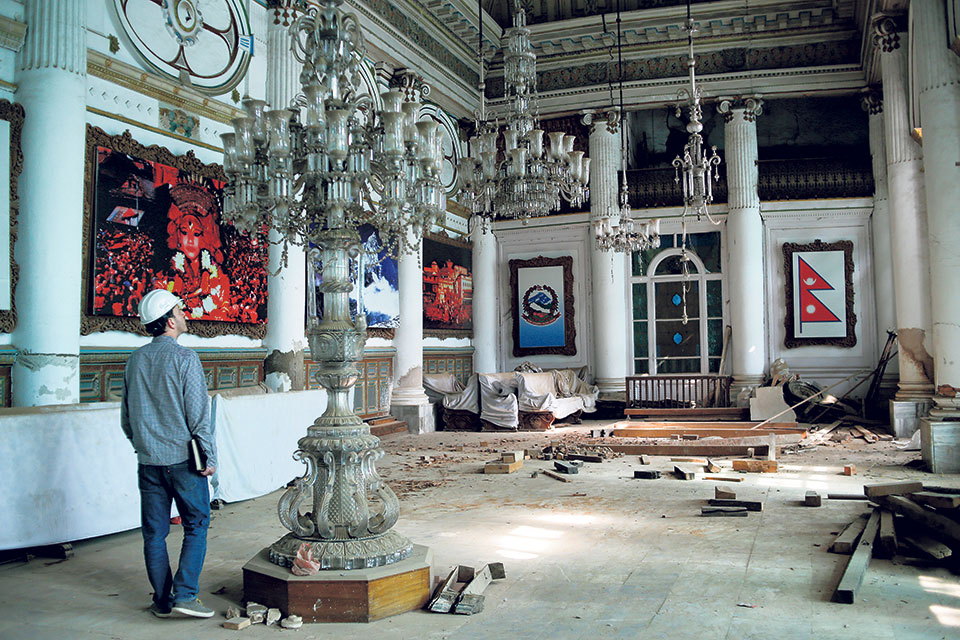 Three years ago, if you happened to be walking westward from the New Road junction you would be greeted with Malla era palaces on your right. You would stop for a while to admire the magnificent architecture you had read about in history books back in school. If you went further west, you would walk past a white palatial structure on your right. At the end, security personnel would be guarding the entrance.

I have been to Kathmandu Durbar Square and Hanuman Dhoka a number of times and I remember these details.

I have wondered about these palaces from where the country was ruled since the days Prithvi Narayan Shah declared Kathmandu the capital city in the late eighteenth century. Royal families were moved to the Narayanhiti palace from Hanuman Dhoka some time in 1886. The Narayanhiti palace remained the home of kings and queens until the monarchy was abolished in 2007.

I often visited the Hanuman Dhoka museum and was always intrigued by the meeting rooms. This was where the kings held national consultations, where they issued decrees in the name of people, and also where they met and welcomed foreign delegates.

After the earthquake struck in 2015, one of the first thoughts I had was about what might have happened to the Hanuman Dhoka that had already been in a dilapidated state. Had the earthquake completely destroyed it?

The building where the coronation ceremonies of King Tribhuvan, King Mahendra, King Birendra and Former King Gyanendra were held was destroyed. The place from where the ruling king used to grace the Indra Jatra festival and pay respect to Goddess Kumari had also been destroyed. Also, the place from where presidents and prime ministers continued these royal traditions in the republican order was badly damaged as well.

The Gaddi Baithak—the hall with the Royal Seat—met the same fate.

Constructed in 1908 by the Rana Prime Minister Chandra Shamsher in neo-classical style as a royal residence of the kings, Gaddi Baithak has a lot of historical memories associated with it. The tradition of chariot processions of Kumari started from the premises occupied by Gaddi Baithak from the 17th century. The south balcony of the building was used to worship Goddess Kumari and kings and queens would watch the chariot procession of Indra Jatra from there.

Even after the end of Rana rule, the original royal house was considered to be Gaddi Baithak. “The first meeting of advisors’ assembly after the 1950’s change was held there,” recalls former foreign minister and author Ramesh Nath Pandey. It was used as a meeting place between kings and foreign delegates even up to 1959. “The last diplomat to present his credentials to the king in this place was a Chinese ambassador in 1960,” he says adding it was perhaps Pan Zili.

Gaddi Baithak, which was listed as a UNESCO World Heritage Site in 1979, continued to be used as the building to settle important affairs, hold official meetings with foreign guests and receive appointment certificates from heads of foreign diplomatic missions.

For the generation that saw the fall of monarchy, coronation of Former King Gyanendra may have been the only memory associated with Gaddi Baithak of Hanuman Dhoka. Former King Gyanendra was crowned there and the coronation procession moved to the Narayanhiti palace. But even though the kings lived in Narayanhiti palace, they considered Gaddi Baithak as the real house of the throne. This is why every major royal ritual was held at Hanuman Dhoka.

The Rana rulers also used Gaddi Baithak as the venue to meet foreign delegates. One of the reasons could have been the policy of selective exclusion exercised by the rulers of the times. “Foreign guests were not taken to the ruler’s residence. They would be welcomed and entertained outside,” said historian Gyan Mani Nepal.

Reconstruction of Gaddi Baithak
This edifice of Nepal’s history is being restored with the assistance from the United States government. “Rebuilding it has not been so easy because it was built in neo-classical style and because this is the UNESCO heritage site, modern materials cannot be used,” said Bryce Neuman, senior earthquake resiliency specialist and structural engineer of Miyamoto Global Disaster Relief that is working to rebuild Gaddi Baithak.

Miyamoto is working to reinstate the former grandeur of this place and increase its resiliency to possible future earthquakes. The work formally started when, on September, 2016, US Assistant Secretary of State for Educational and Cultural Affairs Evan Ryan announced US government’s Ambassador’s Fund for Cultural Preservation grant of US $700,000.

“We had to proceed slowly and with grace,” said Bryce. “Every crack, every detail was studied and then suitable materials were collected and tested at the lab before they were used.” The focus, he said, is on ensuring sustainability.

The materials being used are largely local. They are using bricks salvaged from the building and special bricks are being manufactured for this purpose in Bhaktapur.  Around 10 skilled masons and carpenters, apart from normal workers, are working day in and day out on the ground. “Around 60 percent of the work has been completed,” informed Project Manager Mukesh Bista.

After the construction is complete, we will get back a structure with a lot of stories and historical memories. History does not get written on its own. It cannot be built on abstractions. It needs some symbols, some concrete structures that can communicate stories. One of those symbols, Gaddi Baithak, is being rebuilt.  The people who are working for this cause—workers on the ground, engineers, government bodies and the US government that is funding the project— are contributing to the vital task of preserving history.

No progress in rebuilding quake-damaged monasteries

KATHMANDU, April 2: Almost two years have elapsed since the devastating earthquake of April 25, 2015 occurred but not even... Read More...