Residents not happy with substandard roads 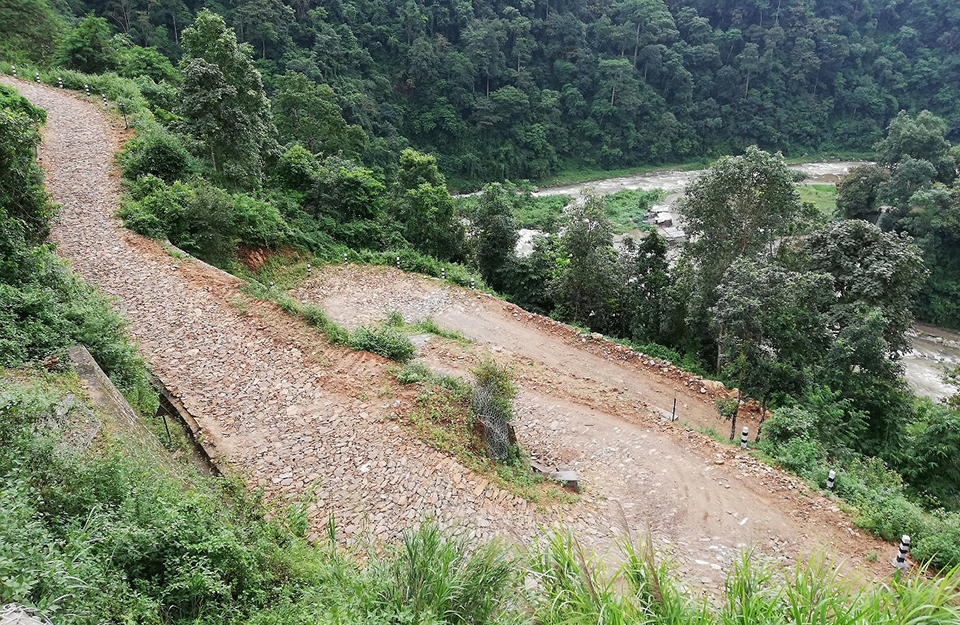 ILAM, Nov 14: Despite spending, what locals claim to be massive budget, on repairing and upgrading roads, they remain in a dilapidated condition in Ilam. Locals lament that the roads have not only made their everyday life difficult but has also affecting Ilam's otherwise beautiful landscape.

"We are seriously disturbed with the condition of the road. Until a few years ago, we did not have too many roads around here. Life was difficult in lack of them. Now, we do have roads, but we are again in trouble," said Lata Sharmam, a resident of Ilam Bazar. "These roads are simply not usable. During summer they are full of dust and during rainy days they look like paddy field. Almost all the roads are in the same condition."

During the elections last year, repairing and upgrading roads was among the topmost priority of the politicians. Whoever came to the doorstep of Sharma vowed that the first thing he or she would do is nothing but upgrading of the roads. They said that the roads would be wide and smooth.

"However, nothing such has happened. We are disappointed with the local government and the provincial government. They have paid no heed to such a crucial matter. Roads have always remained our top most concern," Sharma said.

Locals feel that the roads have met even worse fate after the local representatives assumed office. To show their work, most of them used dozers 'haphazardly'.

"Many roads around here are in a dire state. The government's money is going waste in the name of roads. The candidates who had earlier promised that they would develop their place tried to do it, but they did it in a very wrong way," Sharma noted. "They took dozers to their targeted areas and started digging land for roads. You don't need any study, any DPR made, any measurement. You are only bothered about taking road to your home, your village. This has, in fact, ruined the beauty of Ilam," she added.

After the formation of the local government, many roads in Ilam have been widened. Similarly, many new routes have been developed. However, this has failed to please some of the residents as lack of quality in the newly developed roads have been developed without focusing on quality and environment preservation, she said.

Since the formation of local government, many new road tracks have been constructed in Ilam. Most of these roads do not comply with road safety standards and are prone to accidents. Locals are not happy with government for controlling haphazard development.

"Accidents have become common around here. You hear of death and injuries every new day. When roads are prone to accident, that is bound to happen. In the name of road, we have invited disaster," Sharma remarked.

"Old and new roads alike are in need of repairs. But seems authorities concerned have not taken a note of it. We have senior leaders out there, they also always make tall promises, but do nothing about the roads," Sharma fumed.

Both Nembang and Khanal have allocated budget for repairing and upgrading roads. Under this, upgrading of some of the roads is presently even underway. But this has failed to impress the public in lack of monitoring and slugish implementation by the contractors.

"Just allocating budget is not enough. Authorities concerned have to make sure that the work is done properly. Or else, development can invite disaster," Sharma said.

According to Grishma Subba, president of Purebeli Jeep and Taxi Private Limited, the government spends millions of rupees every year to improve the roads. But the money is being wasted.

"Every year we hear that massive budget has been approved for upgrading and constructing roads. But I wonder where does this budget go? Every year the roads are only getting worse," he said. "Dilapidated roads not only shorten our lives but also shorten the lifespan of our vehicles," he added.

KATHMANDU, May 31: The Federation of Handicraft Associations of Nepal (FHAN) on Wednesday said that the government has neglected the handicraft... Read More...