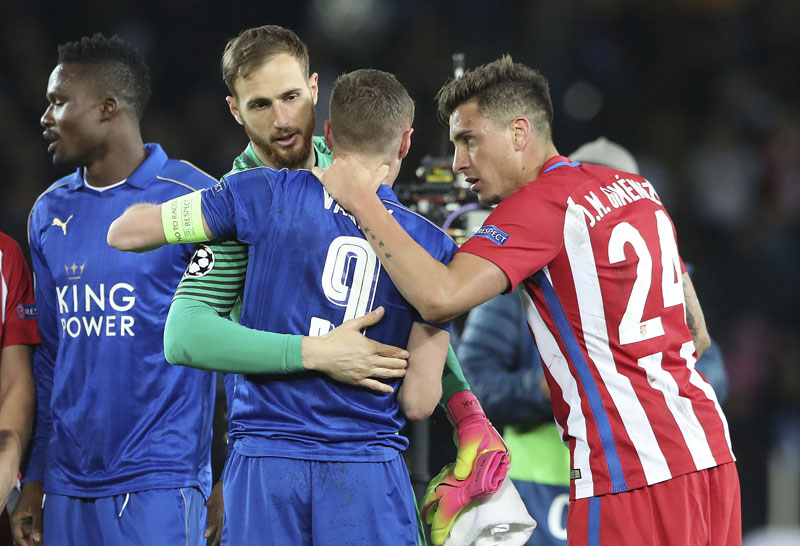 Leicester City's Jamie Vardy, center, is consoled by Atletico Madrid's Jan Oblak and Jose Maria Gimenez, right, after the the second leg of the UEFA Champions League quarter final at the King Power Stadium in Leicester on Tuesday. AP

LEICESTER, April 19: The weariest Leicester players collapsed to the field as their teammates received the consoling embraces of their rivals from Atletico Madrid.

For the unlikeliest of Premier League champions, England's last remaining representatives in the Champions League quarterfinals, the journey ended in a 1-1 draw Tuesday night.

It was the end not only of Leicester's first foray in European soccer's elite competition, but also the incredible ascent of the modest central England club that had gatecrashed the soccer hierarchy in a run that captured global attention.

Leicester didn't go out meekly — that wouldn't be the style of the team that seized the Premier League title for the first time last May with a 10-point advantage. Instead, the quarterfinal second leg provided a snapshot of the kind of resolve that stirred a remarkable chapter in the history of Leicester City.

Outplayed in the first half, allowing Saul Niguez space to score unmarked with a header, Leicester went back to the direct style that so unsettled opponents in its title-winning campaign. Jamie Vardy, the striker signed from a non-league club five years ago, powered in an equalizer just after the hour-mark.

In an exhilarating conclusion at the King Power Stadium, Leicester harried Atletico but was left frustrated as Diego Simeone's well-drilled defense got bodies in the way of shots.

The 1-1 draw left Leicester exiting the Champions League with a 2-1 aggregate loss to a team that has contested two of the last three finals.

"We have to be proud of ourselves, we gave our all," said captain Wes Morgan, who returned for a month-long absence. "In the second half, we threw everything we had at the goal. They had a few blocks on the line."

Even Simeone was in awe, with the coach of the notoriously dogged Atletico side meeting his match in Craig Shakespeare's squad.

"What a great performance from our competitors tonight. It was almost a pleasure to compete against them," Simeone said through a translator. "They never gave up for one minute. They didn't let their heads drop. We lived in fear all night of what they might achieve as they were coming forward ... they pushed us all the way."

Far more so in the second half after a tactical switch from 4-4-2 to 3-5-2 by Shakespeare, who has spent two months as the temporary replacement for Claudio Ranieri, the architect of last year's Premier League title triumph who was fired in February.

The introduction of flying wing back Ben Chilwell and Leonardo Ulloa to provide a greater aerial threat up front ruffled Atletico.

"What they did superbly was getting lots of people down the flanks. They put lots of crosses into Leo Ulloa," Simeone said. "He caused plenty of problems in the area."

Now the Leicester players need to continue that form in the Premier League. This season is ending with a more modest target: Survival. Shakespeare has arrested the freefall of the final weeks under Ranieri, but Leicester is nine points above the relegation zone in 12th place with six games remaining.

"We have given a great account of ourselves (against Atletico)," Morgan said. "Being the last English team getting to the quarterfinals on our Champions League debut is a massive achievement and we can leave the competition with our heads held high."

Whether Leicester returns to the competition in the near future appears unlikely. But this is a club that was in the third-tier nine years ago. On the basis of that improbable and rapid climb, little will seem impossible for the years or generations to come at Leicester.

For now, Leicester's players and Thai owners will have to get used to a more mundane reality returning to a club slipping out of the limelight, in the shadows once again of more illustrious English counterparts. The enchanting exploits they produced on the field, will live on.