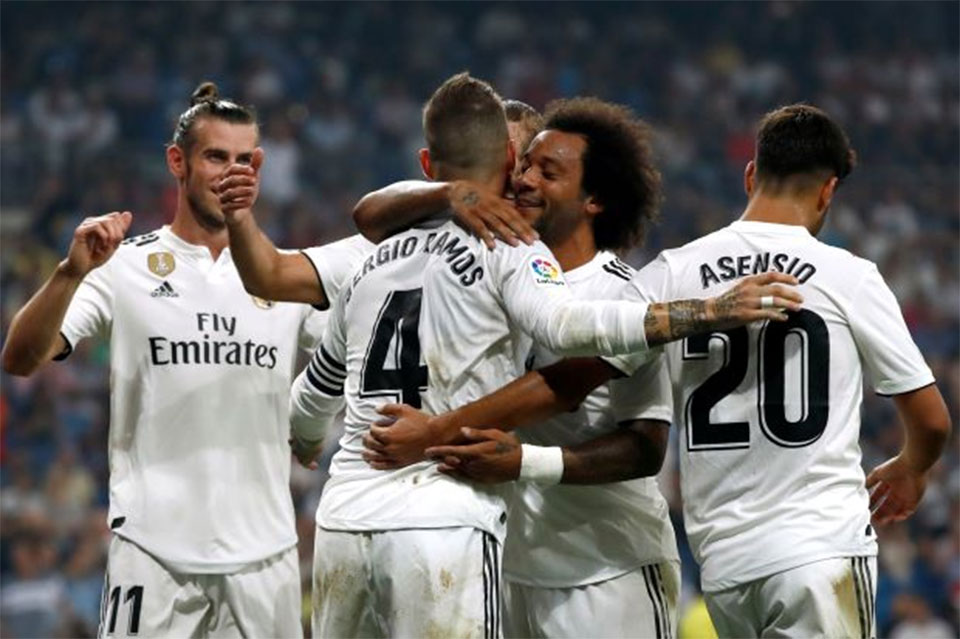 MADRID, Sept 2: Real Madrid continued their perfect start to the Liga season by thrashing neighbours Leganes 4-1 at the Bernabeu helped by a Karim Benzema double, while Atletico Madrid slumped to a 2-0 defeat away to Celta Vigo on Saturday.

Gareth Bale scored for the third game running to give the hosts the lead in the 17th minute but Leganes pulled level with a penalty as Real debutant Thibaut Courtois was powerless to stop Guido Carillo’s spot kick in the 24th.

Benzema headed Real back in front shortly after the interval although the goal was only given after the referee consulted the video assistant referee (VAR) to determine whether the French striker had committed a foul.

Benzema then struck his fourth goal in two league games from a delightful backheel by newly-crowned UEFA Player of the year Luka Modric, moving to within one strike of equalling his tally of five league goals over the whole of last season.

The Frenchman had the opportunity to complete a hat-trick when Madrid were awarded a penalty after lively winger Marco Asensio was tripped by Unai Bustinza, but captain Sergio Ramos took responsibility for the spot-kick and completed the rout by scoring for the second game in a row from the spot.

Real lead the standings with nine points and 10 goals, although champions Barcelona can match that perfect start when they host top flight debutants Huesca on Sunday.

“We are getting to know each other better, we are training more and we have managed to get the team playing like a true team,” said Real coach Julen Lopetegui.

“They understand what is being asked of them and they have the ability to make it happen.”

Diego Simoene’s Atletico suffered their first major setback of the season with the reverse at Celta following a hapless second half display in which they conceded two goals in quick succession and had defender Stefan Savic sent off.

Celta’s Uruguayan striker Maxi Gomez put the Galicians ahead after the break after a slip by compatriot Diego Godin and Iago Aspas doubled the lead in the 52nd with a header the day after being dropped from Spain’s squad by new coach Luis Enrique.

Things got worse for Atletico after 70 minutes as Montenegro defender Savic was dismissed for a second booking and a minute later they thought they had conceded again but Gustavo Cabral’s effort was ruled offside by the video assistant referee (VAR).

Atletico have four points from their opening three games and are already five adrift of local rivals Real in the title race.

“I’m not worried about this result, I’m calmer than ever, because this is a wake-up call for us. I’ve no doubt this is the best thing that could happen for us,” Simeone told reporters.

“We didn’t play well, Celta were lethal, while we had chances at the end of the first half which we could have done better from. We didn’t take them and in the second half they killed the game off in five minutes and they deserved to win.”

Celta’s Argentine coach Antonio Mohamed said the result should make his side realise what they are capable of.

“To beat a team as great as Atletico you have to play a perfect game and that’s what we did. Today should motivate us to believe in ourselves and believe that we can do great things,” added Mohamed, whose side have seven points after three games.

“This is a very tough league but we will keep improving. This win is a huge boost in confidence for us.”

Fernando Torres's head injury shocked his Atletico Madrid team mates as the striker had to be carried off on a... Read More...