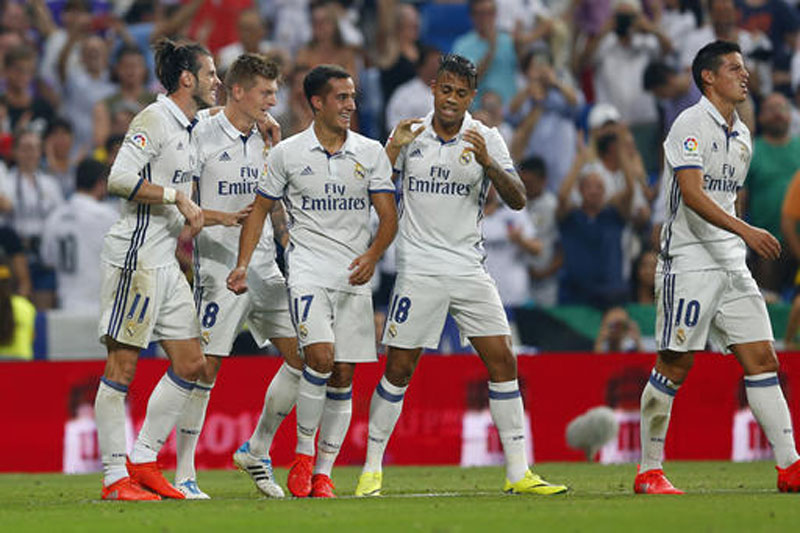 BARCELONA, Aug 28: Toni Kroos' late score ensured Real Madrid won its home opener over a feisty Celta Vigo 2-1 on Saturday, while Atletico Madrid stumbled in a second straight round of the Spanish league.

Atletico was frustrated by a newly promoted side for the second time in a week after Diego Simeone's bunch drew at Leganes 0-0. That followed its 1-1 stalemate with Alaves in its opener.

Combined with Madrid's two wins, Atletico trails its crosstown rival by four points from the start of what it hoped could be another three-team title race along with defending champion Barcelona.

Atletico forward Antione Griezmann was scathing with his criticism of the team's start to the season.

"If we continue like this we will be fighting to avoid relegation," Griezmann said. "We are angry. We have to get our act together because this is slipping away from us. We must work to get back to being ourselves."

Kroos drilled a long-range shot along the turf and in off the post for the 81st-minute winner at the Santiago Bernabeu.

Playing without the injured Cristiano Ronaldo and Karim Benzema, Madrid took an hour to break through when Alvaro Morata scored a rebound from a save by goalkeeper Sergio Alvarez.

"We believed until the end and pulled it off," Madrid coach Zinedine Zidane said. "We played a so-so match. Celta was a very good team."

While Madrid's Luka Modric, Gareth Bale, and Morata all hit the woodwork, Celta squandered dangerous moves that it continued to mount until the final whistle. The visitors only lacked the scoring touch that new Manchester City forward Manuel "Nolito" Agudo provided for the previous three seasons.

"We played one of our best matches at this stadium," Celta manager Eduardo Berizzo said. "I liked our attitude. We were able to take the game to them. This is an example to others who face opponents that belong to another category."

Elsewhere, Valencia slumped to a second consecutive loss after falling at Eibar 1-0, while Real Sociedad got on track by winning at Osasuna 2-0.

Valencia's latest defeat comes with the club close to selling Germany defender Shkodran Mustafi to Arsenal, and Barcelona negotiating to sign away striker Paco Alcacer. Neither player was on Valencia's team at Eibar.

Theo Bongonda went the closest to scoring for Celta in the first half when he won possession, hurdled a tackle, and fired into the side netting of Kiko Casilla's goal.

To start the second half, Celta mounted three attacks in a row that lacked only a final, precise pass to put Casilla under pressure.

That's when Bale took a step forward, blasting a free kick that Alvarez pushed onto his bar before Morata put the hosts ahead.

Modric cued the opening goal by intercepting a poor pass by Alvarez, who then blocked Marco Asensio's weak effort. Morata was there to fire in the rebound for his first goal since returning from Juventus this summer.

Celta's equalizer went through Pablo Hernandez, Daniel Wass and John Guidetti before Orellana beat Casilla from distance with a right-footed shot into the corner of the net.

Kroos got the decisive strike, but Celta went close to grabbing a second goal in a back-and-forth exchange in the dying minutes.

Zidane also said Colombia midfielder James Rodriguez, who has lost his starting role, will remain at the club despite rumors of his exit.

A minute of silence was held before kickoff in memory of the earthquake victims in Italy.

At Leganes, Atletico could go no closer than shots by Griezmann, Kevin Gameiro and Yannick Carraso saved by goalie Jon Serantes, whose Leganes remained unbeaten in its debut topflight campaign.

Remembering Osho on his Mahaparinirvana Day
14 hours ago

India vaccine developer warns some to avoid shot
10 hours ago

Remembering Osho on his Mahaparinirvana Day
14 hours ago