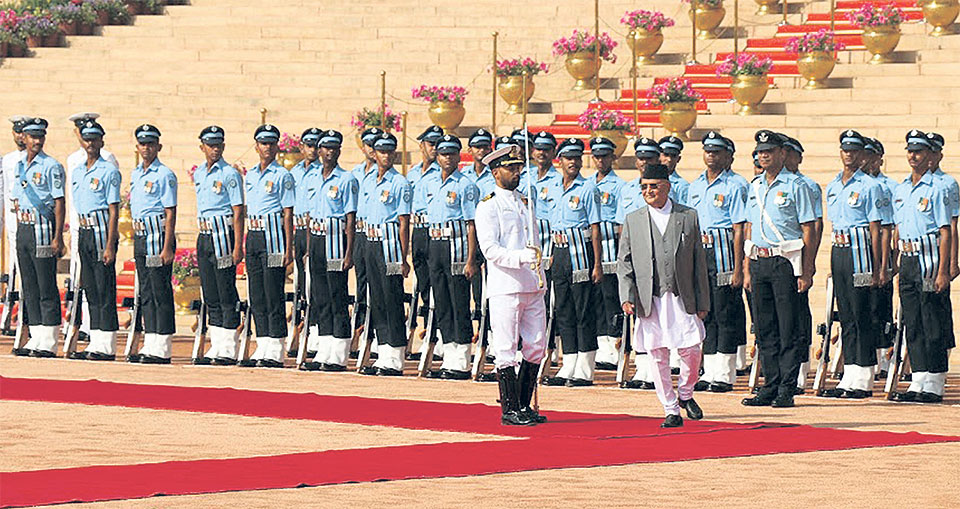 KATHMANDU, April 8: Nepal and India have agreed to develop "an electrified rail line" connecting Kathmandu with Raxual of Bihar, as the two sides signed several crucial agreements on Saturday with a spotlight on strengthening connectivity.

The agreement, which comes two years after China agreed to develop a rail link to Kathmandu via Tibet, was one of three new accords signed during Prime Minister Khadga Prasad Sharma Oli's ongoing India visit.

Oli embarked on his visit to India on Friday at the invitation of his Indian counterpart Narendra Modi, three months after being appointed prime minister with the support of two-thirds of the MPs in parliament.

The rail line, which was the highlight of a 12-point joint communiqué issued by Oli and Modi, is aimed at expanding connectivity to enhance people-to-people linkages and promote economic growth and development of the two countries.

Other notable agreements signed between the two countries include a separate memorandum of understanding for partnership in agriculture and an accord to develop inland waterways for the movement of cargo.

The inland waterways are expected to give landlocked Nepal additional access to the sea, while bilateral cooperation in agriculture will seek to benefit farmers, consumers, the scientific community as well as the private sector through exchange of knowledge and technology.

The agreements and MoUs were signed after a meeting between Oli and Modi at Hyderabad House on Saturday. During the meeting, the two sides had also agreed to expedite all Indian-assisted projects that are pending, including  Arun-3, Pancheshwar and Saptakosi-Sunkosi. Oli also urged India to invest more in Nepal, especially in the development of hydropower.

On the occasion, Oli  thanked Modi and the people of India for their cordial welcome and extended an invitation to Modi to pay an early visit to Nepal. Modi accepted the invitation.

At a  function organized after the meeting, Oli and Modi jointly inaugurated the Integrated Check Post at Birgunj and the Motihari-Amlekhgunj cross-border petroleum products pipeline at Motihari.

The deal on the rail line, which officials said was inked without adequate preparation, has been seen as India's counter to China's plan to develop a rail line connecting Tibet with Kathmandu, Pokhara and Lumbuni.

The Tibet-Kathmandu-Pokhara-Lumbini railway, which is in the planning phase, was the major highlight of fthe first ever trade, transit and transportation agreement that Nepal signed with China in March, 2016, during  Oli's first stint as prime minister.  The landmark agreement, which many see as a much needed step in decreasing land-locked Nepal's dependence on its southern neighbor, was signed on the heels of the economic blockade imposed by India.

Oli's India visit, which was a continuation of the tradition of  Nepali prime ministers visiting India before other countries, has been described  as a major step in bringing a thaw in relations between the two neighbors.  These relations have remained tense since Nepal promulgated a new constitution in 2015. India, which expressed reservations over some provisions of the constitution, had merely noted  the historical document endorsed by 90 percent of lawmakers in parliament.

At a press conference organized after the meeting, Oli and Modi described the visit as an important step forward in cementing ties between the two neighbors which share an open border.

"I believe that the historic initiatives that we have taken today will make an important contribution in realizing our vision of the development of both  countries," Modi told media during the joint address.

Is the ruling alliance pulling an ‘election stunt’ in Nijgadh?
3 minutes ago