DADELDHURA, Nov 8: A rally was organized in Dadeldhura on Thursday in support of Dr Govinda KC, who has been on a hunger strike there since Monday.

On Thursday, locals and different organizations participated in the rally led by the civil society in support of Dr KC who has started his 17th fast-unto-death demanding reforms in the medical educational sector. According to the participants, they participated in the rally as the government didn’t implement the agreements reached with Dr KC during his 16th fast-unto-death. The participants were carrying placards bearing different slogans in support of Dr KC.

Ramesh Joshi, coordinator of Dadeldhura’s civil society, said a march started from Buspark and converged into a rally at Tufan Dada, where Dr Kc started his latest hunger strike with a seven-point demand. “The demands of Dr KC are genuine. There have been several protests in Dadeldhura demanding reforms in the medical education sector. Dr KC has been demanding affordable health service since long,” he said, adding the government has not paid any heed to Dr KC’s  demands though it’s been four days since the hunger strike started.

Meanwhile, Dr KC’s blood pressure has been fluctuating, but the pulse rate is normal. According to Dr Jitendra Kandel, a doctor at Dadeldhura Hospital, ketone bodies have been found in Dr KC’s urine. 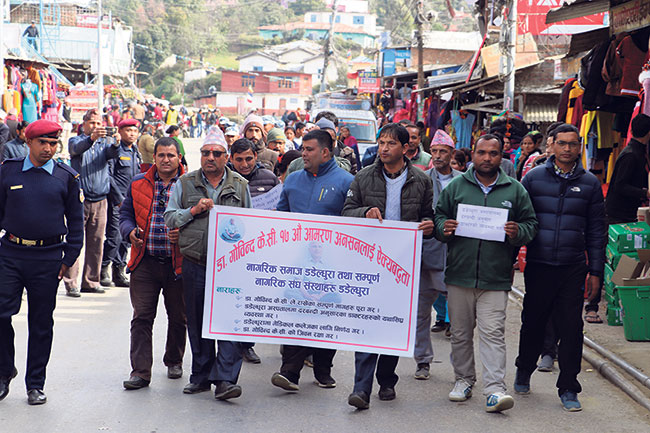 Participants of the march in support of Dr. Govinda KC organized in Dadeldhura on Thursday. Photo: Republica

Doctors threaten to boycott all but emergency and COVID-19 services