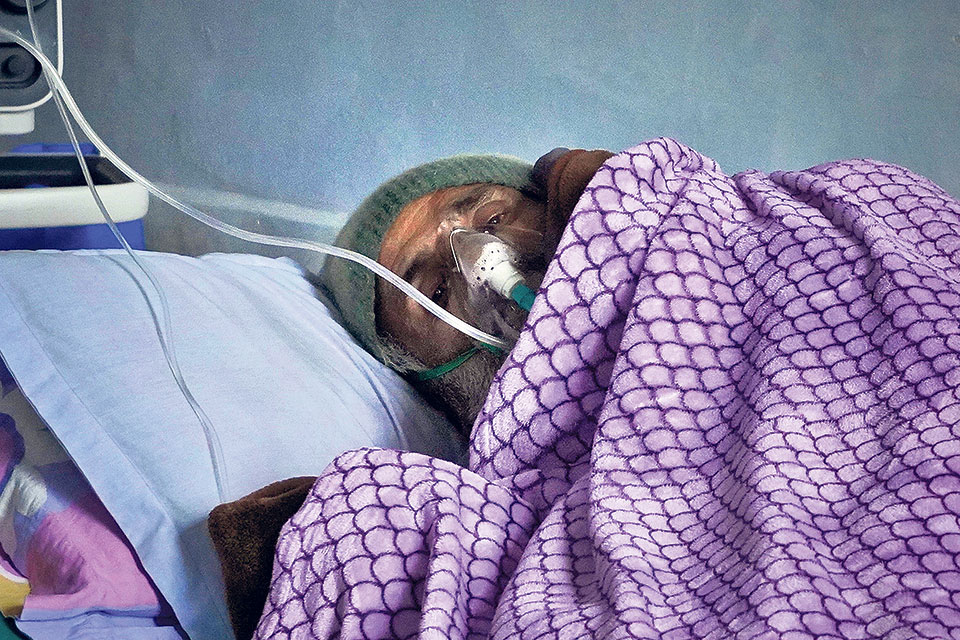 Dr Govinda KC on the 15th day of his fast-unto-death at Maharajgunj, Kathmandu on Wednesday. Dr KC launched his 16th fast on January 9, protesting a 'mafia-oriented' Medical Education Bill prepared by a parliamentary committee. He is demanding full implementation of the agreement signed between himself and the government on July 26 last year. Photo: Bijay Gajmer/Republica

KATHMANDU, Jan 24: The resident doctors at the government-run medical institutions and academics have warned that they would boycott outpatient services from January 25 in support of the hunger strike staged by senior orthopedic surgeon Dr Govinda KC if the government did not heed his demands for crucial reforms in the medical education sector. Dr KC’s hunger strike was on 15th day on Wednesday.

According to the National Resident Doctors Association (NRDA), resident doctors at various hospitals boycotted outpatient services for two hours on Wednesday to protest against the apathy of the government toward medical sector reforms.

Resident doctors of the Tribhuvan University Teaching Hospital, Bir Hospital and BP Koirala Institute of Health Sciences (BPKIHS), Dharan, in a joint statement on Wednesday said they would stage sit-in protests and submit memorandums to various top officials and politicians on Wednesday and Thursday.

“If the government still refuses to act on Dr KC’s demands, then we will boycott all outpatient services from January 25,” the statement said. “However, emergency services will not be affected immediately.”

The resident doctors had started wearing black bands around their arms at work from January 20 demanding that the government heed Dr KC’s demands and save his life. “After the government did not listen to us, we are forced to take harsh steps,” said the joint statement issued on Wednesday.

Dr KC launched the 16th fast-unto-death on January 9 dissatisfied with the parliamentary committee for preparing ‘mafia-oriented’ Medical Education Bill. He has already staged hunger strikes for over 210 days in the course of his 16 fast-unto-death protests since 2012, demanding crucial reforms in medical sector.

The senior orthopedic surgeon has put forward a five-point demand  to the government ... Read More...

KATHMANDU, Jan 20: Nepal Medical Association (NMA) has drawn the attention of the government toward the deteriorating health condition of Dr... Read More...

No decision on home ministry leadership until full text of SC’s verdict on Rabi Lamichhane is out: PM Dahal
49 minutes ago