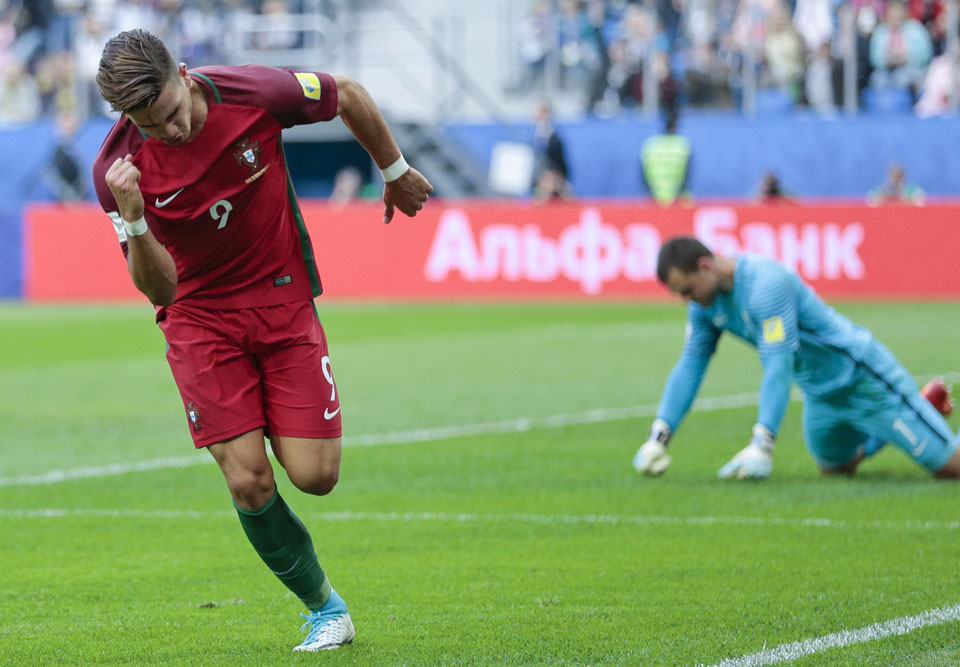 The strategy helped Ronaldo get his 75th international goal and Portugal an ultimately easy 4-0 win at the Confederations Cup on Saturday.

It also cost Portugal the services of Pepe in the semifinals. The tough defender is suspended for being shown a yellow card for a crude challenge just before he could be substituted.

Pepe is set to miss facing Germany or Chile after helping Portugal top Group A ahead of Mexico on goal difference. Mexico also advanced by beating host Russia 2-1 in Kazan on Saturday.

"If I knew it was going to happen I would have replaced him," said Portugal coach Fernando Santos, who had a replacement warming up when Pepe saw yellow in the 56th minute for a hard, high tackle.

The type of challenge that made Pepe's reputation was exactly what he curbed when being central to Portugal's 2016 European Championship title.

Still, Portugal won that final against France after Ronaldo went off injured, and the 32-year-old forward is at the heart of his team in Russia.

"We will play a difficult opponent whoever that will be, Chile or Germany, two great teams. But we are confident," Ronaldo said in Portuguese.

Ronaldo's second goal of the tournament was a penalty that opened the scoring in the 33rd minute.

His sharp headers could have turned a comfortable win into a rout. Three times he arrowed the ball too close to New Zealand goalkeeper Stefan Marinovic, who leaped to push one first-half effort against the crossbar.

When Ronaldo began to dominate All Whites defenders in the air midway through the first half, an aerial challenge saw him left in a heap.

Ronaldo did not complain and soon scored when Portugal earned its penalty. Midfielder Danilo was pushed and tripped trying to meet the ball from a corner. Ronaldo shot high to Marinovic's left as the goalkeeper dived right.

It was 2-0 four minutes later when Bernardo Silva slipped a shot into an unguarded goal after neat play on the left flank between Ricardo Queresma and Eliseu. Silva, the new Manchester City recruit, turned his right ankle while scoring and did not appear for the second half.

Russian fans in a 56,290 crowd made it clear who they came to see. They cheered when Ronaldo was on the big screens, even during Portugal's national anthem.

His loudest ovation was for applauding back to the crowd when substituted midway through the second half.

An inevitable third goal came in the 80th when Andre Silva dribbled deep into the New Zealand penalty area to score with a rising shot. Substitute Nani shot low past Marinovic in stoppage time.

Marinovic impressed and made eight saves, using his big body to block second-half shots by Andre Silva and Nani.

A typically robust New Zealand team was outclassed at times and extended its winless Confederations Cup run to 12 games across four editions.

However, it created chances to score, and captain Chris Wood was denied only by defender Bruno Alves blocking a low shot at the far post in the 59th. Defender Michael Boxall and substitute Kosta Barbarouses also went close.

New Zealand coach Anthony Hudson called it "an incredible sign of respect" to see the strong Portugal lineup on arriving at the stadium.

"I don't see why they cannot go on and win this tournament," the English coach said.

MELBOURNE, Jan22: Roger Federer reached the Australian Open quarter-finals for the 14th time on Monday but the defending champion did not... Read More...