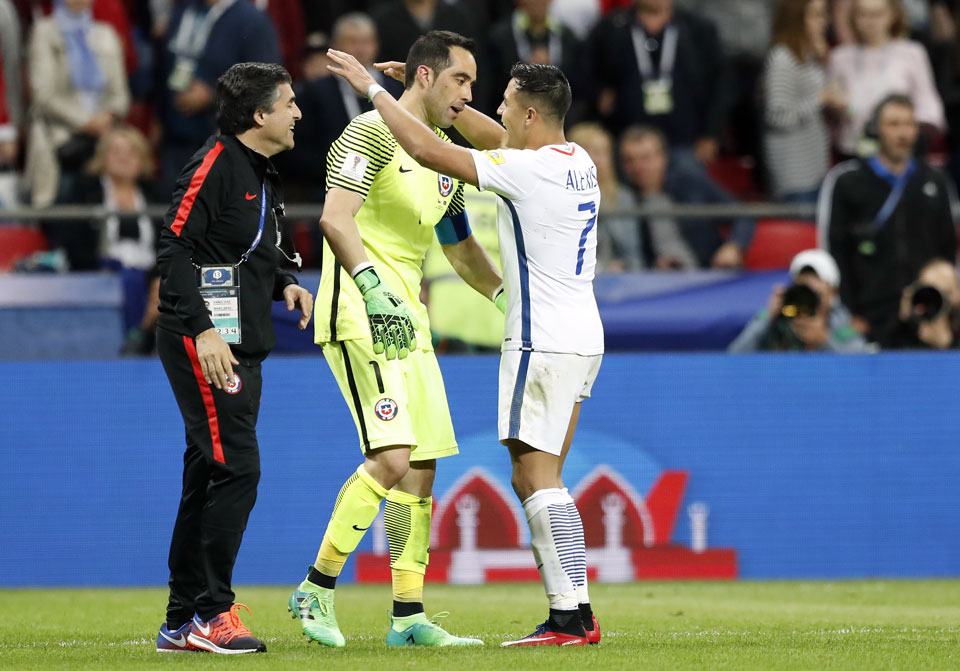 Chile's Alexis Sanchez, right, celebrates with Chile goalkeeper Claudio Bravo after winning a penalty shootout at the end of the Confederations Cup, semifinal match between Portugal and Chile, at the Kazan Arena, Russia on Wednesday. Photo: AP

Arturo Vidal, Charles Aranguiz and Alexis Sanchez all scored for Chile in the shootout.

The teams were drawing 0-0 after normal and extra time.

The result was justice for Chile, which had a strong penalty appeal turned down in extra time and then saw the ball hit the woodwork twice in the same move a few minutes later.

Chile and Portugal both came close in the first 10 minutes but there were few chances after that in a lackluster game between two of the main title favorites. Cristiano Ronaldo was off-form for Portugal and Chile gradually took control in front of 40,855 fans at Kazan Arena, most of them behind Chile.

Chile will play Germany or Mexico in Sunday's final in St. Petersburg. It will be seeking its first title outside of South America after winning the Copa America in 2015 and 2016, both times in penalty kick shoot-outs.

"I was injured and I didn't play at my normal pace, but I normally get things quietly," Bravo said. "This is very important to us because it's like completing a very successful cycle. We are very happy to be able to play in the final."

Portugal was looking for its second consecutive title after winning the European Championship last year.

In the shoot-out, Bravo dived to his right to stop weak penalty kicks by both Quaresma and Joao Moutinho, then switched sides to save Nani's timorous shot. Nani tip-toed desperately slowly to the ball looking for all the world as though he did not want to take the kick. And he patted it gently to Bravo.

"Claudio was amazing, the players who scored their penalties were amazing and I think we deserve to be in the final," Chile coach Juan Antonio Pizzi said. "We have made a huge effort and I think you could see it during the game."

Chile had its chances to win it in extra time when Vidal's powerful right-footed shot struck the far post. From the rebound, substitute Martin Rodriguez hit the crossbar with Portugal goalkeeper Rui Patricio already beaten.

Sanchez had already had a chance to break the deadlock six minutes into extra time, but his header from near the penalty spot went just wide after a well-placed cross by Mauricio Isla.

Chile wanted a late penalty when Francisco Silva was stepped on by a defender inside the area with only a few minutes left, but the referee let the play continue and it was not reviewed by video.

Ronaldo had some chances in regulation time but couldn't capitalize on them, including an 85th-minute header that went wide.

"I think it was an excellent game, a good propaganda for football, two excellent teams," Portugal coach Fernando Santos said. "They both showed they wanted to win."

KATHMANDU, Nov 8: Nepal suffered fourth and final straight defeat in the AFC U-19 Championship 2018 Qualifiers, as it went... Read More...