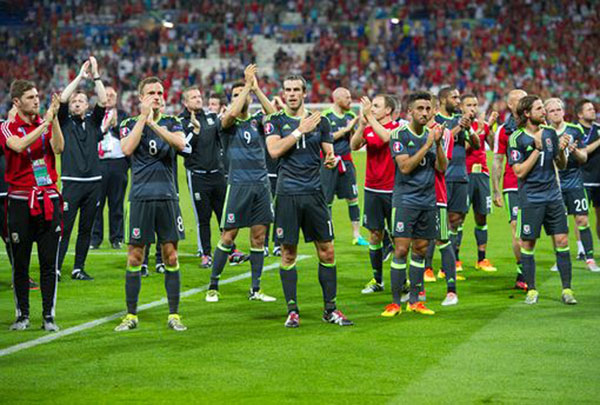 LYON, France, July 7: Cristiano Ronaldo had just propelled Portugal into another European Championship final when he made for Gareth Bale, shared a long conversation with his Real Madrid teammate and gave him a sympathetic hug.

The battle of the superstar forwards turned into a one-man show — and, as ever, it was Ronaldo taking center stage.

By thumping home a header and setting up strike partner Nani for the second goal, Ronaldo delivered two blows in three minutes to lead Portugal to a 2-0 win over Wales in the Euro 2016 semifinals on Wednesday.

Ronaldo — a serial winner in individual and team prizes in club football — will get another chance to win his first trophy on the international stage when Portugal meets either France or Germany in Sunday's final at the Stade de France.

"I've always said my dream was to win a trophy with Portugal," Ronaldo said. "We're closer to doing it and I believe that we'll win."

Portugal last competed in a final at Euro 2004, when the team surprisingly lost on home soil to Greece. A 19-year-old Ronaldo shed tears after that match, but he has managed to lead a much weaker side to another international showpiece.

"Portugal are not just about Cristiano Ronaldo, we are a team," Ronaldo said. "But I was able to score today and I've helped the team get to the final."

Ronaldo equaled France great Michel Platini's record of nine goals in European Championship football when he timed a prodigious leap to perfection and planted home a header in the 50th minute.

The three-time world player of the year then sent in a long-range shot that Nani, finding space in between defenders, diverted into the net on the slide from 10 meters.

Despite Bale's best efforts — again, he was his team's top performer — and a solid first-half display, Wales' unlikely run at only its second ever major tournament ended in the semifinals. The loss of midfielder Aaron Ramsey through suspension proved to be costly for the Welsh, and Bale couldn't do it all on his own.

This could have been the match where Bale, football's most expensive player, emerged from Ronaldo's shadow. That will have to wait.

"He is a natural goal-scorer and he scored yet again," Bale said of Ronaldo. "It's not about them, it's about us. We're disappointed but we'll pick ourselves up."

Competing in its first tournament since the 1958 World Cup, Wales — a rugby-mad nation of 3 million people — has been one of the most popular stories of Euro 2016, topping its group and then beating highly fancied Belgium in the quarterfinals.

But the Welsh had no response once Portugal forged ahead after its one-two punch. Portugalhadn't previously won a match in regulation 90 minutes in France, yet there would be no late drama here thanks to Ronaldo.

The owner of the best leap in world football, Ronaldo timed his jump perfectly and headed home left back Raphael Guerreiro's cross off a short-corner routine. Wales defender James Chester was blindsided by Ronaldo, who scored his third goal of the tournament — one less than France forward Antoine Griezmann.

It was telling that when they needed to chase the game, the Welsh could only throw on a striker from the third tier of English football — Simon Church.

There were a couple of half-chances for Wales late on, but Portugal could have doubled the margin of victory by the end, with Joao Mario hitting the post with one of the chances on the breakaway.

Portugal had lost five of its previous six semifinal matches in major tournaments.

After the final whistle, Wales headed over to applaud their fans, who didn't stop singing in the corner of the Stade de Lyon.

"I think we were a little tired tonight," Wales coach Chris Coleman said. "I can't say anything against our players. Everything they had in them they left out there. I can't say I'm disappointed with them, that'd be ludicrous."

"We had difficult moments," Ronaldo said, "but it's like I always say, it's better to start poorly and have a positive ending, The dream is still alive."

SAINT-DENIS, July 10 : France puts its formidable record in finals on the line when the European Championship hosts try to... Read More...

Madrasa education to be included in government curriculum
17 hours ago