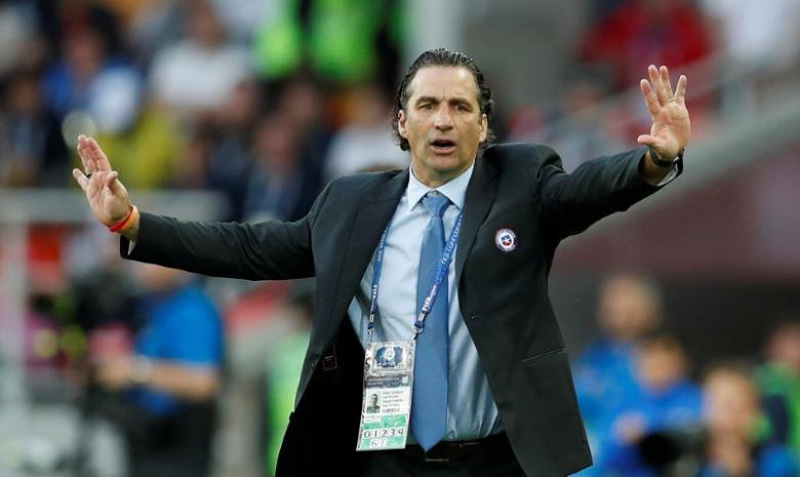 Chile coach Juan Antonio Pizzi will renew old acquaintances when his reigning two-times Copa America champions take on Portugal in what he expects to be a tough Confederations Cup semi-final on Wednesday.

Pizzi, who played under Portuguese coach Fernando Santos for FC Porto in 2000, will have a full 23-man squad to choose from for the clash in Kazan.

European champions Portugal's roster, meanwhile, has been depleted by injuries and bookings.

"We know it's going to be a difficult match," Pizzi told reporters at a press conference on Tuesday in Kazan. "And I'm sure it’s going to be difficult ...for Portugal as well."

"It a privilege and reason for satisfaction to have all of (the players)... tomorrow at our disposal. Let's hope they are able to play at the same level tomorrow as we've seen until now."

The Portuguese manager said a game-day decision would be made regarding midfielder Bernardo Silva, who sustained an ankle injury in his squad's last group stage match, a 4-0 win against New Zealand.

Center back Pepe would be sidelined after picking up his second yellow card of the tournament.

Portugal topped Group A with seven points from three games while Chile finished second in Group B with five.

Germany will face Mexico in the second semi-final on Thursday in Sochi.

KAZAN, June 19: Title contenders Portugal and Mexico fought out an entertaining 2-2 draw in the Confederations Cup on Sunday,... Read More...