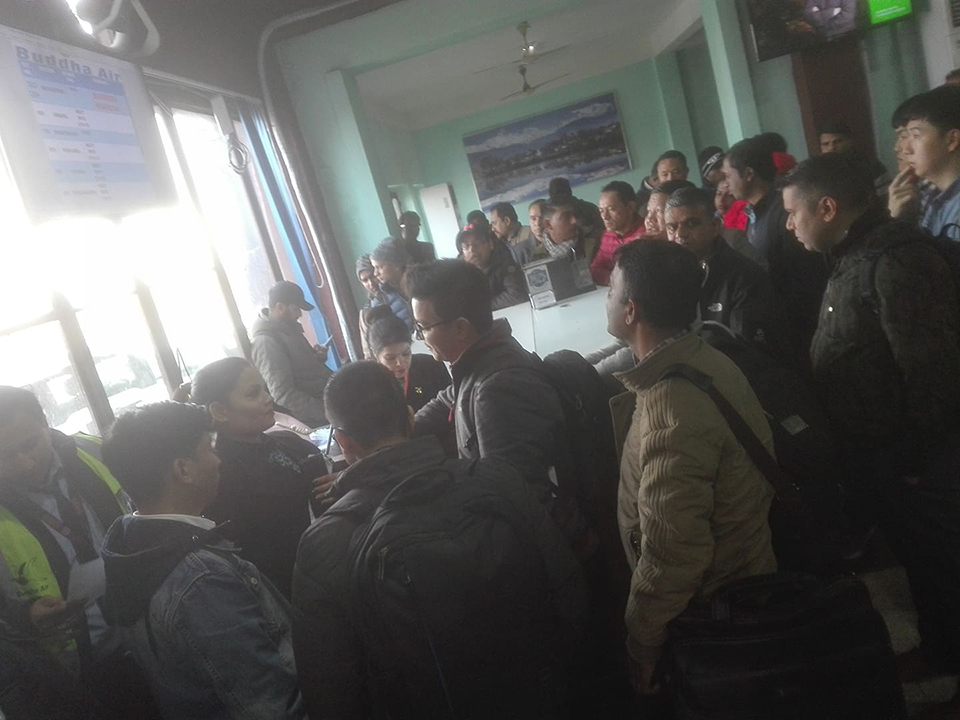 Passengers stranded up to five hours

KATHMANDU, Jan 13: Domestic airline passengers have been caught up in flight delays for hours in the last couple of days due to bad weather.

The domestic flights to and from airports in the tarai districts have been delayed for up to five hours, forcing huge crowds of passengers to languish at the domestic terminal here.

Passengers headed for the tarai via Tribhuvan International Airport (TIA) have been mostly affected.

Low visibility in Kathmandu due to bad weather has affected most of the domestic flights since Thursday.

Thick fog in the tarai delayed flights for Pokhara, Bharatpur, Janakpur, Bhadrapur and Simara on Friday and Saturday.

Buddha Air and Yeti Airlines had to cancel their mountain flights for the two days. According to Buddha Air officials, the last flight to Bhairahawa was canceled on Friday.

Flights to Pokhara (3:30 pm), Bharatpur (2:15 pm) and to Janakpur (3 pm) from the capital were canceled Saturday because of low visibility .

And except the first flight scheduled at 7 am, all the remaining flights on Saturday to the tarai destinations were delayed .

According to airline operators, after the first flight took off as scheduled at 7 am the domestic terminal at TIA was closed down due to bad weather . It reopened at 10:30 am. Talking with Republica, Anil Manandhar, corporate manager of Shree Airlines, said when one flight gets delayed, it ultimately affects other subsequent flights. Flights to Bhairahawa, Dhangadhi and Nepalgunj have been delayed on both Friday and Saturday.

Delays in domestic flights of up to five hours has prompted affected passengers to vent their ire on social media. They are posting photos of crowds of passengers lying on the floor at the airport .

After finally landing at TIA, she found a crowd of passengers waiting here and there at the airport due to delay,” she said adding, “Along with airfares, airlines should think about services for passengers during such situations. Not all passengers can lie waiting on the floor for five hours .”

Likewise, Bijaya Neupane, who was flying to Bharatpur from Kathmandu on Saturday, also had to wait over four hours to take off from TIA. “Our flight was scheduled at 11:45 am but it was delayed for four hours,” he told Republica. Meanwhile, journalist Matrika Poudel tweeted on Saturday afternoon that “Passengers have been stranded at TIA for up to six hours.”

Corporate Manager Manandhar of Shree Airlines, however, said, “Flights cannot operate in low visibility and for the last few days, thick fog in the tarai and cloudy weather in Kathmandu have affected visibility,” he said adding, operating planes with low visibility may cause accident. Delays in flights may continue for a couple of days more, airlines operators said.

Country to receive rainfall from Saturday to next three days: MFD

KATHMANDU, April 6: The weather on Saturday seems to be mostly cloudy throughout the country with rainfall, while there is... Read More...