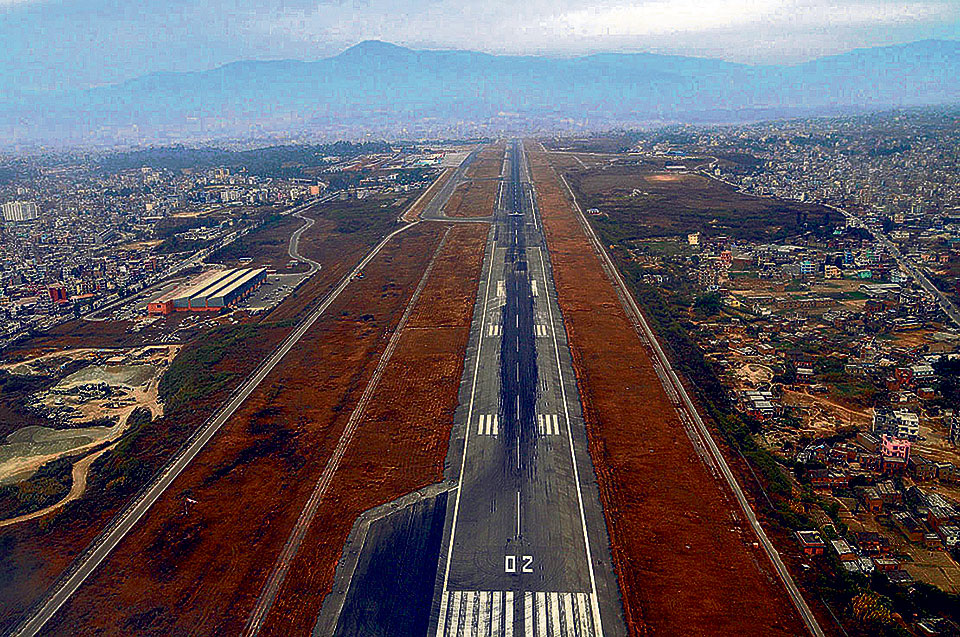 The rehabilitation work is expected to take two months as per the work schedule, according to Tribhuvan International Airport Civil Aviation Office (TIA CAO). This means the only international airport in the country will be operational between 8 am to 10 pm only for two months.

According to airport authorities, domestic flights and night flights of international airlines will be affected from airport closure. Most of the airlines, however, have already adjusted their flight schedules as per the new operational hours. Qatar Airways, China Southern Airways, Jet Air, Malaysian Air, Malindo Air and Turkish Air who used to operate flights after 10 pm have adjusted their flight schedule, according to TIA CAO.

The rehabilitation works include complete removal of the existing asphalt layer and putting in a new layer of asphalt. The first asphalt layer was put on the runway in 1975. Similarly, asphalt overlays were made in early 1990s.

The need for rehabilitation has been felt for the past many decades. However, airport authorities had been putting of rehabilitation plan by executing minor maintenance works when potholes and cracks were spotted on the runway.

Runway maintenance during peak expedition season is sure to affect tourism activities. Tourists heading to the Everest Region cannot fly to Lukla directly. The will have to take a flight to Manthali – the district headquarters of Ramechhap – and take flight the next day. Other option is to charter a helicopter to Lukla from Kathmandu which costs around US$ 2000 per flight.

Raj Kumar Chhetri, chief of TIA CAO, told Republica that the runway rehabilitation won’t affect flights much as most of the airlines have rescheduled their flights.

Domestic airlines operate around three dozen flights to different distance from 5 to 8 am. They have been forced to reschedule their flights. Tara Air, Yeti Airlines, Summit Air and Sita Air have already agreed to operate their Lukla flights from Manthali of Ramechhap.

Ghanashyam Acharya, the spokesperson for Airlines Operators Association of Nepal, said domestic carriers choose Manthali as the base for Lukla flights after realizing that it would be difficult to reschedule flights at Kathmandu airport.

Civil Aviation Authority of Nepal (CAAN) has been collecting Rs 1,000 per passenger from international airlines companies for runway rehabilitation works since 2014. CAAN has collected Rs 7 billion from the airlines so far.

As per the work plan, the Chinese firm will blacktop 80-100 meters each day. The asphalt layer will be 30 to 53 centimeters depth, according to airport authorities. They also added that the contractor is all set to begin rehabilitation works.

TIA CAO plans to make the airport operational round the clock after runway rehabilitation work is complete.

KATHMANDU, March 18: The number international flights to and from Tribhuvan International Airport (TIA) continue to decline with the issuance... Read More...

KATHMANDU, July 13: After an aircraft of Yeti Airlines skidded off the runway while landing at domestic terminal of Tribhuvan... Read More...

RSP meeting to continue today at 11 am
49 minutes ago