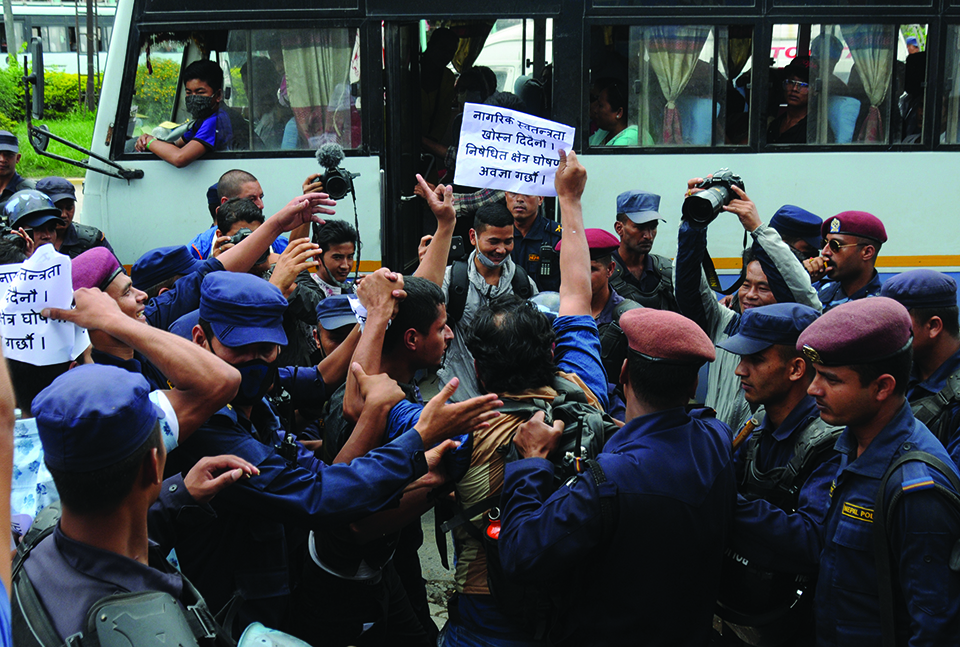 What is the need for the government to declare a no-go area for peaceful protests and prohibit spaces located at the heart of the city?

The recent decision of the government to declare certain zones as off-limits to protest has raised many eyebrows with some even suggesting that it is the beginning of the end of the liberal political order in Nepal established post-1990. While governments do try and exert their influence and project power in different forms especially by attempting to sideline criticisms, this particular decision has raised concern among people because of the majority nature of the government. This article delves on the contestation for urban space and its developments.

It is interesting to note that the major contention of K P Oli-led government has started in the urban space. Urban areas for variety of reasons are important sites for producing and contesting powers. All forms of intelligentsia and the power wielders tend to concentrate on the urban locations. This is also the very space which panders to the middle class—the category for whom majority of the policy decisions are made. However, increasing number of middle class also complements its rising aspirations and imaginations. For instance, the issue of reform in medical education raised by Dr Govinda KC draws large support from this very category. They see their hopes and that of their generations hinge on the reform agendas raised by Dr KC.

The middle class therefore throws its weight behind such initiatives. The Singha Durbar-based political elites would know it well that hurting the interest of this ever swelling category would directly affect their own political survival. The liberal political order of the post-1990 in Nepal accentuated the formation of this middle class and therefore, it considers this order as their own turf putting in every effort to secure it.

A look at the trajectories of the parties in power suggests that they too have used and benefitted from this order in different ways. In fact, the erstwhile CPN-UML ensured that its support base increased exponentially in the urban set up by mobilizing different professional groups. The other partner, Maoist party led by Pushpa Kamal Dahal, cried foul from this urban space and claimed that this was no place for the ‘proletariat’ and made successful efforts in inducting those that came to urban locations as footloose laborers. In fact, both the parties in recent histories have made use of the protest citing it as a democratic exercise, though they were not peaceful all the time. So, what is the need for the government to declare a no-go area for seemingly peaceful protests and prohibit those spaces located at the heart of the city?

One of the possible answers could be the fear on the part of the ruling elites led by both politicians and bureaucrats who see the new entrants to the burgeoning middle class as potential challengers to status quo. Also, the ‘anti-intellectual’ bias in the power wielders demonstrated best by the prime minister who routinely mocks questioning intellectuals is also symptomatic of the two-line struggle emanating from the elites of the new political dispensation.

On the one hand all the dreams floated by the incumbent government are projected in the name of the middle class—whether it is about running a high speed train across Nepal connecting with its immediate neighbors or having a fast track(akin to freeways of the West). But the traditional middle class somehow doesn’t fit in to this category of Oli’s imagination. It is rather the new middle class which has built itself from scratch and doesn’t carry any traditional social and cultural capital that Oli is communicating with and is getting responses from.

The urban middle class aspirations, however, are also divided along party lines. This association is based on the party affiliation with the professions they belong to. However, a parallel process also operates which seeks to protect respective members’ interest if it is about sharing the pie with little consideration for party affiliations.

The other important dynamics of this urban centric mobilization is the creation of defense mechanisms. In fact, every major change from 1950 onwards has created its own defense mechanism and that largely revolves around the urbanities. These would mainly include salaried professionals who would largely benefit from the new dispensation.  In this very tradition the change of 2006 has also its own vanguard. Therefore, the contestation of the Oli-government is likely to be with this very defense mechanism.  Howsoever the government wishes to do away with the urban critic, they will come back to haunt it as it is in the former’s turf that government is trying to encroach upon.  One should not be surprised if tomorrow this government is replaced and its members start contesting from the same space which they now have declared as ‘prohibited zone’ for the peaceful protestors.