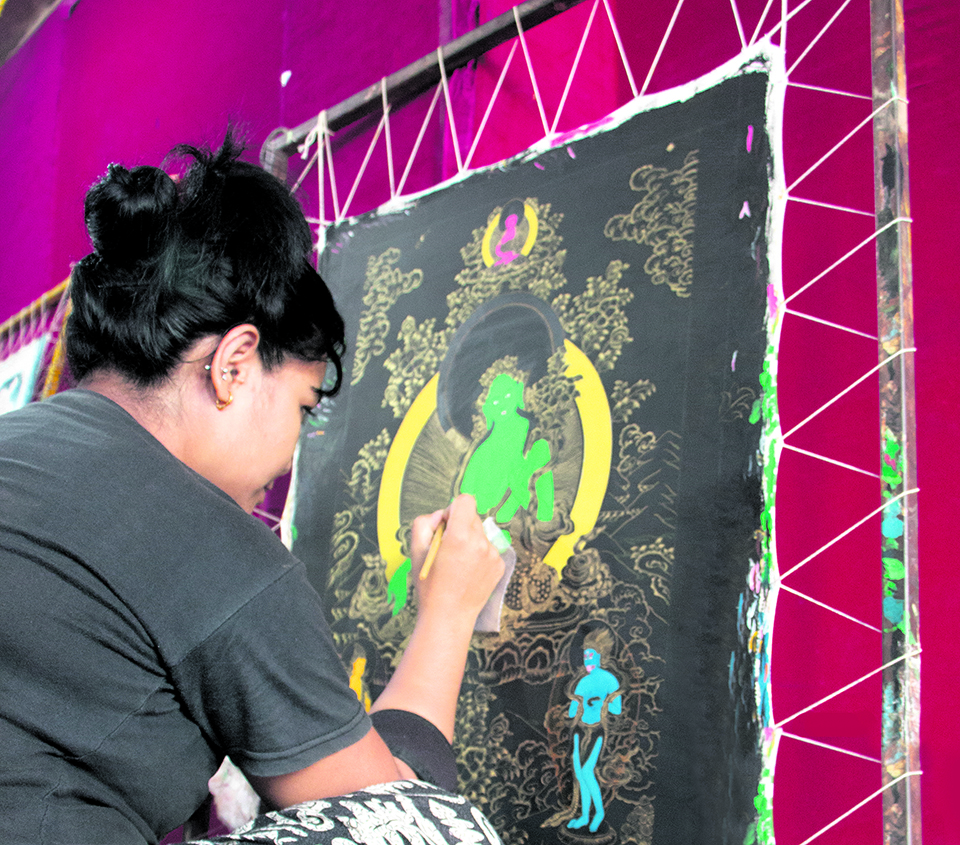 “Thang” meaning cotton and “ka” meaning images together make up the Tibetan word “thangka” which literally translates to images made on cotton. Thangka paintings’ origin can be traced back to nearly 2500 years ago. A visual representation of Buddha’s teachings, thangka paintings originally served as personal meditation tools for monastics and students. They are often interpreted as intricately done pieces of art by the common folk but to those who devote their entire lives to making them, they are a representation of their faith, spirituality, and perseverance.

For 35 years, Hom Bahadur Tamang has made and taught the art of thangka. Ever since he learnt thangka painting from his brother at the age of 11, he has devoted his entire life to making it and teaching others to make it. A master thangka painter, he is the founder of Sara Enterprises where he runs a thangka art school and negotiates the buying and selling of thangka paintings so that the artists get their work’s due.

Sara Enterprises, named after Tamang’s daughter, Sara, has been up and running for 26 years now. Located right inside Boudha’s gate, Sara Enterprise almost blends in with the many Tibetan-Buddhist themed shops that sell similar thangka paintings and brass wares. But because of the sheer number of thangka artists it has produced and continues to do so, it enjoys a special place in the area.

“Originally Sara Enterprises was started as a way to give artists a fair share from their work’s proceeds. Dealers often get a bigger share of the sales proceeds than the artists themselves. It happens today as well but it was worse back then,” says Sara who helps her father manage the store/school. So, she says, her father took it upon himself to be in charge of the buying and selling of thangka paintings. Eventually he recruited youths of his village in Ramechhap, brought them to his outlet in Boudha, and trained them for years in the art.

“I only hoped for these young people to be able to earn their livelihood. You can be a thangka painter even if you don’t have any formal education,” says Tamang. Soon enough SLC graduates and city hopefuls who came to Kathmandu with big dreams flocked to his store wanting to learn from him. So he opened a school (right above his store) where anyone could come to him to learn free of cost.

For those who showed great promise, he offered them work and a basic salary. They could continue to learn under him and get paid in return. Some artists who began with Tamang still work at Sara Enterprises, even 25 years later. Some are masters now and have even started teaching other enthusiasts. Some are acclaimed thangka painters who have opened studios of their own. Some have long retired, owing to their deteriorating eyesight after which painting thangkas became impossible.

Sara Enterprises is very much the same today as it was 26 years ago. To anyone who is interested, a basic three months course is available. Canvases and colors are provided by the company itself. Once they clear their basic course, they can move up to an intermediate course. “Since this work requires patience and concentration for long time periods, people don’t wish to continue so we lose quite a number of students here,” explains Sara. Intermediate level is also where people start getting paid. And anyone wishing to take it higher can take it to the master’s level, although it is quite rare for students to do so because it takes an average of six years to become a thangka master.

Eventually, people decide on what they would like to specialize in – figures, mandalas, bodhisattvas or the wheel of life. Currently there are 35 students and five teachers. And Tamang estimates that some 2000 students have passed through their establishment till date.

Tamang is still adamant on the idea that learning should be free so most of their students take the courses free of cost. However, those who can afford it are encouraged to pay. “This way our art school can sustain itself,” he explains. People learning with them are thus from all walks of life – students sent by their parents during long school vacations, people working as manual laborers, and even foreign visitors who were fascinated by thangka and decide to learn on a whim.

“We’ve also seen a lot of people who were looking into foreign employment come to us and learn. Some decided to stay with us and we’re glad they did,” says Sara. Paintings made by the students are also sold after slight touch ups. The paintings, however, greatly vary in their appraisals as compared to those made by the masters. Another cause for difference in appraisals is the color used in the paintings. Students use chemically processed colors whereas the masters use stone colors that have to be specially harvested and are increasingly becoming rare.

The masters also use melted 24k gold in the linings of their paintings. A single thangka painting can take months to finish and students and masters alike paint for over eight hours every day, seven days a week.

Besides their own art school, Sara Enterprises also offers demonstrations of their paintings and other crafts to visitors. One-hour workshops on basic mandala designs are conducted for anyone interested. Additionally, they conduct open healing bowl therapies in an attempt to make people aware about this age-old healing technique that relieves both the body and the mind.

“We want people to know about healing bowls and use them for their well being. Sometimes we notice that foreigners are more aware about these things than Nepalis themselves. We’re hoping to change that,” explains Sara. She also mentions that buying a painting at Sara Enterprises isn’t merely an exchange of goods. They want to make sure that their paintings are going to homes that understand and value their meanings. “So we always spend some time explaining the significance of each painting we sell. They aren’t just aesthetic pieces to hang on the wall, they mean much more and it’s essential that our buyers understand that,” she adds.

The only concern that is plaguing Tamang is that fewer and fewer people seem to be seriously invested in thangka painting in the recent days. “As compared to previous years, fewer people are becoming masters and that’s worrisome,” he says. Fewer masters mean fewer refined thangkas and also fewer students. “All the same, we’re doing our bit in promoting and spreading the word. People are returning to their roots these days, we hope they return to us as well,” he concludes.

Kishor Jyoti is an artist based in Kathmandu, Nepal. Jyoti, also known as Young Flame Artist, describes his style as... Read More...

From the day she fully learned to grasp her pencil well, Aakriti Kharel started drawing. She started with circles and... Read More...

Govt decides to reduce tax on petroleum products
6 minutes ago