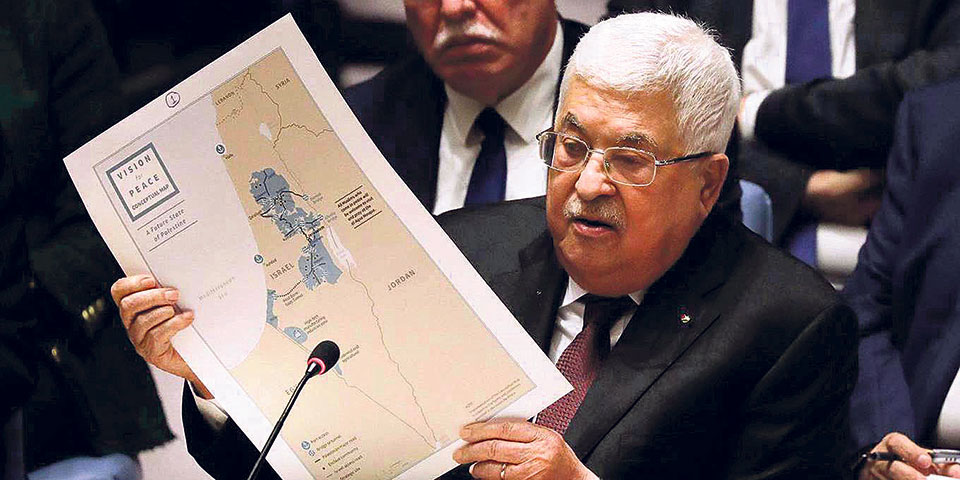 The Trump administration’s Israel-Palestine peace plan has undermined the belief that internationally agreed principles, such as the need to adhere to the pre-1967 borders, are unassailable

TEL AVIV – Nobody should be surprised that US President Donald Trump’s Middle East peace proposal is heavily tilted toward the Israelis. What is surprising is that, rather than rejecting Trump’s proposal, the world has left the Palestinians largely on their own.

While dismissing the Palestinians’ national yearnings with the patronizing promise to “improve their lives,” the Trump peace plan embraces Israel’s national narrative that it alone has valid historical claims to Judea and Samaria, the Jews’ biblical homeland. So, while it would give the Palestinians their own state, it would be a fragmented territory covering Gaza and 70 percent of a West Bank dotted with Israeli settlements and surrounded on all sides by Israeli-annexed territory. Its capital would be located in a suburb of East Jerusalem, which would remain Israel’s undivided capital.

The plan ignores Palestinian demands for the right of return to homes left when Israel was established in 1948—a right that was recognized at the time by United Nations General Assembly Resolution 194. Moreover, in line with Israel’s far-right ethnocratic ambitions, the border would be drawn in a way that strips 300,000 Israeli Arabs of their citizenship, making them citizens of the Palestinian state.

The Palestinian territories would be connected by a maze of tunnels and bridges, and much like the Bantustans of apartheid South Africa, they would be subject to overwhelming Israeli military control. Anyone entering the new Palestine—by air, sea, or land—would have to go through Israel.

Meanwhile, Palestinians would be prohibited from creating their own armed forces or engaging in any activities “that adversely affect the State of Israel’s security”—as determined by Israel’s government. Likewise, the Palestinians would have to earn the right to this sham state by disarming Hamas and proving—not to any international body, but to Israel and the United States—that they have created a democratic system governed by the rule of law.

In presenting such a deeply unfair plan, Trump has destroyed any credibility that the US may have still had as an honest mediator. Moreover, he has undermined the belief—crucial for progress toward a fair deal—that internationally agreed principles of the Israeli-Palestinian peace process, from the need to adhere to the pre-1967 borders to the illegality of Israeli settlements, are unassailable.

Given how willing the rest of the world seems to be to abandon the Palestinians, these losses will not be easy to reverse, even if Trump loses the November presidential election and his successor abandons the plan, as candidates like Bernie Sanders and Elizabeth Warren seem prepared to do. The fact that anyone is taking Trump’s skewed plan seriously is a testament, first and foremost, to the radical transformation that the Middle East has undergone in recent years. Solidarity with the Palestinians used to be the glue that held together an otherwise fragmented Arab world; now, their plight is a nuisance, a burden, and above all an obstacle to rapprochement with Israel.

Yes, the Arab League repudiated the US plan at a meeting of its foreign ministers in Cairo. But the truth, as Lebanon’s Hezbollah movement put it, is that Trump’s “deal of shame” would not have happened without the “complicity and betrayal” of several Arab states.

The ambassadors of Bahrain, Oman, and the United Arab Emirates participated in the White House unveiling ceremony, implying these countries’ approval. Moreover, despite “renewing its assertion” of support for the Palestinian people, Saudi Arabia noted that it “values the efforts” of the Trump administration in “developing a comprehensive peace deal between the Israeli and Palestinian sides.” Given Trump’s apparent loyalty to Saudi Arabia—based, not least, on lucrative arms deals—the Kingdom’s crown prince, Mohammed bin Salman, was probably privy to the plan’s contents before it was released.

In Jordan, King Abdullah initially warned that Israel’s annexation of the Jordan Valley would have serious security consequences. But he subsequently advised other countries to “look at the glass half full.” Judging by its ambiguous attitude toward Palestinian statehood, one must wonder whether Jordan would prefer having as its neighbor Israel, with which it has historically colluded to rein in Palestinian aspirations, rather than a Palestinian state.

Similarly, Egypt’s foreign ministry called upon both sides “to carefully consider” the peace plan, and even claimed that creating an independent and sovereign state in the occupied territories would restore all the “legitimate rights” of Palestinians. And though Tunisia’s president condemned the peace plan as “the injustice of the century,” the country’s ambassador to the UN was soon sacked for leading the challenge against it in the Security Council.

But it is not only the Arab world that is letting down the Palestinians. The European Union’s high representative for foreign affairs and security policy, Josep Borrell, strongly condemned the plan. But his unilateral statement was needed precisely because some EU countries – including the Czech Republic, Hungary, and Italy—blocked a shared resolution. France, for its part, gave the plan a cautious welcome.

Beyond the EU, the United Kingdom’s government hailed the Trump peace plan as “a serious proposal” and “a positive step forward.” And despite officially condemning the plan for “contradicting UN resolutions,” Russia stands to gain from what a Moscow Times editorial called the “unilaterally imposed humiliating terms” of the deal. This “provides a precedent for major powers dictating terms to weaker ones” and vindicates Russia’s occupation of Crimea, “Russia’s West Bank.” In fact, “limited sovereignty” was exactly what the Kremlin wanted to give the former Soviet republics.

If, with the probable connivance of the Trump administration, Israel annexes its West Bank settlements, the paradigm shift in the Israeli-Palestinian peace process would be complete. Israel’s status as an apartheid state would be officially confirmed. And the Palestinians will face a stark choice: submit or struggle. If they choose the latter, it had better be a diplomatic struggle: a third Intifada would be calamitous for their cause. Boycotting America, still an indispensable power for an equitable regional solution, proved to be a wrongheaded Palestinian policy.

NEW DELHI – “Great nations do not fight endless wars,” US President Donald Trump declared in his 2019 State of... Read More...