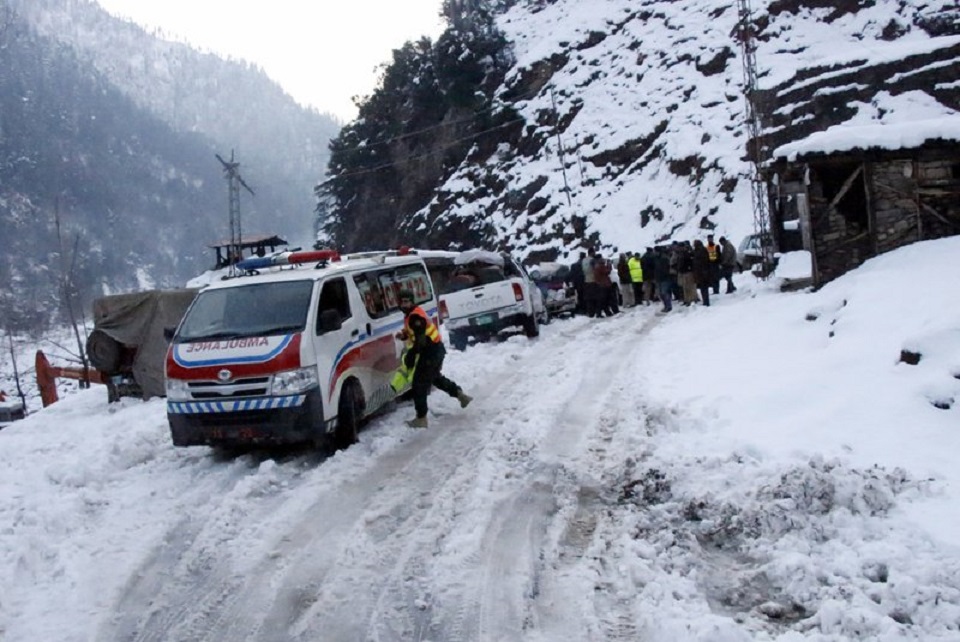 An ambulance heading to an area hit by avalanches, waits for a blocked road to be opened, in Keran, a small town in Neelum Valley, Pakistan-administered Kashmir, Tuesday, Jan. 14, 2020. Severe winter weather has claimed more lives as avalanches triggered by heavy snowfall killed more than 50 people in Pakistan-administered Kashmir while a dozen died in neighboring Afghanistan, officials said Tuesday. (AP Photo/M.D. Mughal)

MUZAFFARABAD, Pakistan, Jan 15: Search teams aided by Pakistani troops pulled out 21 more bodies from homes destroyed by this week’s avalanches in the disputed Himalayan region of Kashmir, raising the overall death toll due to severe winter weather to 160 for Pakistan and Afghanistan, officials said Wednesday.

Rescuers were racing against time to reach scores of people believed still to be trapped inside their homes, buried under avalanches triggered by heavy snowfall in Pakistan-administered Kashmir. With many roads still blocked by snow, authorities were using helicopters to evacuate those injured.

The worst affected area was Kashmir’s Neelum Valley, where the 21 bodies were retrieved, said Ahmad Raza Qadri, a minister for disaster management. He said that since Sunday, 76 people have been killed in Pakistan-administered Kashmir in weather-related incidents. Another 45 people were killed in Pakistan’s southwestern Baluchistan and eastern Punjab provinces.

Avalanches are common in Kashmir, which is divided between Pakistan and India and claimed by both in its entirety.

Pakistani Prime Minister Imran Khan flew to Kashmir on Wednesday to visit the avalanche-hit areas. He visited a military hospital in Muzaffarabad, the capital of Pakistan-administered Kashmir, where several people, including women and children, were being treated after being rescued from Neelum Valley and elsewhere.

In Afghanistan, the situation was returning to normal on Wednesday, following days-long heavy snowfall, rains and flash floods that killed 39 people and damaged about 300 homes there since Sunday.

Two incidents of the past week in Nepal are deeply worrying for the prospects of tourism at a time when... Read More...