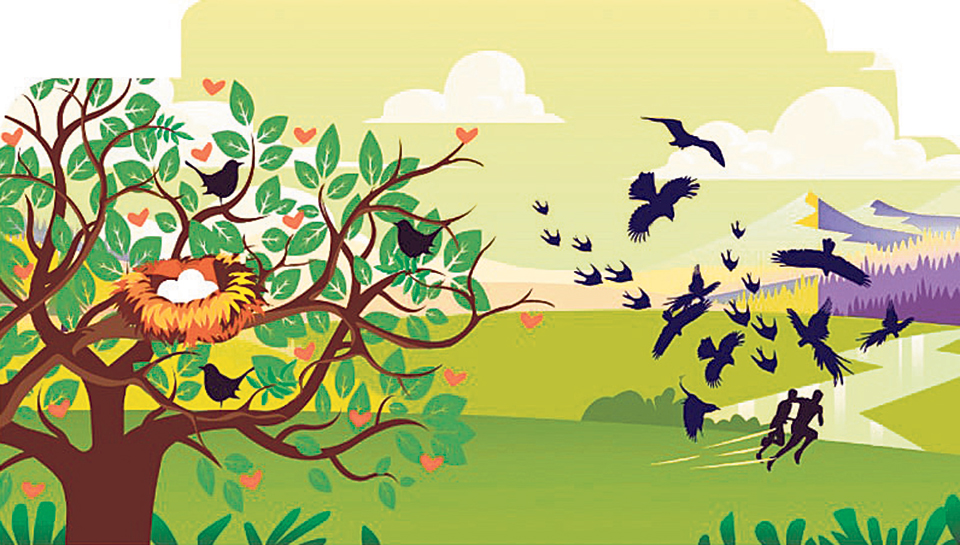 Nepal’s media houses should build a consensus on how to respond to, address, balance or even resist (if necessary) the competing interests of major powers like China, America and India

A statement issued by Chinese embassy in Nepal on February 18 over an article published by The Kathmandu Post sent Nepali media persons and social media population in reaction mode: China has no business telling what a Nepali newspaper can and cannot publish. Chinese embassy has breached the diplomatic decorum. Nepal government should raise this matter with China.

Some directly commented under Twitter wall of Chinese ambassador to Nepal, Hou Yanqi: Madam, Nepal is a democracy with complete press freedom, bear this in mind.

The cause of uproar was the article by Ivo Daalder, former US ambassador to NATO, first published in Chicago Tribune on February 13, wherefrom The Korea Herald reprinted it on February 17, wherefrom The Kathmandu Post reprinted in on February 18—twice removed from the source, so to say.  Neither Chicago Tribune nor The Korea Herald had used the picture of Mao in mask against 100 Yuan bill, apparently the main source of fury for embassy officials in Kathmandu. It may have been understood as an act of mocking and insulting the country in a terrible suffering.

Newsroom is not always an error-free zone. The person who uploaded the article and the picture may have thought there will be nothing objectionable about it, for neither the article nor the picture belongs to the Post and both have been duly credited.  It could have been a case of oversight by the person in charge of desk. We don’t know.

But the Chinese gave the message of being deeply hurt. Instead of sympathizing, empathizing and expressing solidarity with China at this moment of tragedy, the media are presenting China in negative light, they told us. Chinese embassy claimed that the picture has been published with “malicious intention” to deliberately smear “the efforts of the Chinese government and people fighting against the new coronavirus pneumonia” and “viciously attack political system of China.” It mentioned the name of the editor and accused that he “has always been biased on China-related issues.” The editor mentioned in his Tweet that the Chinese had been “complaining with management repeatedly about The Post’s journalism.”

The Ivo Daalder article and the picture that went with it seem to have tipped the point of escalation of grievances.

We’re being watched
Foreign missions in Kathmandu watch the Nepali press—English medium press even more—carefully, closely and between the lines, especially if the contents published are related with their countries. They may judge some of the contents as objectionable.  But they usually do not react by issuing the statement but by writing rebuttal in the respective media outlet, or elsewhere if the respective media outlet does not entertain it.

I remember a couple of incidents. Once this daily had run a report regarding Senkaku Islands, which both China and Japan lay claim on, from the international source. Japanese embassy in Kathmandu wrote a letter to the editor to rebut the claim made there in. It was published.

What led the Chinese embassy in Kathmandu to issue the statement—feeling of hurt at the time of national tragedy or perception of bias—we don’t know. But this episode should be the occasion for Nepal to discuss media’s role in handling sensitive foreign affairs issues.

Question of projection
Imagine this. Nepali press writes about China like Ivo Daalder wrote for The Chicago Tribune. Or imagine the reverse situation. Nepali press will go gaga about China and starts attacking core concerns of the US and India. Or Nepali media outlets will be visibly divided into pro-China and pro-America or anti-China and anti-America camps.  What will happen is predictable.

Nepali media, private media of course, has a great responsibility at times of shifting geopolitical balance, and great geopolitical game playing out between the world’s two largest powers.  It is pertinent to raise debate on what role media should play during such sensitive times and how it should fulfill this responsibility.

Nepali media has remained the vocal critic of the government, usually irrespective of which party is in power. But where does it stand when the interests of geopolitical rivals directly diverge?

Most mainstream media outlets have taken clear position on America’s Millennium Challenge Corporation (MCC) grants and they have recommended that the agreement should be endorsed by the parliament.  They have also maintained clear position on China’s Belt and Road Initiative (BRI): Nepal needs economic assistance from both China and the US, Nepal should be able to benefit from both BRI and MCC. But this narrative can be altered if the media so wishes. We define MCC as the American design to militarize the country so as to launch attacks against China from Nepal (some online outlets are doing this anyway).   And BRI, just imagine, we call China’s debt trap diplomacy and raise the fear that every bit of assistance coming from China is loaded with ulterior motive of entrapping Nepal in debt.

We might push the country to the point where neither China nor the US will be willing to offer development assistance.

Failing Nepal
Mostly media houses carefully safeguard larger interest of their nations. The New York Times, for example, is probably the harshest critic of president Trump but their larger worry seems to be with the way the president through his actions is contributing to erosion of American influence worldwide.

In India, when the government formally stripped the autonomy of Jammu and Kashmir in October, 2019, Indian media did not object to the government decision. India included Nepali lands of Kalapani in its official map. No Indian paper wrote against it.

In China, by virtue of its political system, the media defends the state.

Our recent history is not encouraging. Nepali media has failed to stand united during the times of adversity.  In 2015, the country was in throes of constitution writing. India appeared as an interfering actor. Nepal was a divided house in terms of whether to stand against or in favor of constitution writing process. The press was clearly divided.

Some big media and influential journalists (conscientious readers may know who) stood for and advocated in favor of postponing the constitution process. Constitution was passed and the blockade followed. Some of the outlets failed to even call the blockade by its name for many months. There was no media solidarity.

Instead, Nepali media became the vehicles to spread the narratives of divide. The outsiders found the excuse to say it serves Nepal right.

Nepali media houses and their leaders could have done much more and much earlier to help deescalate the tensions in Tarai plains.  Together, they could have cleared some of the lies and misinformation about Nepal’s constitution, refrained from reviling nationalism and nationalists, and helped Nepal and India to return to normal ties.

On February 21, senior journalist Yubaraj Ghimire wrote a strong critic on tendencies of foreign missions to dictate terms on Nepali media and the tendencies of media leaders not to speak out against it. Ghimire cited two examples—one related to Indian embassy and other American embassy—of how the missions react when they feel that things are not being reported the way they would like to. He argued that Nepali press made a mistake in not denouncing foreign interference in Nepali politics that started from the 12-point agreement.  Incidentally, none of the editors (except Anup Kaphle) who showed solidarity against Chinese statement shared this piece on their wall.

Set the redline
Nepali media often have a lot of recommendations on domestic issues. We, the commentators, often complain that Nepali political leaders and the political parties have failed to build consensus on how to deal with big powers. We have complained that our foreign policy changes along with the change in the government. But have we asked the same question to the media? How will Nepali media respond when pressures mount from three sides—China, India and the US— to secure their strategic interests which, as we have seen most of the times, are incompatible and mutually exclusive as well?

Nepal’s media houses should stand together and build a consensus on how to respond to, balance, address, or even resist (if necessary) the competing interests of major powers like China, America and India. But this will be possible only when they agree to build such a consensus in the first place. This won’t be possible as long as how to view China, the US and India is subject to which particular person is the leader of the newsroom.

I would suggest that Foreign Ministry should convene a meeting with leaders and owners of Nepali press and agree on some of the basics: Nepali media will not hurt the sensibilities of neighbors and friends but will resist when Nepal’s sensibilities are hurt. They will provide critical feedback to the government on foreign policy and on foreign policy the press, the government and civil society will stand together.

Here is something owners and leaders of Nepali press need to keep in mind: Media watches people, politics and international affairs and report them. People watch how fairly the media is doing that job.

Our politicians rarely care about diplomatic protocol. They are always ready to meet any foreign guests and speak about foreign policy... Read More...

Jazeera Airways announces launch of service to GBIA
42 minutes ago