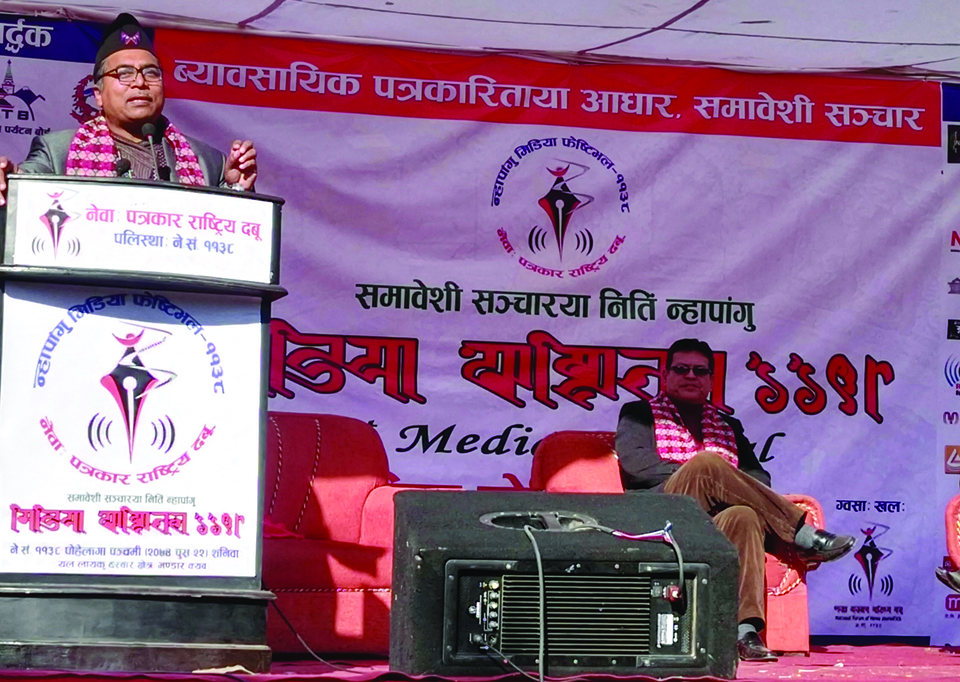 Once Maoists have been confined in the hills, Madhesbadis too were of little use for protectors and promoters of Indian interests.

In addition to holding views of political prejudice, cultural xenophobia, ethnonational jingoism and economic protectionism, alt-right is also an attitude of moral superiority that comes from the belief that the campaigner has had enough and is now determined to fight back. If the Trumpards in USA, the Brexiters of England and the Indian Bhakts of wherever they are have anything in common, it’s their holier-than-thou outlook of having stronger convictions about what they consider to be right.

Nepalis, including overseas ones, have a similar breed—the Oliers. Pronounced as ‘O Liars’, composition of this group is similar to those of alt-right everywhere: Hate-filled, half-educated nationalists and supremacists who believe that inclusion is diluting their dominant identity. Trumpards harvested the fear of immigrants. Brexiters are wallowing in their particular English peculiarities. The Bhakts continue to benefit from the paranoia of Hindus that an assertive Islam may once again overwhelm them in their ancestral land.
The Oliars of Nepal spread the dread that if the constitutionally created category of Khas-Arya ethnicity didn’t stand together, the specter of having a Madhesi head of state and a Janjati army chief will be repeated again. That frightens alt-right conscience keepers of the Khas-Arya nation into crossing the boundary lines of their political parties and banding together in the defense of the abhorrent ideology of hate and hostility that the presumptive Prime Minister Khadga Prasad Sharma Oli espouses without any compunction.

Sensing the HAMNS (Hindu, Aryan, Male and Nepali Speaker) angst following the fall of the First Constituent Assembly, the PEON promptly dumped its agenda of Hindutva and restoration of the monarchy and replaced them with the promotion of cultural conservatism. That way, it has managed to bring in beef-eating Bahuns of Fullbright scholars, half-bright Humphrey fellows and quarter-bright beneficiaries of USIS programs to its side.

The fellow-travelers of alt-right are not Oliological (neither logical nor illogical but purely prejudiced against Madhesis) by conviction, but see its merit in maintaining social prestige in the chauvinistic circles. After all, obtaining the adulation of the masses is the highest ambition of most intellectuals. Pandering to prevalent prejudices is a small price to pay for belonging to an ethnicity claiming cultural purity and national superiority.

It has already been over a dozen years, but the memory of gag rules of royal-military era still lingers. When the more prominent voices of dissent went suddenly silent after the February First takeover in 2005, it became clear that speaking truth to power in Nepal was indeed hard. Speaking truth to money is even harder. While stories about petty corruption proliferate, so very little appears in the media exposing profiteering of education, health and transport businesses.

Operations of cartels and syndicates that rule the roost through oligopolies in almost every sector of business and industry go unscrutinized. The Nepal Army is an organized business, but it has come under criticism only recently. Come to think of it, even media moguls have a common platform to lobby for their interests! The control mindset is indeed infectious.

If speaking truth to power is hard and showing the mirror to money is harder, telling truth to the conscience keepers of the nation is the hardest task of all in most in insecure societies. Little wonder, the media and the civil society—or whatever exists in their name in Nepal—are bristling with Oliars dispensing their chauvinist wisdom unchallenged.
It’s difficult to put a date upon something as insidious as an alt-right uprising. It is believed that a completely unrelated Scottish independence referendum of 2014 fanned the fire of fear among Brexiters. The second half-black presidency seeded the ground for the emergence of Trumpards. The Bhakts were born out of failures of Manmohan Singh government in controlling terrorism.

The Oliars of Nepal can trace their origin to the anti-Maoist rally of White Shirts in early-May, 2010. Perhaps that was the event that made Pushpa Kamal Dahal—back then, he was still known as Prachanda and his alter ego Baburam Bhattarai hadn’t yet become ashamed of his nom de guerre Laldwoj—realized that he had lost the propaganda war. An astute observer of political trends, Dahal knew that he could neither practice peaceful politics nor go back to armed insurgency after losing the faith of the nationalist pundits.

Even a warrior as adventurous as Prithvi is said to have relied more upon the advice of Gorkhali bards, balladeers and royal preceptors than his own field commanders. Ever since 2010, Dahal has remained in politics with a defeated mindset. Little wonder, former Maoist combatants appear like political orphans. When commanders surrender, soldiers have to lower their eyes, bow their heads, lay their arms and march out into the oblivion in complete silence.
Geopolitics is an important factor in the internal contestations of most geo-strategically located countries and Nepal is no exception. Perhaps it’s true that Indians wanted to wash their hands off the Maoists once their utility in ousting the monarchy was over. Once Maoists have been confined in the hills, Madhesbadis too were of little use for protectors and promoters of Indian interests.

The White Shirts emerged as new pawns on the geopolitical chessboard, which helped the PEON dispense with the First Constituent Assembly through creeping coup by law courts and remove all challenges to its hegemony forever. The Second Constituent Assembly was meant for the restoration of the old Gorkhali order minus the monarchy. The Gorkha Earthquakes came as a godsend opportunity for the PEON to reclaim its primacy.

When the 16-Point Conspiracy was being drafted, it was still possible to check the full-fledged emergence of alt-right. However, the PEON used the oldest and its most trusted trick from the book of realpolitik to incapacitate all opposition: Fan fears of Indian interference in the internal affairs of the independent and sovereign nation of proud Gorkhalis.

Ambassador Maharajkumar Rasgotra writes from his diplomatic experience of the 1950s: “What India had not anticipated or suspected was that anti-India criticism would be inspired and encouraged by a weak Nepal government to divert the blame for its failures.” The weapon remains almost as effective as the China Card in the arsenal of the PEON in Kathmandu.

The conscience keepers of the media and the civil society had begun to drift rightwards since the White Shirt rally in May, 2010; by the 16-Point Conspiracy of 2015, they had become complete conformists eating out of the hands of entrenched regime. Should the ethnonationalist regime of Oliars decide to go after what President Donald Trump calls the ‘Fake News’ enterprises, the conscientious class of Kathmandu will have nobody to blame but itself.

Due to oligopoly in the media industry, promulgation of an outright gag rule analogous to the royal-military regime’s antics is unlikely. Outright censorship can cause an outcry, hence alt-right regimes plant propaganda through carefully selected leaks and social media outbursts, which then de-legitimizes authentic information by drowning out all criticism. The Oliological media has learned that playing the regime’s tune pays.
Journalism of conformity also involves zero legwork and very little analytical effort. All information is pre-selected and supplied on demand. The only thing the bevy of reporters is then required to do is provide an angle to qualify as proper stenographers of power. According to the agenda-setting function theory of the media, the process of selection, omission and framing may not be able to tell the audience what to think but it can tell them what to think about. Complicity with entrenched elite is an inescapable component of the strategy.

Under censorship, fear of prosecution keeps practitioners of journalism online, but the courageous can still break the rule and bravely face the ruler. The problem with social sanction is that neither the crime nor its consequences are clearly defined.

Nationalists are dangerous breed. When dogmatic, they invite catastrophe. Mostly they use their credentials to make sleazy deals. King Mahendra bartered away Kalapani and Sagarmatha to obtain support for his family rule. King Birendra institutionalized corruption to create post-facto legitimacy for his father’s political adventures in the name of Panchayat by holding a carefully orchestrated Referendum. Nobody knows what Maoists would have done had they obtained an outright majority in 2008, but BIPPA under its leadership was unnecessary at the very least. Oliars would need watching, but there are only lapdogs left where watchdogs once roamed free.

The best thing Bibeksheel Nepali and Sajha Party can do for Nepal is to disengage from politics and offer the country... Read More...

KATHMANDU, Sept 2: More than 40,000 automobile enthusiasts have visited the ongoing NADA Auto Show in the past four days,... Read More...