Of leadership, for the leaders 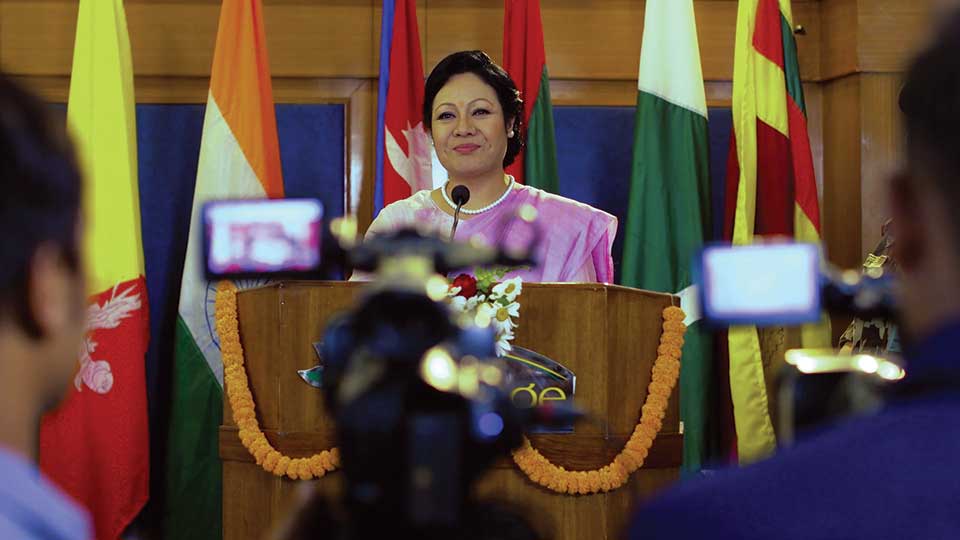 The Prime Minister carefully listens to the opposition leader who reveals that the health bill cannot be passed without the support of the party, and remarks, “You should know by now Madame Prime Minister, that party is always bigger than a person.” To which, the Prime Minister smirks, and counters, “but nothing is bigger than the nation.” The fictional world of Prime Minister Asha of Singha Durbar TV series mirrors the shenanigans of Nepali politics. But despite the horrendous power struggles and political mudslinging on the screen, Asha understands that collaboration is the key for the successful implementation of federalism. Dubbed as a “roadmap for governance and leadership,” the TV series made a comeback with season two in July 2018 with support from USAID, United Nations in Nepal, and Nepali diaspora—this time with a storyline which reflects the challenges and opportunities of federalism.

The woman who leads
“Asha understands that there’s no greater service than serving the country, that too by keeping vested interest at bay,” shares, veteran actor, Gauri Malla, who essays the role of the first woman prime minister of Nepal. According to her, her character, Asha can be regarded as a template for leadership, or what leadership should look like in Nepal. In a survey conducted by Search for Common Ground Nepal, more than 74 percent of respondents considered honesty as a key attribute of leadership. Followed by, discipline, decisiveness, courage, and humility. Seventy-nine percent of the respondents expressed that Nepal lacked leaders with these attributes, out of which, 61 percent believed that the current pool of leaders lacked the sense of responsibility toward the country, and the people. Singha Durbar is trying to change this narrative by showing that a different kind of leadership is possible—the leadership that is not tainted by greed, or by personal interest.

The story-telling of the series crafts humanized narratives, backed by evidences and research provides a pensive reflection of current day happenings. “One of the episodes shows the meddling of influential business people in the government’s tender process. The episode reminded me of the recent corruption scandal,” shares, Narendra Pokharel, an ardent viewer of the series. In the episode the reel-life, Prime Minister scraps the tender process and sets up an investigation team, to investigate the corruption within the system, and unflinchingly punishes people of her own party. But Asha’s life isn’t perfect.  She faces complexities in her marriage, as she fears her husband is having an extramarital affair and faces severe resistance from her adolescent son, who accuses his mother of being ignorant towards his needs. Here leaders aren’t always strong and unpierceable, as the reel-life Prime Minister doesn’t shy away to show her vulnerabilities, and insecurities that make her relatable to the audiences. She also addresses stereotype associated with mental health, by revealing that she herself seeks for psychologist support to address a traumatic experience. This, in turn, fosters empathy and debunks myths of leadership being “stoic”.

Embedding key messages of Sustainable Development Goals (SDGs), the series discusses sensitive, yet important topics of women and LGBT rights, violence against women, transitional justice, and subtly reminds the viewers that leadership requires a “progressive” mind. The Prime Minister of Singha Durbar fearlessly advocates for LGBT rights and also instructs her ministers to form a commission to review the report of same-sex marriage. In one of the episodes, she also exposes the political interference of influential politicians in the commission for transitional justice, and lobbies for an independent commission.

To address the patriarchal architecture, and misogyny that entrenches Nepali politics, strong women characters are introduced. This not only addresses the need for woman in the political forefront but also sheds light in the universal truth that leadership cannot sustain alone and that collaboration is the key to successful leadership. Here, the reel-life Prime Minister doesn’t believe in being a “lone wolf”. She is open to seek support, listens to diverse views, even her opposition without bias, and admits that leaders do not have all the answers, and should always address a challenge with an open mind, and through consutation. Also, there’s no denying that lone leadership cannot deal with today’s challenges, which are profoundly complex. In one of the episodes, Asha expresses that leadership requires ‘farsightedness’ and shares that, “federalism is an opportunity for leaders to practice people-focused leadership, as this is an opportunity to work together with the people, address grievances, and strengthen trust and collaboration.”

The fascinating use of storytelling, as an instrument of behaviour change, through edutainment dramas, not only helps amplify the imagination of the viewers to believe in progressive steps which were once denounced as impossible. But it also triggers expected actions from the part of audiences to evidence-based messaging which empowers individuals to speak against harmful social norms, or, encourages them to collaborate with others to seek for their rights.

Inspiring change
According to Ratna Kadayat, the Deputy Mayor of Geta, Kailali, the TV series not only encouraged her to take part in the local elections, but also instilled inside her the courage to defy stereotypes related to women leadership. For her the TV series, “helped resurrect her thought process to fight the patriarchal mindset that women should not answer back, and turn their backs on things that matters.” Acknowledging the power of storytelling through media, as an effective leadership, “knowhow” tool, Purushottam Nepali, Joint Secretary of Ministry of Federal Affairs and General Administration believes that it is necessary to prescribe the TV series to all newly elected representatives. “The remaining four years are critical for us, and leadership lessons of trust, collaboration, transparency, accountability, and honesty are pivotal for the success of federalism.”

The reel-life Prime Minister collaborates with the citizens and her political opposition to strengthen democracy, reminding her counterparts that ‘leadership’ should not be confused for ‘hierarchy’ or ‘alienation,’ and unapologetically takes decisions for the good of the people and the country.

It would be interesting to see if the real-life Prime Minister (KP Sharma Oli) succeeds in inspiring real life leaders to work for and with the people, with the best interest of the country at heart.

Fire in the house

First of all, let us all stand up from our seats and give a standing ovation to our Emperor for... Read More...

KATHMANDU, June 27: Rastriya Janata Party Nepal(RJP-N) on Thursday has expressed its dissatisfaction with the government accusing the latter of backtracking... Read More...

HETAUDA, Feb 2: The first meeting of the provincial assembly of Province 3 held in Hetauda on Thursday has set February... Read More...

Govt in a rush to inaugurate Dharahara
13 hours ago

NC objects to prorogation of House session
18 hours ago