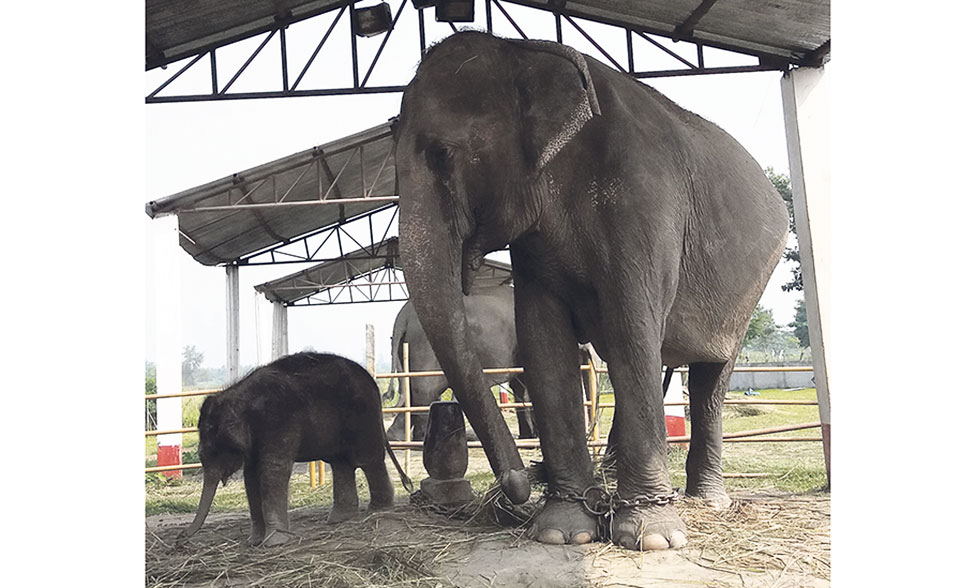 Shovakali, the nursing elephant with her yet-to-be-named calf at the Koshi Tappu Wildlife Reserve in these recent pictures. Photo: Amar Khadka/Republica

ITAHARI, Oct 24: To the great joy and excitement of the Koshi Tappu Wildlife Reserve fraternity, Shovakali, a 52-year-old elephant, gave birth to a healthy calf on 5 October. Though the calf, which the reserve family finds ‘cute’ and has been their darling, its safety remains a challenge for them to overcome.

“We feel very glad whenever an elephant gives birth. The reproduction event is not a small thing in cases of elephant because it does not happen that frequently,” said Ram Gulam Chaudhari, conservation officer at the elephant department of the reserve. “Now we have a new guest. She is doing fine, she is very healthy. But calves are vulnerable to diseases and nurturing them is always a challenging task,” he added.

Whenever an elephant gives birth at the reserve, it brings both happiness and worries. Raising baby elephants is not easy. Apart from keeping it healthy and its weight right, protecting it from other wild beasts is a challenge. None other than the wild elephants themselves are the primary ‘enemies’ of baby elephants.

“Calves are vulnerable mostly to other wild elephants. Male wild elephants don’t spare calves. It is very hard to save them from male elephants, especially if they are female,” reported Chaudhari.

According to Chaudhari, it is easier to control female elephants, be wild or pet. In the case of wild male elephant, sometimes controlling measures fall short. Though the reserve has been ‘consistently worked on putting safety measures’ for protecting the calves, they remain vulnerable to wilderness of the jungle.

“We continuously update our safety measures. There are other animals too, who are vulnerable. But no matter what, we can’t ensure full safety,” Chaudhari maintained.

Reserve officials are a little more concerned for the calf because baby compared to others, elephant calves have a very low rate of survival. Firstly, elephants have higher rates of miscarriages during their early months of pregnancy. Secondly, it is very hard to protect the calves from other elephants in the herd itself. Chaudhari says that the new calf has additional vulnerability: it’s a female.  “Wild elephants are more prone to attack female elephant calves than the male. Right now, officials are working round the clock to ensure her safety,” he said.

Apart from tight security, the new calf is getting high medical attention. This is crucial for the calf until it grows a little more. To block other wild beasts from attacking the calf, the reserve has erected extra fences.

An elephant called Makana had stormed in the reserve last time from India and created havoc in the reserve. Officials say that the male elephant Makana was very ‘mischievous’.

“Last time when Makana came and wreaked havoc here, we all had been so upset. It can come again, Shovakali and her baby have to be saved from him,” Chaudhari stated.

Reserve officials believe that Makana is ‘crazy’ for female elephants. And when wildlife goes crazy, ‘it is always very dangerous’.

“Since we all had been impatiently waiting for her birth, some have suggested naming it Pratikchhyakli,” Chaudhari revealed. “And Koshikali is preferred by some as she has taken birth on Koshi Tappu.

Nursing mother Shovakali is being fed special diet. This is important so that the baby gets sufficient nutrition while being breast fed.

Earlier to this, Shovakali gave birth to two babies. One of them is alive and is called Laxmikali. The other died soon after birth.

Two other elephants in the reserve, Dadamikali and Saraswatikali, are also pregnant. Both of them are 13-year-old and are pregnant for the first time. They are pregnant for 18 months now and will give birth after four months, if everything goes well. Elephant gives birth after a pregnancy period of 22 months.

Story of another elephant at the reserve, Ambikakali is sad. She is already 60 but has no baby yet. She had conceived once but had a miscarriage. Elephants love motherhood like other mammals and they exhibit such desires through their behavior. The reserve, according to Chaudhari, makes every effort to save babies of every female elephants.

“Ambikakali is already 60. She had conceived only once. But could not have a baby,” Chaudhari said.

On an average, an elephant can give birth to six babies in her lifetime. While the survival rate of the calves varies from the types of elephants, their vulnerability is considered a sensitive matter worldwide.

At Kohsi Tappu, there is quota of 10 elephants who ride tourists. But currently there are only five elephants at the Tappu. And since not all of them are in a position to do the duty, tourism activity has been affected, reserve officials say.

“Some are nursing mom, some are pregnant, and they can’t be put to work. So we are having difficulty in operating tourist activities that depend on elephants’ services,” said Chaudhari. 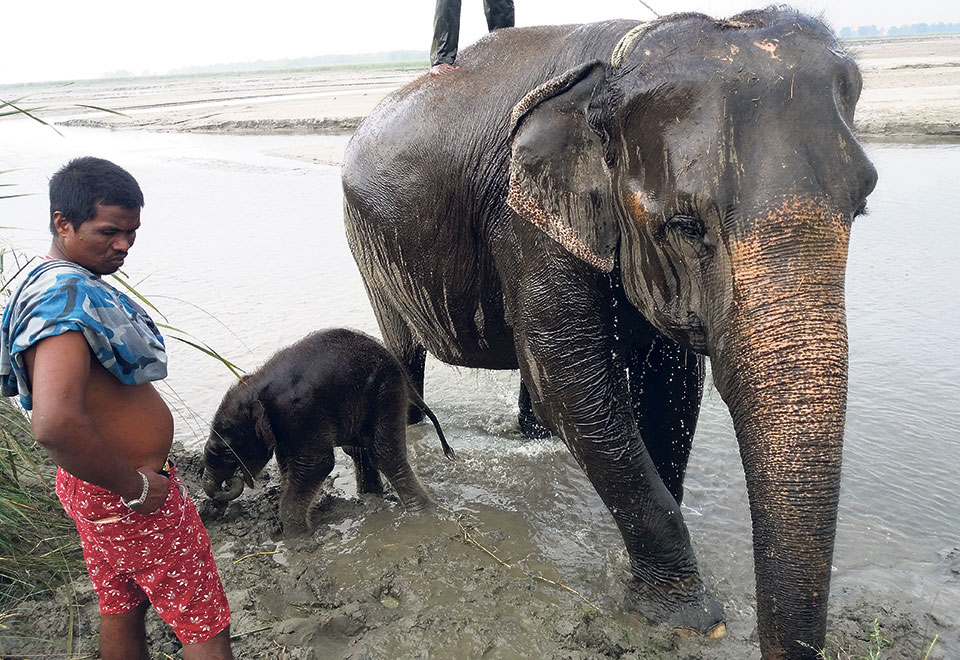 Koshi Tappu Wildlife Reserve to monitor the area through drones

ITAHARI, Oct 27: The Koshi Tappu Wildlife Reserve is bringing drones into use to monitor the region in a better way. Read More...