“No province or municipality has shown any expenditure on drinking water for the last five years.” 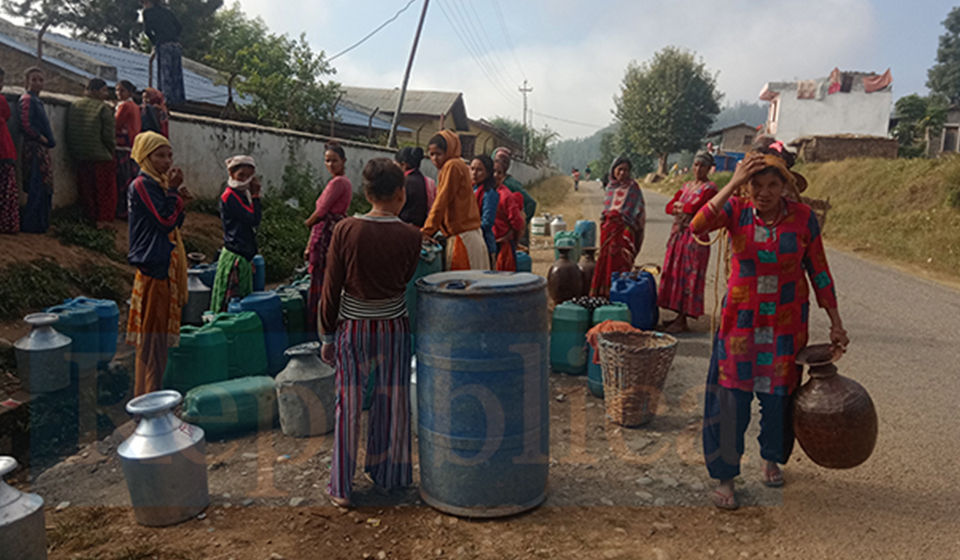 KATHMANDU, June 21: People's representatives have complained that the populace in rural areas has been deprived of clean drinking water for the past five years as ‘large’ projects aimed at catering to larger populations fall under the jurisdiction of the federal government.

The MPs of the House of Representatives made the complaint at a two-day seminar that was attended by the MPs of the Development and Technology Committee of the Federal Parliament and the heads and representatives of the Ministry of Water Supply and its subordinate offices. Minister for Water Supply, Umakanta Chaudhary, while answering the questions raised by the lawmakers, said that he would propel initiatives to solve the problem.

“Citing the population size as a reason, the federal government has been allocating budgets to the provincial and local level governments in the form of complementary, conditional and special grants to implement the plans of the Ministry of Drinking Water at regional levels. In regards to this, even after facilitating additional budgets, many drinking water projects remain in limbo,” says Minister Chaudhary.

Minister Chaudhary agreed that since the federal government is only allowed to undertake projects that cater to more than 15,000 people in Madhesh, 5,000 in the hills and 1,000 in the mountainous region, projects targeting the deprived and Dalit communities could not be advanced. Even though the Ministry of Drinking Water has given a budget to the provincial and local level governments for the implementation of the projects, details of where it was spent and how much progress has been made in the past five years have not been provided by any of them.

Chairman of the Development and Technology Committee, Kalyani Khadka, says that the people have not been able to get access to clean drinking water as a consequence of the inclination of the ministry to withdraw from old and unfinished projects. She complained that while the federal government, the provincial and local level governments had allocated a budget for certain projects, not one of them had specified it in their plans. MP Ganesh Pahadi argued that if the federal government was to only build drinking water projects in the hilly region that would benefit more than 5,000 people, then the Sindhuli district would not witness the occurrence of even a single project.

MP Sanjay Gautam mentioned that declaring ‘Open Defecation Free Districts and Zones’ was impractical, limited to paperwork, unimplementable and served as an opportunity for officials to gobble up allowances in dollars.

MP Yagya Sunuwar said that the citizens were not getting clean drinking water since the projects were introduced without a proper on-site study and identification of problems. In regards to this, he went on to elucidate that though the pipeline expansion work of the Melamchi Drinking Water Project — a project that has been under construction for more than 20 years — was satisfactory, not having conducted tests regarding the distribution of water had further complicated the project. Most of the lawmakers who participated in the seminar complained that the federal government often pulled back from the drinking water projects using population size as an excuse which had contributed to the incompletion of the projects.

Creative classes a must for students’ capacity building

US government unlikely to get fully back to business for days

WASHINGTON, Dec 23:  The federal government is expected to remain partially closed past Christmas Day in a protracted standoff over... Read More...

Nepal's economy is not likely to be Sri Lankan, but it is possible: Former Governor Chhetri
33 minutes ago