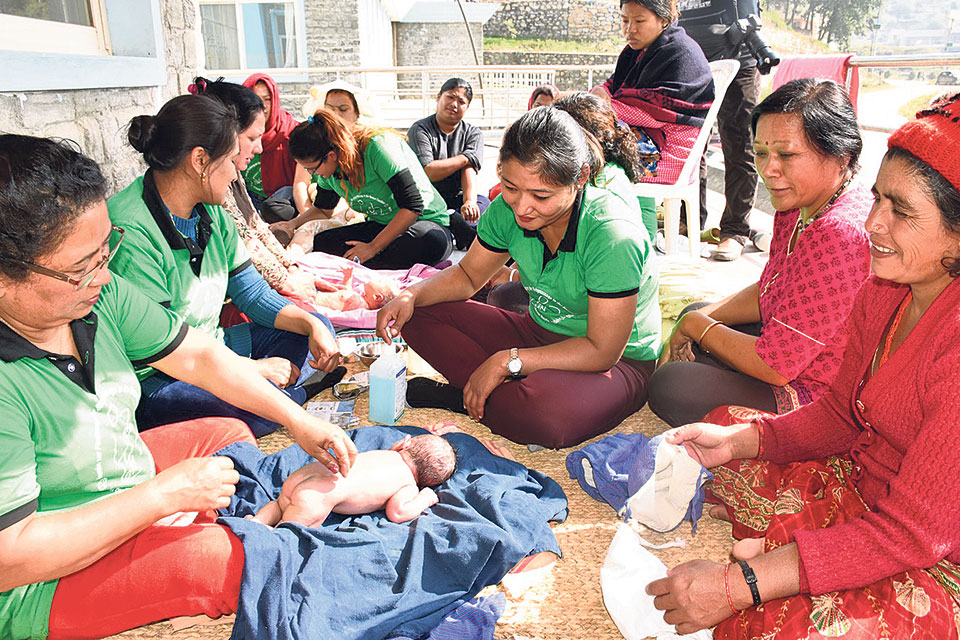 BANEPA, Nov 25: “It is a unique style of oil massage which strengthens the body and mind of a newborn. It has gained popularity in Europe but is being forgotten in its native land,” says Nasma Scheibler Shrestha.

“It is very sad that we are distancing from such a precious skill handed over to us by our ancestors,” she laments.

Locally known as ‘Mastayaka Chika Bukegu’ (oiling babies), Newari families followed it as a tradition until sometime ago. In the 1980s, Shrestha took it to Europe and it gradually became popular there as ‘Baby Massage Newari’. European women quite loved their babies being oiled the Newari way and they also realized the benefits it was giving their babies. Shrestha meanwhile drew headlines for spreading Nepal’s massaging techniques beyond the border. However, she feels sad this ‘amazing’ technique is being forgotten by the natives.

“I found that Nepalis are taking it as a burden. They don’t want to go for it,” said Nasma, who was born and brought up in Bhimphedi and is currently living in Switzerland with husband.

“I took the initiative to spread it in Europe earlier. Now, I think I should do it rather in Nepal.”

Oiling newborn baby and the mother is still in practice in the country. However, benefits are not enough if the traditional techniques are not followed.

Nasma loves to call the ‘traditional strokes’ unique and wonderful.

“There are sessions where mother and baby feel relaxed near the fire or under the hot sun. Then they are massaged following certain techniques. But the new generation has slowly forgotten it.”

She married a Swiss national in 1980 and settled in his country since then. Amongst a few precious things she carried from home, the oil massage technique which was taught by her grandmother was one of them, she says.

“My grandmother taught it to me, and I shared it with many in Europe.”

Because of the huge demand for the massage, Nasma said she started training women. This established a vocational school for baby massage in 1986. Midwives, pediatric nurses, physiotherapists and parents took classes in her school.

“Babies who would cry due to stomach ache or indigestion and nursing mothers having sleepless nights due to muscle cramps were cured by the massage. This traditional massage of Nepal did wonders to their health and lifestyle,” stated Nasma. “I told them the massage gives very peaceful sleep to both the mother and baby. This was told to me by my grandmother.”

“They learn from our school and then many of them open such classes in their own places,” Nasma said. “It is being loved because this massage shows a great result immediately.”

Nasma had given birth to her first baby in 1983. She invited her mother Jamuna Maya for assisting her for the post-natal care. When Jamuna Maya started massaging the baby girl right at the hospital, nurses objected to it.

“The baby is just fine, why are you massaging her?” Nasma quoted the nurses as saying. “They were quite surprised and even scared to see my mother doing so.”

The reaction of the nurses made Nasma realize that oil massage on newborn and mother is not a normal practice in Europe. And she wished that she could teach it to them.

“I made a commitment that I would teach them our style of oil massage. I wished to spread it everywhere.”

In the last two decades, she indeed made efforts to realize her dream. In this journey, her husband was by her side. The couple makes frequent trips to Nepal these days.

“Earlier, spreading it in Europe was important. Now, rekindling the practice it in Nepal seems to be more important,” states Nasma, who is in Nepal for a short visit.

The couple, when they are in Nepal, remain busy providing the oil massage training to aspirants. Nurses, housewives, health workers join the training sessions.

“This is the age of technology and machines. However, oiling a baby or mother is not something machines can do. It needs skilled hand and smart thinking,” Nasma noted. “It needs trained a person.”

According to Nasma, researches have been done on the benefits of baby massage both in Nepal and elsewhere. And it has been proved that massage done by skilled hands has long-term health impact on mothers and babies.

“That is why we should revive this technique in our communities. Fast life does not mean you do away with even the most important and basic practices,” she says.

The couple started providing training in Nepal since 2006. And it is coordinated by Dhulikhel Hospital.

According to Dr Rajendra Koju, dean of the School of Medical Sciences, Kathmandu University, a preparation is being done to include a chapter on the traditional oil massage in the curriculum of the Bachelor of Nursing.

“We are doing homework on this. Necessary research and studies are being done,” he said.

Homestay heals you from the inside: Yogi Bikasananda

POKHARA, Jan 19: Homestay is not a healing center. However, that can certainly be made so, according to Yogi Bikasananda.... Read More...