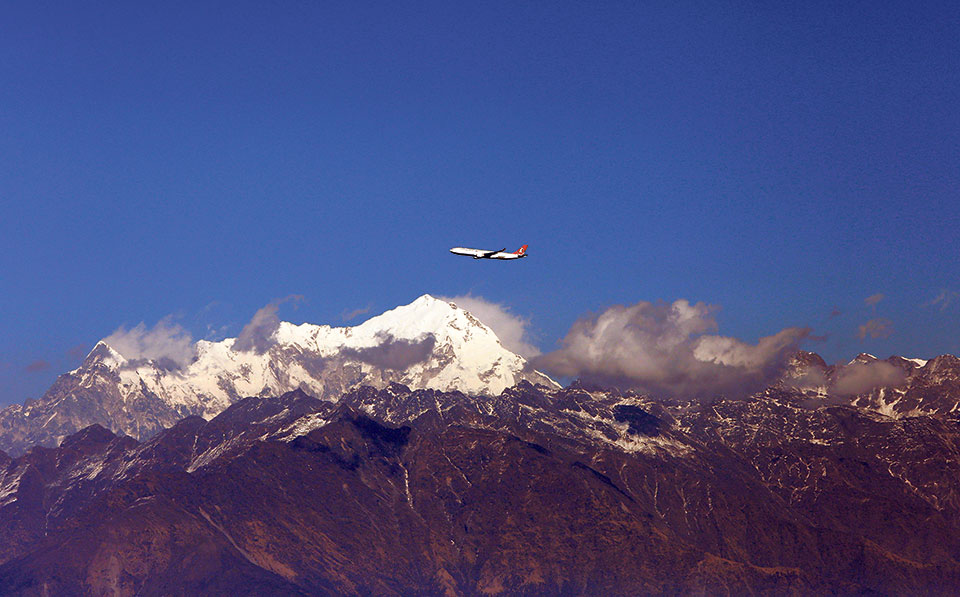 Files A Turkish Airlines aircraft is seen flying with the Himalayan range in the backdrop. Photo: Dipesh Shrestha/Republica

KATHMANDU, June 21: Although the agreement between Nepal and India for new air routes has been considered a big achievement for the country, the agreement has also been criticized for not being beneficial to Nepal as expected.

Experts say the recent air routes provided by India lacks what Nepal had been long proposing with India: western air entry routes of Nepalgunj and Mahendranagar. Entry of Nepal-bound flights from these western routes would have shorter distance and less fuel consumption, and the air traffic would be easier to manage, according to experts.

Following a two-day meeting held in Kathmandu last week, the Civil Aviation Authority of Nepal (CAAN) and the Airports Authority of India (AAI) had signed an agreement on June 16 on the new air entry routes for Nepal.

India has agreed to provide eastern air entry routes of Biratnagar and Janakpur for all high-flying aircrafts coming to Nepal. As per the agreement, only aircrafts flying 24,000-feet or lower can enter Nepal via the Mahendranagar route while decision on the entry route of Nepalgunj has been postponed for further discussion and studies. India will give decision about these routes by September 2018.

“There is nothing to be happy for this route agreement. Nepal is still not getting what it really needs,” said Ashok Pokharel, former board member of Nepal Airlines Corporation (NAC).

“Nepal actually needs an entry route without any prohibition from where a smooth flight can be operated. Certainly, permit for the eastern air entry route will ease things up for flights coming to Nepal but the western entry routes also play vital role for development of the aviation sector,” Pokharel added.

Flight coming from the Gulf and European countries will be benefited if Nepal received permit for the western entry routes.

“India itself would benefit if it allows for both Nepalgunj and Mahendranagr routes.” Pokharel further said that this agreement might be convenient for India but there is nothing to be happy for Nepal.

The two air routes via Nepalgunj and Mahendranagar are crucial for the Gautam Buddha International Airport (GBIA) and Pokhara International Airport (PIA), which are currently under construction. The government has targeted to complete these airports within one year and three years, respectively. According to CAAN, it is comparatively easier for flights to land at Bhairahawa and Pokhara if they can use highflying entry routes via Nepalgunj and Mahendranagar.

Critics are also unsure if and when the agreed air routes come into operation.

“International air entry route is a matter of international concern. So, even after the bilateral agreement, there needs to be a multinational approval. The approved routes do not have any fixed timeline for operation,” said Ghanashyam Acharya, spokesperson for Airlines Operators Association of Nepal (AOAN). “The agreement has been economical for traffic coming from the east only. The under-construction international airports are not going to get benefited with these routes.”

He said it was a weak decision by the government to ask for air routes after starting construction of airports. “The air routes should have been decided before starting the GBIA and PIA airport projects,” Acharya added.

KATHMANDU, May 23: The Rastriya Janata Party Nepal (RJPN) has said that the government's decision to increase the number of local... Read More...

'Rock On 2': Not rocking enough

High-level visits are positive but not enough: Experts

KATHMANDU, Aug 22: Former diplomats and international relations experts have said that possible visits by the Chinese and Indian presidents to... Read More...