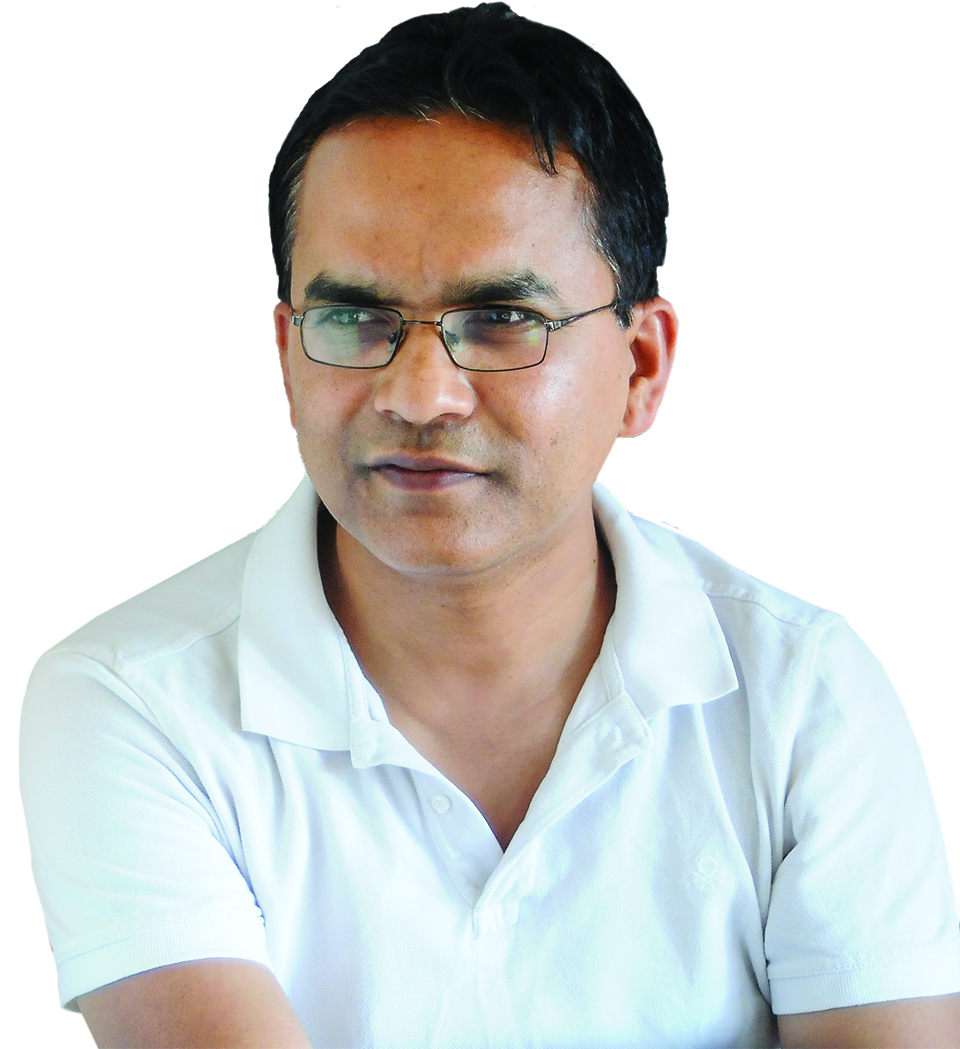 PhD in Agricultural and Resource Economics from the University of California, Berkley, Biswo Poudel, has closely studied Nepal’s economic trends.  What does he think of this year’s budget? Where will Nepal be headed to economically in the days to come? Mahabir Paudyal and Raj Kumar KC met with him to take his insights.

Like in the past, opinions are divided about the budget announced by the finance minister two weeks ago. How do you evaluate the first federal budget?

This year’s budget was keenly watched because we were going to have the first federal budget in country’s history. It must be little bit ambitious because it signals the plan of the new government. This is the first time communists have total control over the state in a democratic way. We were looking at this budget carefully. It was curious to know what their analysis of current situation is and what their plans to address the situation are.

The first budget announced by Subarna Shamsher under BP Koirala’s cabinet in 1960 had identified two major problems. The first was related to currency. Nepali currency had not been in circulation in the whole country. Circulating Nepali currency was the only way to strengthen nationalism, which was one of their agendas. Second was birta issue. Almost 37 percent land was under birta system and the government was not making any money from that. There was a massive inequality in land distribution. And Congress was at the platform to ensure social justice and equality as a socialist party. Congress government identified these two as the major issues and unveiled policies to address them. They embarked on this journey and eventually became successful. Birta was abolished and so was the dual currency system.  This marked a major departure in our economic systems.

Some say dual currency system was actually abolished by King Mahendra, but the process had started much earlier. In 1960, they started a program which basically guaranteed unlimited exchange of Indian currency in Kathmandu. Exchange rate fluctuation was a big problem at the time. Six years later, when Surya Bahadur Thapa came up with the budget, Nepali currency started to be widely circulated across the country.  A good budget is the one that marks a sharp departure from the old practice and paves the way for better future. The first budget unveiled by the democratic government in 1991 somehow marked that departure.

How so? Will you elaborate on it?

Dependence of national budget on foreign assistance was huge—almost 45 percent—back then. We had borrowed heavily between 1980 and 1990. Repayment of loan, which accounted for 31 percent of recurrent expenditure, was another problem. They were projecting it to be more than 50 percent.  The 1991 budget identified these problems and came up with policies to address them.

The budget this year has set the target of attaining eight percent growth rate. How will that be possible?

It is totally attainable. Think about the last two years. We did not have lots of plans. Only thing we offered was peace. Loan going to private sector increased by almost 20 percent and government also did little work on construction. Despite that we had 6.9 percent growth. And this year, we had six percent. Last year, we had political uncertainty, this year we don’t. Many local governments are also working in their own way to increase productivity and growth.

Today our service sector is growing very fast. Manufacturing sector is not developing as fast, yet eight percent growth is not a huge jump. Political stability could possibly lead us there. What makes me really hopeful of attaining eight percent growth is the import of machinery. This leads to growth. Buying machines increases productivity. Same thing goes with the purchase of petroleum products that has increased by 36 percent. At the early stage of industrialization, trade imbalance is bound to happen but we have more tourists coming in. We used to have around 3,00,000 tourists in 1994–1995.  Now we have around one million tourists coming to Nepal every year. The average spending of tourists is on the rise, but we have to make them stay here for longer days. Thus eight percent target does not look unattainable to me.  We should not be suspicious about it.

Is there mismatch between goals set and the policies announced in the budget?

It seems realistic. Target has been set for agriculture production which is expected to be doubled in five years. But we have to understand that the goals that the budget has set are the continuation of previous goals. Budget has given continuity to the past projects such as irrigation projects, road construction and construction of postal road and many others.

Many say the budget is not in line with federal aspiration. What is your observation on that?

That allegation sounds a bit unfair to me. We should understand that the budget finance minister announced is the federal budget. It should not be confused with provincial and local government budget. Provincial and local governments will come up with their own budget plans. Yes, central government had to consult with the provincial governments for effective mobilization of resources. National Planning Commission (NPC) was formed very late. We do not have resource mobilization commissioner yet. Resource mobilization is being undertaken by the bureaucrats at the moment. Thus NPC did not contribute very much on this budget. In that sense, it can be said that the central government is working unilaterally. It might look like finance minister’s and prime minister’s budget. But to be fair to the finance minister this may be because the institutions like natural resource mobilization commission was not in place and a lot of legal issues are to yet to be settled regarding the jurisdiction of local, provincial and central governments. Many seem to be confused about federal system. After all, this is the first federal budget. We can rectify mistakes of this time in the next budget.

Will we be able to meet the revenue collection target?

The budget has set a lofty target of collecting Rs 931 billion revenue. Local governments will also be raising tax. It is really confusing how this revenue would be generated. Raising Rs 1000 billion is not easy.   I don’t know what kind of taxation authority the finance ministry has in his mind.

If the local government is not given taxation authority, they cannot do anything. But if local authorities are given authority there is a possibility of massive exploitation of the system.

What are some of the things that you find deeply flawed in the budget?

I think revenue system in our country is deeply flawed. What we are doing right now is collecting money and spending that money on salary of government employees as recurrent expenditure. This is totally unfair and does not make sense and does not do justice to the tax payers.

Actually we are distributing people’s money to the rulers. Spending huge amount of revenue on recurrent expenditure will lead to bureaucratization of the system.  The budget size is almost 50 percent of the GDP. It is a great paradox that general public are getting nothing out of that huge amount of tax they pay. The budgetary system does not talk about the reforms in the governance system. In 1991, we had done that though the government had to face a lot of criticisms.

Another deeply flawed thing about the budget was continuation of constituency development fund. We are giving them 100 million rupees and giving them free hand to spend that big money. The finance minister’s explanation that he was under some sort of ‘trap’ is a lame excuse. This system has failed and we all know that it has.  Every party knew that. It does not need to be tested again. The finance minister should have been courageous enough to discontinue it.

The government is talking about reviving the state owned enterprises. Will that be a right move?

In the white paper the finance minister had portrayed a dismal situation of our economy. Where does our economy stand at the moment?

Actually he should have taken average of last two years, the period of relatively high growth, instead of ten years while making statements about country’s economic situation. The reference that finance minister had given looks weird. He has taken different average for different programs.  He just magnified the problem with the view of putting blame on the past governments. That aside, I am optimistic about country’s economy. Remittance is growing and FDI has doubled. Relations with foreign countries have significantly improved. All political problems have been solved. We have political stability which is very important for economic development. Both of our neighbors are doing really good in terms of economy. Most of all, we have the party with total control in all three levels of government, with all top state powers vested in it. Yubaraj Khatiwada must be the first finance minister of the country who is getting such a supporting environment to work in. He must be the first finance minister to get this opportunity in the last several years.  Rarely has a party in Nepal got to work in such a favorable situation. Finance minister has no liberty not to deliver.

What are some of the issues that the budget has failed to address?

The budget has not given adequate priority to infrastructure building. Infrastructure is the backbone for economic growth. Besides, health and education sectors should have been given due priority to attain meaningful and broad-based goals. More attention should have been given on tourism. This is not the case with the budget this time.  Budget has failed to identify the immediate priorities. For a country like ours, we need to pick two or three priorities and concentrate our efforts exclusively on them.

What is your overall observation about achieving a desired economic growth?

For me this is possible. Culture of entrepreneurship is rising in the country. I see lots of prospects of attaining growth.  When economy improves everybody benefits. Improvement of economy starts from the cities. Cities attract people and investment. Impact of economic growth ultimately makes all villages affluent. This is how economic development process takes place. I see good days ahead.

High-level visits are positive but not enough: Experts

KATHMANDU, Aug 22: Former diplomats and international relations experts have said that possible visits by the Chinese and Indian presidents to... Read More...