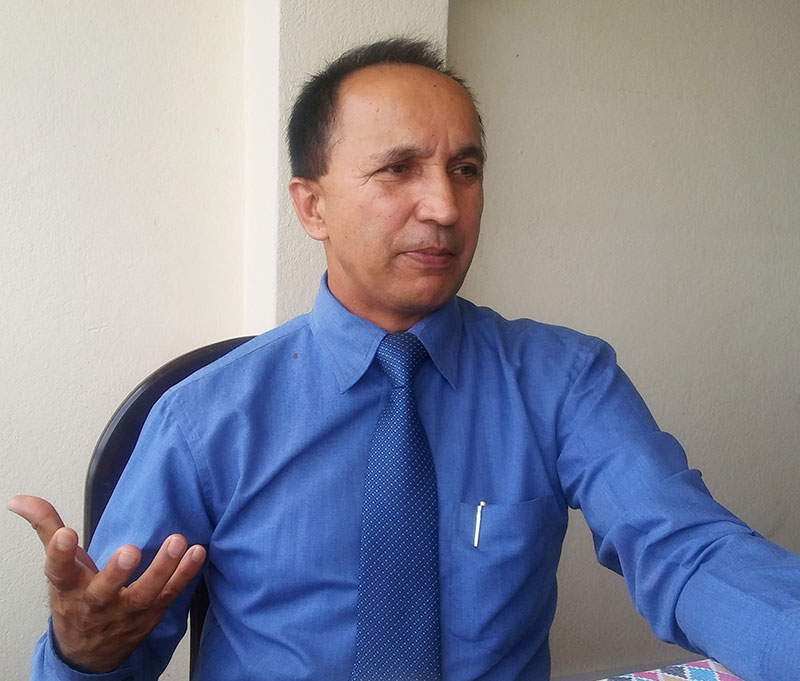 Coordinator and Associate Professor of Tribhuvan University’s Master’s Program in International Relations and Diplomacy (MIRD), Khadga KC, is of the view that Nepal need not have sent special envoys to India and China. In an interview with Republica’s Biswas Baral and Mahabir Paudyal, KC shed light on Nepal-India-China dynamic and various aspects of Nepal’s foreign policy. Excerpts:

How do you evaluate the state of Nepal’s relation with India and China in the context of the recent government change?

First of all, I see no rationale behind sending special envoys to India and China. Special envoys are sent only in special circumstances. When a country faces political crisis, when it lacks international recognition, when it suffers a national catastrophe, and when there is imminent security threat and threats to our primary and secondary national interests, only then are special envoys sent to foreign countries to gather their support. None of these conditions were met in Nepal. So the sending special envoys is hard to justify.

But the government claims the visits helped clear misunderstanding with India and China.

I have a different opinion about the so-called misunderstanding. If Nepal had overlooked the security concern of India, or if we had caused difficulties to India in terms of its trade, perhaps you could say we caused misunderstanding. But that was not the case. Our relation with India worsened not because of Nepal but because of India. Nepal promulgated its constitution through universally accepted democratic procedures, and with the approval of over 90 percent of its lawmakers. If the largest democracy of the world has an issue with this process, that is not our fault.  It is a mistake of the southern neighbor to expect Nepal to be dependent on them even when it comes to drafting its constitution, just because India played a crucial role in Nepal’s past political movements. A sovereign country can take its decision independently.

Thus it was unnecessary to send special envoys to talk about the same issue. Raising our constitutional issues in India has created unnecessary controversy. It has made the problems worse.

What do you make of Deputy Prime Minister Krishna Bahadur Mahara’s China’s visit as a special envoy?

This was also unnecessary. The new government had already expressed its commitment to implement the ten-point agreement that the previous government of KP Oli signed with China. The new prime minister also comes from a communist background and is said to have close ties with China. China had also welcomed his government. So why did we need a special envoy? If Oli’s successor had been anti-China, perhaps in that case sending an envoy to China would have been warranted.

Prime Minister Modi had congratulated PM Dahal over the phone. China had also welcomed the new development in Nepal. This means both China and India had recognized the new regime. This was enough. That we sent special envoys to China and India despite this shows our leaders lack courage to be assertive in international relations.

It also appears that the government sent an envoy to the northern neighbor to show it also cares about China.

Its first priority was India. But given the trade and transit deals that Oli signed with China and given the growing goodwill of China among Nepali people, the government sent an envoy to China as well. Nepalis displayed resilience during the blockade as they knew who was behind it.  The blockade made Nepal seek an alternative transit via China. The nationalist emotions seen during the blockade have not ebbed. Thus sending envoy like a strategic move not to displease China and to show to the people that the government is not pro-Indian.

Earlier you said Nepal has no misunderstanding with India. If so why do you think India imposed the blockade?

To stoke some big egos, I would say. The blockade was the result of post-colonial hegemonic mindset of India. Some say the blockade happened as political leaders in Nepal didn’t heed Indian Foreign Secretary S Jaishankar who had come to Nepal as PM Modi’s envoy three days before the promulgation of new constitution. But I do not believe in this theory. Like I said, the fact that past leaders in Nepal consulted India on certain matters does not mean we have to keep consulting them. It was mistake of India to expect otherwise.

The blockade did not happen because of Nepal’s fault. You can say the same thing about the the blockade of 1990. Post 1990 changes, there has been a bad culture of seeking Indian advice on every issue. Leaders also made the mistake of depending on India for everything. They should have been more assertive.

But given India’s immense clout in Nepal was not it natural of India to try to influence affairs here?

There is where the paradox lies. If India was a totalitarian state, perhaps it would be better suited to dictate constitutional matters of its neighboring countries. But India is a liberal democracy in principle. India has been the largest democracy in the world after the Second World War. But when it comes to Nepal, India has been rather interventionist and hegemonic.

How do you see the role of China? Is China trying to establish itself as India’s strategic competitor in Nepal?

Yes, China has expanded its reach all the way up to Indian Ocean. India is said to be reacting by also showing an interest in South China Sea. But China is not competing with India here in Nepal. Chinese leaders advise us to have good relations with India. To this day, Chinese have not shown an open interest in Nepal’s internal affairs, unlike India. China is rising as a powerful country in global arena, more powerful than India. Much of Europe is now dependent on China. China bailed out the Greeks. It has started to offer financial aids to a number of European countries.  While India is building strategic partnership with the US to counter Pakistan and China, China has already become assertive in global affairs singlehandedly. China is not competing with India in Nepal.

Another school of thought is that China sees Nepal as falling under the Indian sphere of influence. Is that the case?

China had its limitations until recently. It was a developing economy and therefore it did not have great influence in global sphere. It had billions of people to feed. But China’s foreign policy has changed as it is emerging as a global power. China’s ‘neighborhood first’ policy and its investment on ‘One Belt One Road’ project are examples of China’s ambition to become a global power. Thus China is in no position to close its eyes on Nepal. Rather it is concerned that other foreign powers could make Nepal a playground and thus destabilize Tibet. Thus it cannot remain a spectator to what is happening in Nepal. The belief that Nepal is not a Chinese priority is thus false.

Do you also see recent external meddling in Nepal, including the blockade, as a failure of our diplomacy?

Political stability is the first condition for functional diplomacy. Compare the diplomats of the 60s with those we have today. Yes they may have been feudal and elites but they were far more competent than those we have today. Even if they were political appointees, they were competent. Since 1990’s political change, our diplomatic prowess is in decline. After 2006, it has become even worse. Today we have reached a point when we seek assistance of others even for changing the government. How can we expect our diplomatic corps to be assertive in such a situation?

Another problem of Nepal is that we have not been able to develop economic nationalism. Political issues dominate discourse. Unless you become economically strong, you cannot make your institutions function. You cannot be assertive in the global arena. It sometimes feels like we have embassies in the Gulf and Middle East only to facilitate the deportation of dead bodies of our migrant workers. What can be more unfortunate? This is why economic nationalism should be our agenda today.

But we also don’t have the institutional mechanisms through which we can draft our India policy or our China policy, do we?

Both the government as well as the corporate sector invests in research in India. Therefore they have vibrant think tanks. We also had competent think tanks and research institutions. During the 60s, king Mahendra had brought the concept of developing think tank. So we had Studies in Nepali History and Society (SINHAS), which carried out various debates and researches on Nepal’s international relations. We can look back to the SINAHS journals of the 60s and 70s. We had SEDA where influential leaders like Pashupati Shumher and Prakash Chandra Lohani also worked. The Ministry of Finance would take the inputs of SEDA in economic planning.   After the 90s, we politicized all institutions including the universities. Political leaders started to behave as if they are the masters of all issues. They did not feel the need for think tanks, they only needed followers.

How is Master’s Program in International Relations and Diplomacy (MIRD) doing? Can this institution be developed into a think tank?

It can be and this is what I plan to do. In two years since this department was established, we have built extensive networks with international relation experts and diplomats based in Kathmandu. We have already signed some MOUs with universities abroad. We have started collaborating with China and India. We plan to take research, publication and teaching together. We plan to develop this institution as a foreign policy discourse center. This is my dream. We are in communication with the University Grants Commission for funding. We have given the best exposure to the students in this department.

How have the government and the corporate sector responded to your overtures?

I have been personally involved in garnering financial support from the government as well as corporate sector. I went to the National Planning Commission to ask for new building for this institution. But this was not their priority. The outgoing foreign minister had shown some interest and vowed to lobby for this. Today we have a new foreign minister. I don’t know if he will be interested. The leadership does not seem interested in policy institutes.

TIKAPUR, Jan 17: Despite numerous efforts of Tikapur Municipality to build settlements with earthquake-resilient houses, the people in the municipality are... Read More...