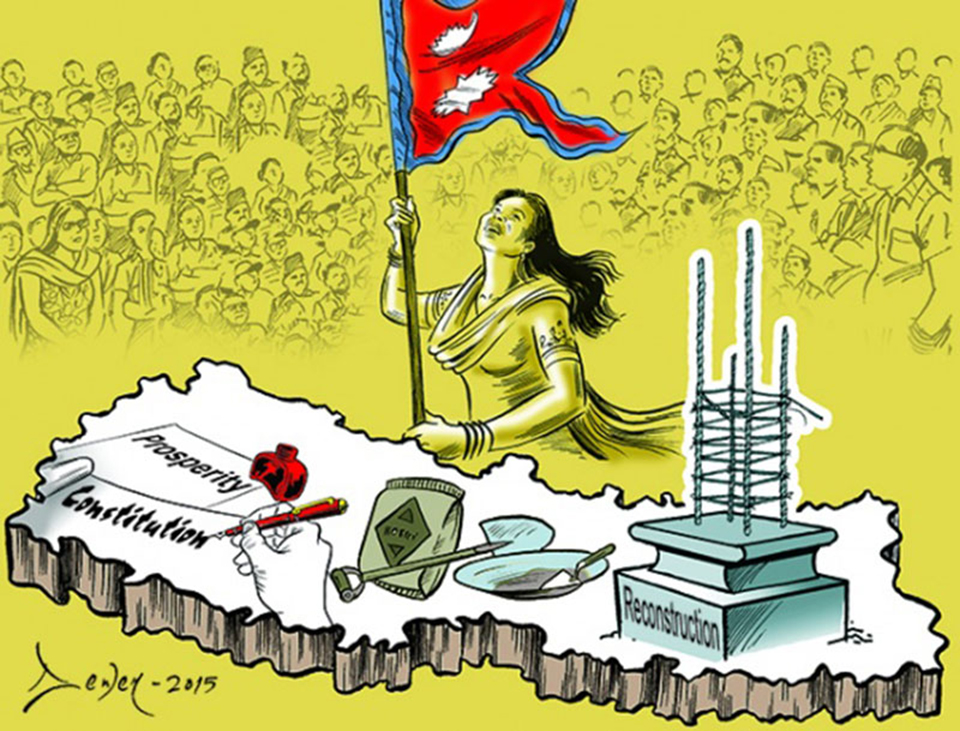 Overwhelming participation of people in elections shows they are desperately waiting to materialize their dream of prosperous, peaceful and politically stable Nepal.

Constant deferral of our dreams of prosperity, political stability, rule of law, good governance, accountability and transparency reminds me of Langston Hughes’ poem “Harlem,” where he asks a profound question. “What happens to a dream deferred?” he asks, “Does it dry up like a raisin in the sun? Or fester like a sore—and then run?”

Hughes (1902-1967), an African American novelist, short story writer, poet and playwright, wrote this poem when the racial injustice continued in America and the people of color suffered racial slurs in everyday life let alone enjoying equal rights along with white people. Blacks were treated like ‘second-class citizens’ or the ‘descendants’ of slaves.  Though they continued fighting for their ‘inalienable right to life, liberty and pursuit of happiness,’ they were never heard. Hughes expresses this angst in the poem.

In Nepal too, people kept fighting for their sovereign rights and identities. But they were and still are cheated and deprived of even basic necessities of human life.  For the autocratic Rana regime that lasted for 104 years until 1951, people were just Raitis. The rulers used all the resources and treasures for their own lavish lifestyle and luxury, people be damned. The partyless Panchayat established by King Mahendra in 1960 that continued until 1990, started to call people Prajas. Ultimately, Nepal ushered in a new era with the establishment of multiparty democracy in 1990.

This time the people felt their dream of prosperity and political stability will come true and they won’t have to fight for it again. But that could not happen.  The country was plunged into a bloody civil war. Violence, corruption, lack of rule of law continued. Then King Gyanendra took advantage of the political turmoil, dismissed the government and suspended people’s rights transforming Nepal from constitutional to an absolute monarchy. He turned 1990’s constitution into a meaningless document, undermining years of struggle by Nepalis for a multiparty democracy. Gyanendra’s coup brought all the political parties together to a great relief of Nepalis from a decade-long bloody civil war that took away precious lives of hundreds of people, caused disappearance of many and injured and maimed thousands.

People’s hope revived when their representatives elected from the second Constituent Assembly held on November 19, 2013—after so many ups and downs, confusions and deferrals—ultimately promulgated the constitution in September 2015. The recently held local, provincial and federal parliament elections have put to rest the protracted transition.
But our dream has not been fulfilled yet.

Overwhelming participation of people in these elections shows that they are desperately waiting to materialize their dreams of being proud citizens of a prosperous, peaceful and politically stable Nepal.  It is for this that they exercised their democratic rights and voted their candidates despite the threats of violence. Nobody could stop them from utilizing their sovereign rights to cast their votes. The election was peaceful and successful. It has paved the way for the institutionalization of federal democratic republic and execution of the constitution, taking us close to realizing our dreams.

The Left Alliance of CPN-UML and Maoist Center got landslide victory because it was able to capitalize on the agenda of political stability and prosperity, which voters were desperately craving for. KP Sharma Oli and Pushpa Kamal Dahal along with other leaders of left alliance promised that they will resist petty party politics and greed for power in their vigorous political campaign from Mechi to Mahakali. People have noted what they have promised.

On the other hand, Nepali Congress suffered ignominious defeat because it failed to promise prosperity and political instability. People were not impressed with NC’s projection of left alliance as a force bent on establishing totalitarian communist rule, which is simply not possible in today’s world where ballets, not bullets rule.

Who won and who lost is not important. The question is does this victory become the victory of Nepal and Nepalis? Will this victory lead to transformation of Nepali people’s dream into reality?

The country celebrated when election results came out. People sang and danced in the streets.  The spectacle of the spectacular sounds of musical instruments playing, victorious leaders and cadres smearing vermilion powder, sweet fragrance of garlands of colorful flowers pervaded the atmosphere. If the political leaders still do not rise above petty party politics and greed for ministerial posts, the signal of which has started coming out in the media, it will shatter people’s aspirations for prosperity and development. If this happens, their dream for better future will not only “dry up like raisin in the sun” but like Langston Hughes rightly suggests “explode.”

The author is lecturer at Central Department of English, Tribhuvan University

Having rails is what we will have to strive for ultimately but at the moment it is important to make... Read More...

Dr Om Murti Anil: A cardiologist who has won hearts, not just treated them!
6 minutes ago