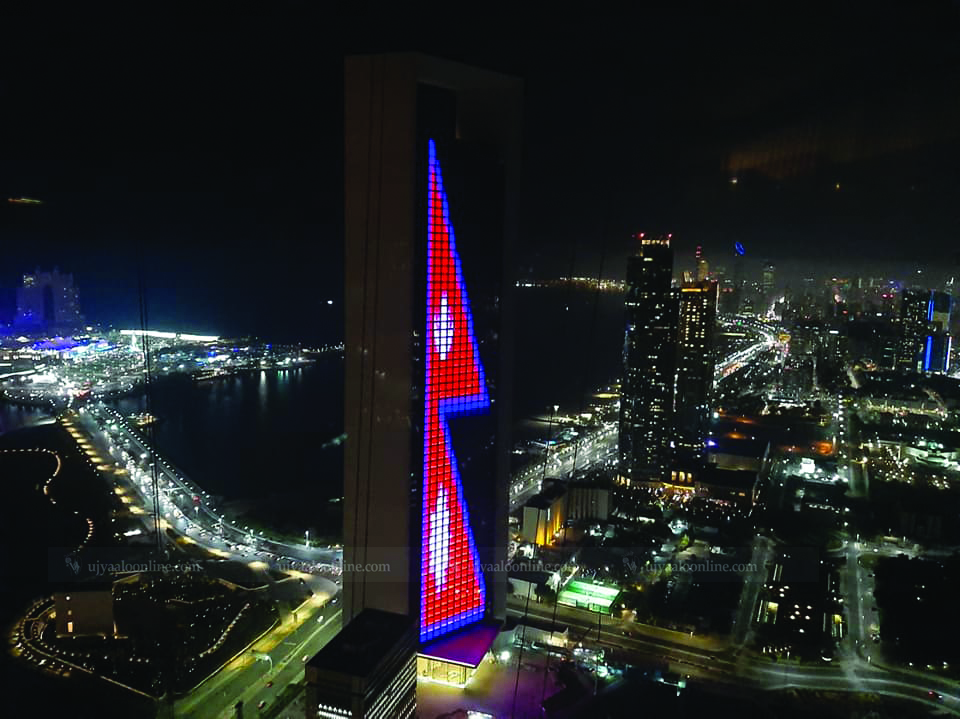 The projection of our national flag onto Burj Khalifa exudes an inspiring message for all of us to rethink, refocus and strategize our united effort to push boundaries of possibility as a nation

On the occasion of Nepal’s fourth national day, the flag of Nepal was projected onto the Burj Khalifa, the world’s tallest building on the eve of September 20. The photographs and videos of the mighty Burj Khalifa engulfed in the flag of Nepal beamed throughout the world of social media. It must have lit up the eyes of the Nepalis in every corner of the world. The famous fountain dance in front of Burj Khalifa and the light show at the backdrop of this record-breaking building is a regular event. But the presentation of the flag of Nepal in this famous light show was no regular event for Nepalis in Dubai who watched it live and for anyone who feels deeply associated with this one of its kind flag in the world.

This event reinforces the fact that nationalism is not an invisible emotion that can just be felt. It does occasionally get physically beamed onto a building.

Flags of various countries have made to this colossal structure. But this was the first time we had the opportunity to witness our own flag become part of this light show. The euphoria brought about by this gesture is an acknowledgment of the Nepali diaspora’s contribution to the development of United Arab Emirates (UAE). Back in June 2016, the majestic view of this colossal structure from the plane window while taking off from Dubai International Airport filled me with regret. I had chosen not to get to the top of this 829.8-meter tall building because I had to let go 300 Dirhams from my pocket which I thought would be put to better use if I got some nutritional supplements for my mother. While this trade-off was acceptable, the regret which I had carried back has been fortunately replaced by the fond memory of this day which reignited that powerful feeling of collectiveness among Nepalis. This respect given to our flag in the iconic light show of this majestic building also acknowledged the iconic unity between the Nepalis who have transcended the test of time and geographical boundaries.

Price and tribute
This acknowledgment has come at a price though. It has come at the price of stories of physical and emotional departure between the loved ones. The story of our flag illuminating over this engineering marvel has re-engineered many stories. There are thousands of parents back home whose health might be dwindling by the minute but are reluctant to talk about it so that it does not hurt the morale of their children at work. Then there are those husbands and wives who dearly miss their partners but put up a brave face during routine conversations. There are those fathers and mothers in Dubai who can witness their child grow in video chat and pictures but carry the pain of being unable to drop them to school, play with them and answer their curiosity about everything that comes their way.

Meanwhile, for those Nepalis who can afford to have their families with them in Dubai, I think they too miss the opportunity to connect their children with their grandparents. Based on the exchange rates of Dirham, Dubai allows a Nepali to amplify his/her income by approximately 30 times. I would have been happier if Dirham could amplify happiness by 30 times which is not always the case. Therefore, the flag in the light show is also a tribute to the families of Nepalis expats in Dubai and throughout the UAE. It is a befitting appreciation to a spectrum of Nepalis in Dubai from somebody on an investor visa right down to the petrol station attendant who battles the scorching heat from the sun, sand, and vehicle in the petrol station.

I feel we are caught in the battle between objectivity and relevance when it comes to Nepalis going abroad for foreign employment. The people in foreign employment are an extension of our diplomatic and friendly ties between the countries of the world and Nepal. Likewise, every Nepali working in the UAE is our respected ambassador who reinforces our values of perseverance, honesty, dedication and finding happiness amidst adversity. It is because of these values that each Nepali demonstrated on a day-to-day basis in the United Arab Emirates that our flag has received due respect in the world’s tallest structure. Athletes bring glory to the nation when they win gold medals but more importantly a country’s flag is hoisted higher than the rest with an anthem. The moment that our flag was digitally hoisted on the building is one such moment of recognition when hardworking Nepalis earned their respect with their sweat. Therefore, it is about time that we changed the narrative and accept the hardworking Nepalis such as those in the UAE as a force to reckon with.

The message
I got myself a glass replica of the Burj Khalifa during the 2016 visit. Ever since it has been a reminder for me that there is always an opportunity to rewrite what is conceivable and expect more when less is not an option because the mammoth structure has, once and for all, redefined the limits of possibility in the engineering world. To limit the greatness of this building into its height alone would be unfair because it is the symbol of a country’s willingness to challenge the edges of human limitations and strive for excellence. The day we can project the flag of United Arab Emirates on our national day on to one of our own modern iconic structures built by the ingenuity of our home-grown talent we will have expressed fitting gratitude to the UAE and the Burj Khalifa for this honor. Therefore, the projection of our national flag onto this inspiring structure exudes an equally inspiring message for all of us to rethink, refocus and strategize our united effort to push the boundaries of possibility as a nation. Long live Nepal and long live our unity.

What should I know about the delta variant?
14 hours ago
SC issues interim order against SSF, asks authorities to stop listing pvt sector employees by force
6 hours ago