Home they came back in coffins 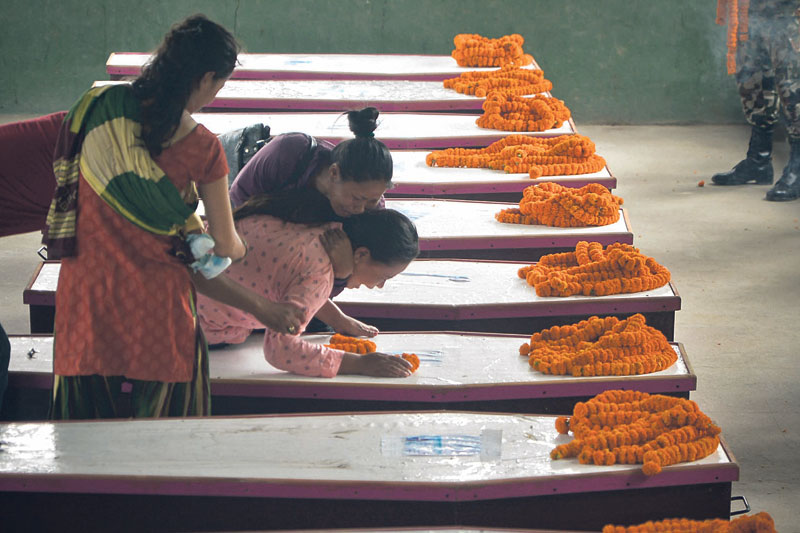 Why have so many people chosen to go to the foreign countries to work despite a risk of death? Why do we produce workers and not entrepreneurs?

On January 23, 18 coffins of migrant workers airlifted from Malaysia landed at the Tribhuvan International Airport in Kathmandu. The visuals from the arrival showed suitcases wrapped with the white clothes. Further, media reports state that 13 more dead bodies of migrant workers in Malaysia are yet to arrive. It is challenging for me to fathom the pain caused by this unfortunate event to the immediate family and friends. These families represent a section of the Nepali population whose battle for redemption does not end within a lifetime, and even their dead bodies have to wait for months to get an honourable funeral rite.

While at the airport, the family members could be seen transporting the coffin in trolleys to the pick-up trucks. This footage was far more disturbing than the coffins themselves because those people returning in dead bodies are our real heroes. As per the World Bank estimates, personal remittances received in the country account for 26.9 percent of the Gross Domestic Product. The money that our migrant workers have sent is helping our country manage foreign exchange reserves, reduce poverty and unemployment and maintain the balance of payments. It is utterly unfair that their dead bodies—who served their motherland with sweat, blood, and life—have to be carried around in trolleys.

Moreover, while they were alive, they were not waiting for government initiatives or support to bring about changes in their lives or their children’s. They instead took it upon themselves to do something about it. The humankind’s unwillingness to accept the defeat in greatest adversities inspires us to do better than we think we can. Don’t we need to draw some inspiration to do better as a nation? Let us ask ourselves do we even feel ashamed about it? I doubt we do.

I honestly hope that we are all angry and share the anguish because such events have become commonplace, making it harder to generate those raw emotions.  However, more than the instinctive expression of discontent and fury, which always tends to have a short life, I hope we are all concerned and worried.

According to the Nepal Labour Migration Report (2020), between 2008/09 and 2018/19 the Department of Foreign Employment granted labour approvals to more than four million Nepalis. Unfortunately, during that period, 7,467 migrant workers lost their lives. However, those numbers should not be used to work out the proportion of deaths because one death is one too many. Likewise, it would be deplorable if one were to feel comfortable thinking that such an ill-fated event has not occurred to them. The numbers are indeed disconcerting, and it is intuitive to think that we have not been able to establish let alone sell the idea of a Nepali dream.

Every citizen does have their thoughts about a Nepali dream. Despite the differences in opinion, I can safely assume that the Nepali dream is not subject to a vision statement of the government’s periodic plans. It has to be organically borne out of the aspirations of the fellow countrymen. It is time that we stopped blaming and start questioning. Let us begin by asking ourselves: Am I working towards a change that I want happening in my country? Are my actions reflective and representative of the Nepali dream I believe in? Or have I forgotten to dream? If the answer to these is a no, I believe one has no right to question people in power because they are not god-sent but people like you and I who have forgotten to dream.

A Nepali household's typical mindset has been that entrepreneurship is a risky career path and salaried work is a safer option. I too fall in that cohort that chose to take the safest route. For my parents addressing the financial insecurities of their time was at the top of their agenda and that is why they learnt to play it safe and it is likely that some of this approach has seeped into my ways of thinking. Hence, I have forgotten to dream or have I not even dared to dream? Unfortunately, the shift in a country’s fortune does not occur unless its working-age population is bold enough to say no to a safer bet.

Hence, I suggest we avoid venting anger in social media and quietly chart solutions that serve a bigger purpose.

Until a few months ago, I was least worried by such news, and even if it did, it would be momentary. But recently things have changed. In three months, I am going to be a father. This news brings a tectonic shift in my life but a paradigm shift in my thinking. Stepping into a father’s shoe, suddenly I am worried about the pollution levels in Kathmandu, the impacts of global warming and the price of pre-school and school education in the city. Hence the list of my concerns and worries has only grown longer, presumably because of my fatherhood bias. The latest addition to what is already a long list is the news about the deaths of migrant workers.

Since 2008, the government has paid over more than 2.25 billion rupees as compensation through the Foreign Welfare Employment Fund in an event of death or disability. I hope that my children benefit from a start-up fund rather than a foreign welfare employment fund.

The time has come for us to have a Nepali dream and pursue it to the best of our abilities. I sincerely hope that the younger generation of Nepalis is looking at this news and asking all the right questions: Why have so many people chosen to go to the foreign countries to work despite a risk of death? Why are people venturing out for opportunities and not creating it themselves? Why do we produce workers and not entrepreneurs?

Elderly people left alone in villages to fend for themselves

SINDHULI, June 29: When Nara Bahadur Pulami, 72, of Otrekot village in Sindhuli was young, he had two daughters and... Read More...

JANAKPUR, July 10; A couple taking a morning walk were rammed by a bus from behind killing the wife and... Read More...