Nepal ahead of other South Asian countries in budget transparency list 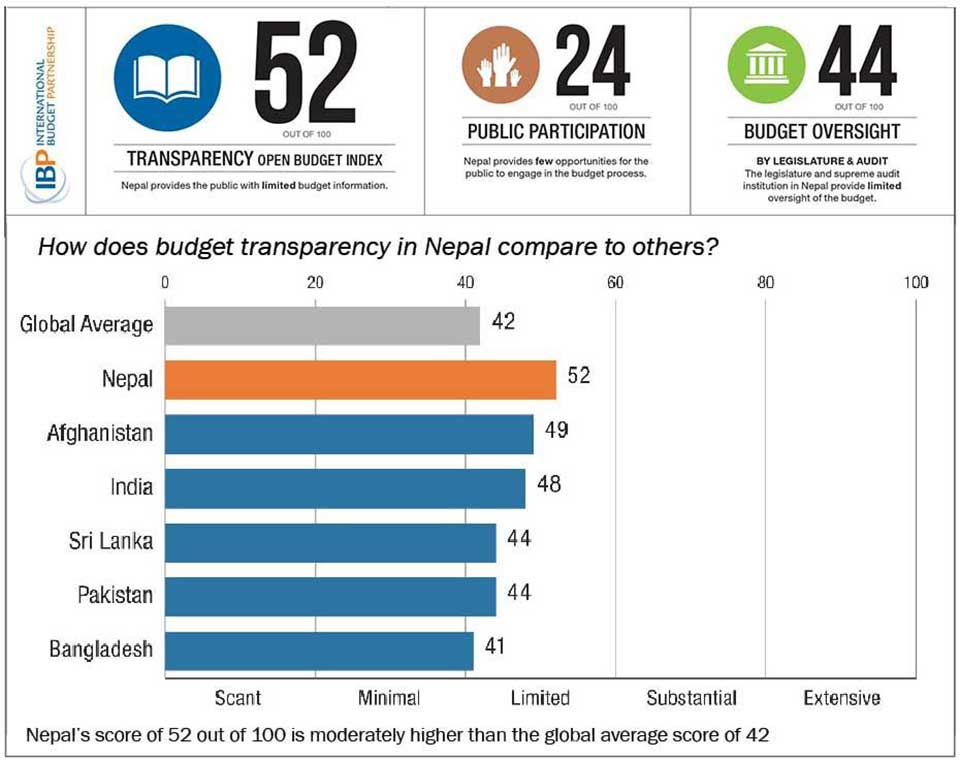 KATHMANDU, Feb 3: Nepal has ranked at the 43rd position in Open Budget Index 2017, out of 115 countries covered in an assessment carried out by International Budget Partnership (IBP). Nepal scored 52 out of 100, showing that the country’s budget transparency is insufficient and limited information is available.

The IBP considers countries that score above 60 on the Open Budget Index as providing sufficient budget information to enable the public to engage in budget discussions in an informed manner.

While Nepal’s transparency as measured through the index is moderately higher than the global average score of 42, its performance in public participating in the budgeting process is dismal. According to the Open Budget Index 2017, Nepal scored only 24 out of 100, showing that the country provides fewer opportunities for the public to engage in the budget process.

The performance of the country toward budget oversight is also not so satisfactory. Nepal achieved only 44 out of 100 which implies that the legislature and supreme audit institution in the country provide limited oversight of the budget.

Nepal, however, is at the top of the list of countries of South Asia included in the assessment of budget transparency, public participation and oversight of a country. Afghanistan ranked at the 52nd position with a score of 49 while India trailed these two South Asian countries with 48 score in the index. Sri Lanka is at the 60th position and Pakistan at the 61st, with both scoring 44. The transparency of budget in Bangladesh (41) is also insufficient with the country remaining at the 66th position, according to the IBP’s index.

Not only the IBP assesses the level of transparency, public participation, and oversight in the budgeting, the organization also provides each country recommendations to improve their performances.

The organization recommended Nepal to produce and publish a pre-budget statement and a citizen’s budget, provide detailed data on the macroeconomic forecast as well as data on the financial position of the government and increase the information provided in the in-year reports and the enacted budget.

Toward enhancing public participation, the government should actively engage with individuals or civil society organizations during the formulation and implementation of the national budget, the report recommended.

“Nepal should consider setting up an independent fiscal institution to further strengthen budget oversight, and also ensure that the legislature is consulted before the executive shifts funds between administrative units,” recommended the report for improving the oversight on the budget.