Needy provided with goats for income generation in Dhading 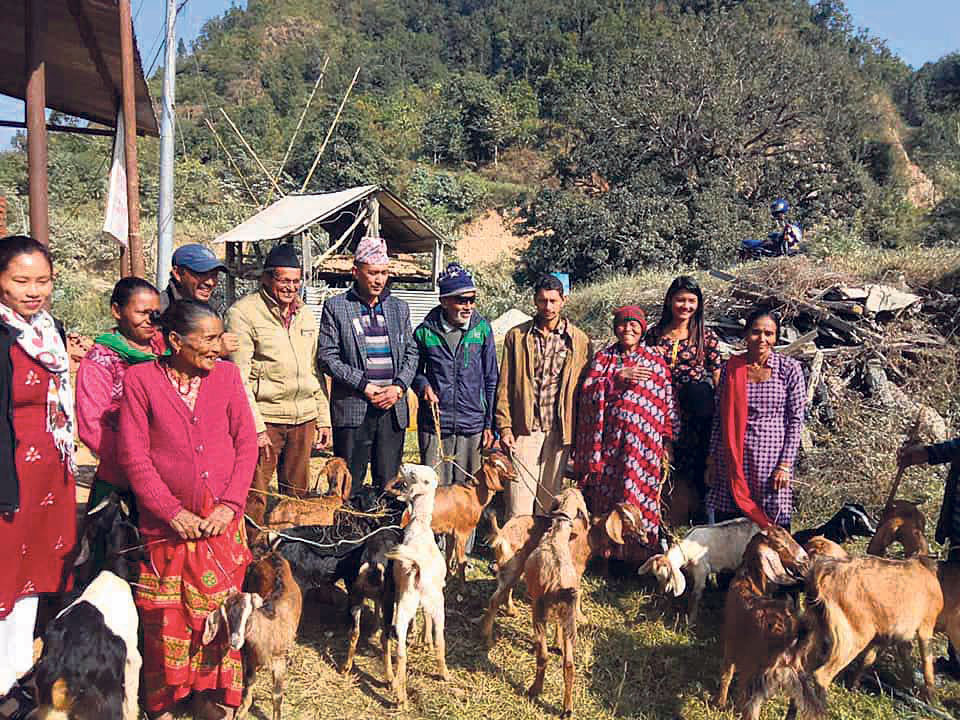 DHADING, Dec 15: Tek Bahadur Parajuli, 69, of Gajuri Rural Municipality-7, is bedridden due to some childhood illness that gradually turned worse and made him unable to walk. His wife takes care of him. Because of the disability, he has been unable to earn for himself. Bihani Project, in coordination with the rural municipality, has provided him with two goats as a means for income generation.

The project has also provided two goats to Dipa Bhujel, of Gajuri Rural Municipality-8 Banke Chaur. Her husband had died two years ago. Now she is living by herself.

The death of her husband brought a financial catastrophe for Bhujel. She had to struggle a lot just to make her two ends meet. She had to take care of the family, and the society totally disregarded her. Bhujel struggled to sustain her life by farming, which was hardly sufficient.

"It is hard to get two meals a day when there is no reliable source of income," said Bhujel. "I have received goats for income generation and I will take care of them."

Bihani Project has distributed goats free of cost to 94 people in different parts of the Gajuri Rural Municipality. The recipients comprise of 20 differently-able persons, 17 single women, 17 senior citizens, 29 families deprived of food, and a displaced family. Each of them has been provided with two goats, according to Rakeshna Basnet, community development facilitator of Bihani Project.

The main occupation of the locals of this area is cultivation of food grains and vegetables. They make some income from vegetable farming. Currently, they are involved in commercial livestock farming. Pampha Chepang of Gajuri Rural Municipality-4 thinks that after receiving the goats, they have been motivated toward livestock farming. Use of old technology is not much helpful for income generation, so they are trying to modernize the technology and marketing methods.

Ram Maya Chepang, of Shyamedada in Gajuri Rural Municipality, takes care of her differently-able daughter by herself. Her husband died one and a half years ago. She said the two goats came as a relief for her. It will help in sustaining her and her daughter's life as she has very weak financial condition.

Basnet said that the objective to distribute goats to the locals was to enable them financially, so that they could stand up to the society. "We have prioritized differently-able people, single women, senior citizens, and people from low income families," said Basnet. "Violence against women will be decreased if they become financially independent."

Amid apprehensions of food scarcity, urbanites resort to vegetable farming

KATHMANDU, June 3: Had it been a time when the world was not exposed to the Coronavirus (COVID-19) pandemic, Sanjib... Read More...

DHADING, March 22: Locals of Khaniyabas in Dhading district used to depend on Dhading Besi for vegetables for everyday consumption... Read More...

RUPANDEHI, Nov 17: Adhikari Vegetable Farm of Suddhodhan Rural Municipality-3 of Rupandehi had got a grant of Rs 400,000 from... Read More...