Bamboo becomes source of income for locals of Tikapur 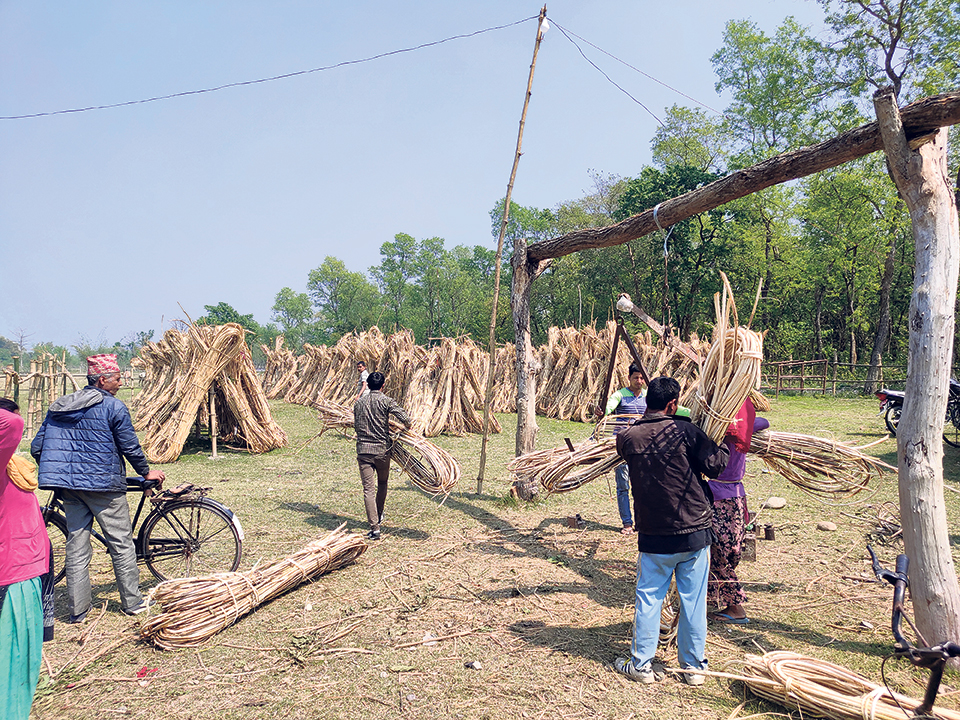 Bamboo stripes collected by the consumers left under the sun. Photo: Yogesh Rawal/Republica

TIKAPUR, March 21: Satti Karnali community forest at Tikapur Municipality has become a lucrative source of income for the locals in the area. The locals had been earning income through fodder, log among others but now bamboo has become one of the major income source.

The community forest has been coordinating with the locals while cutting the bamboo trees. The locals get Rs 9 for cutting a kilogram of bamboo. For this year's bamboo cutting program that started from Saturday, about 300 locals are involved.

Dhansingh Saud, chairman of the community forest said that, the committee has plans of chopping the most bamboo trees this year. He informed that last year, a total of 350,000 kilograms of bamboo trees were cut. “This year, more bamboo trees will be cut as the plot is huge,” he said.

Similarly, Mansara Dhungana of the same municipality has cut 27 kilograms of bamboo in a day. She has been engaged in this activity from day one. She said that the earning contributes to her household expenses.

The community forest keeps the record of the workers about their workload. Maniram Dhungana, treasurer of the committee said that, the payment is made only after the work is completed. “We keep daily record and make payments accordingly,” he said, “If paid once after the completion of the work, they can use the sum for something useful.”

Of the total 258.63 hectares of forest area, bamboo is cultivated in 145 hectares. There are 1,123 members of the community forest.

TIKAPUR, August 23: Two years have passed by since the heart-wrenching Tikapur incident in Kailali district, in which eight police personnel... Read More...

DHANGADI, June 16: The government on Friday provided hefty compensations to 'victims' of the infamous Tikapur incident of 24 August, 2015... Read More...